This page lists all the release for Papyrus-RT.

Note
All future release definitions (MVPs) may change at any time, both in their content and in their release order. Please refer to this page for up-to-date information.

Initial contribution to the Papyrus for Real Time project

Neon releases will be made under the principle of Minimal Viable Products (MVP). In concrete terms, as Papyrus-RT is concentrating on getting out of incubation, each release will be determined by a set of feature for its release and not by an arbitrary calendar date. We feel that this better reflect our quality goals and our engagement with our users. In addition, at least until v1.0 is out, we will be proceeding with a feature-boxed approach to release delivery. This means that we will not release software before it's time (to paraphrase a famous Advertisement). Given we are not (yet) part of the Eclipse release train, we have some flexibility in doing this, while still trying to align to the Eclipse releases whenever possible.

This MVP focuses on the usability of the UML-RT capsule-based structural collaborative modeling environment, with the addition of basic state machines, basic model-level language support, and C++ code generation to a UML-RT runtime on Linux. All this implemented as a domain-specific modeling language on top of Papyrus. 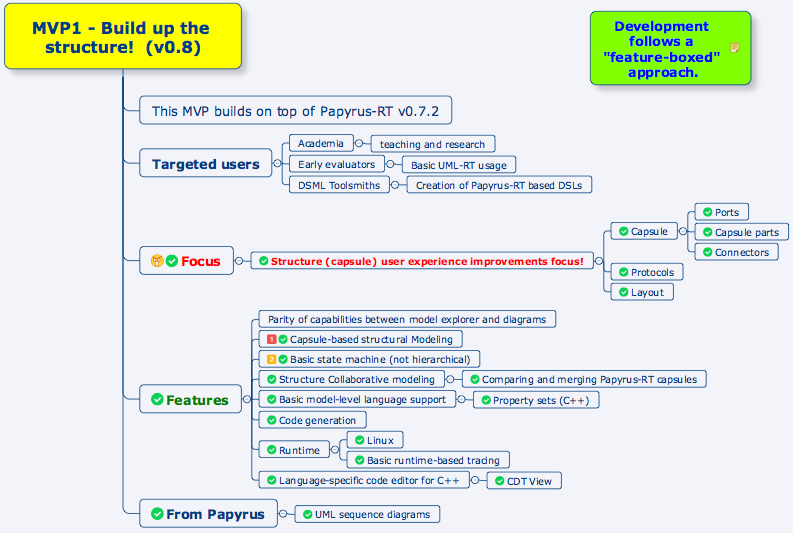 This MVP focuses on the usability of the UML-RT behavioral collaborative modeling environment, including support for UML-RT hierarchical state machines, as well as structure, protocol, and behavior (state machine) inheritance, default language support, an improved C++ code editor, and updates to the code generator and runtime on Linux and the addition of Windows, and Mac OS X targets. We consider this MVP a v1.0 candidate. Whether this is a 0.9 or a 1.0 version will depend on the quality achieved.

Note
This release serves as the beta for v1.0 (see next release) 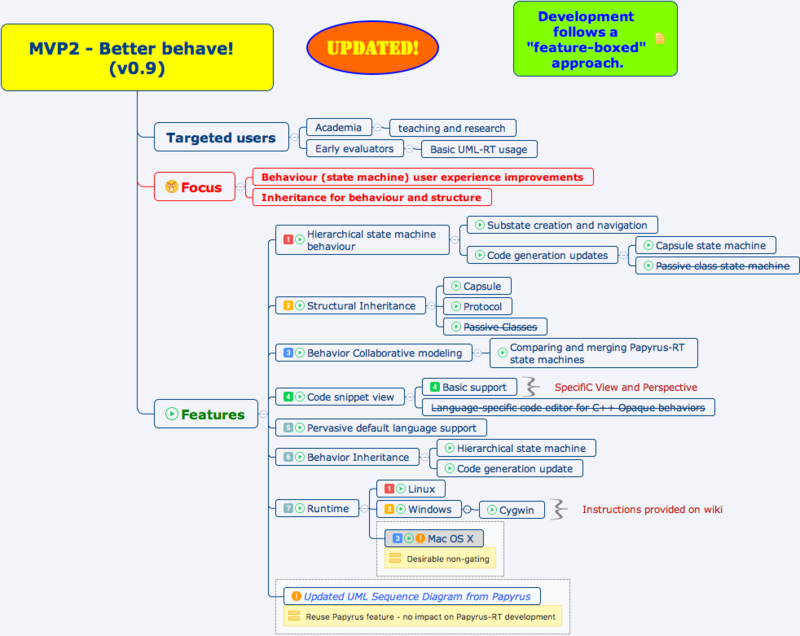 This MVP focuses on completing the work that was started in MVP2 on Neon and moving forward to the Oxygen Papyrus releases. 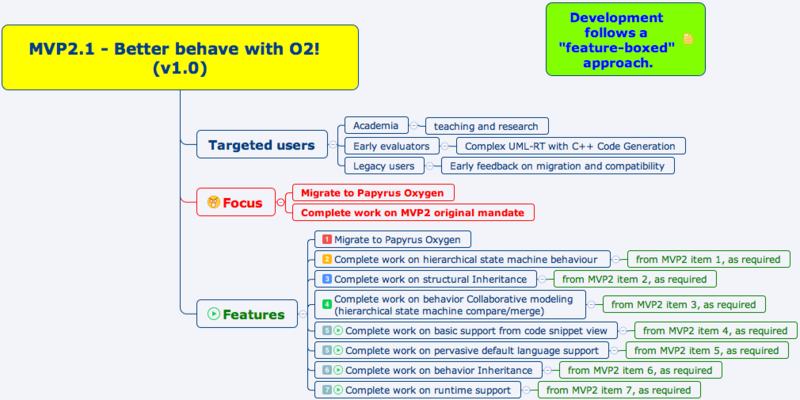 Papyrus-RT/Releases/Oxygen v1.0 Release Notes (What you need to know before you use this release)

Papyrus-RT MVP3 (v TBD) - Build it and they will come!

This MVP focuses on the build and transformation configurations for models and UML-RT sequence diagrams.

This MVP focuses on class modeling withinn Papyrus-RT. Traditionally, all ROOM/UML-RT structural modeling has been done at the capsule level. Sometimes, it is useful to represent the system as classes, showing the relationships between the classes, capsules, protocols, etc. 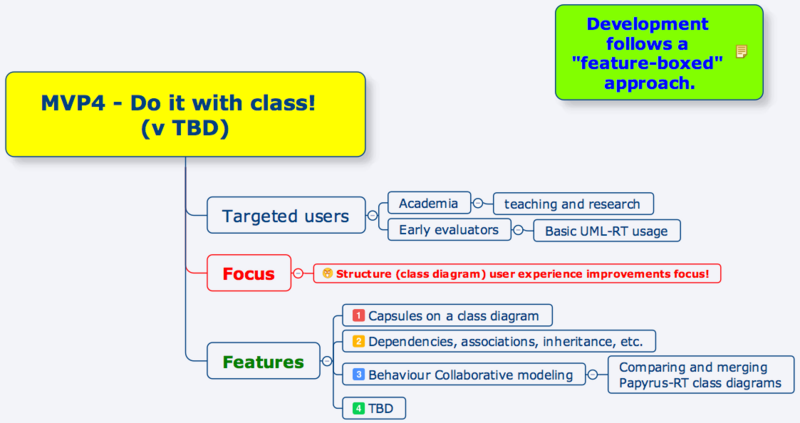 This MVP focuses on added activity modeling to Papyrus-RT, enabling the use of UML activity diagrams to express functionality. In the UML-RT world, this is typically used to describe state machine actions. 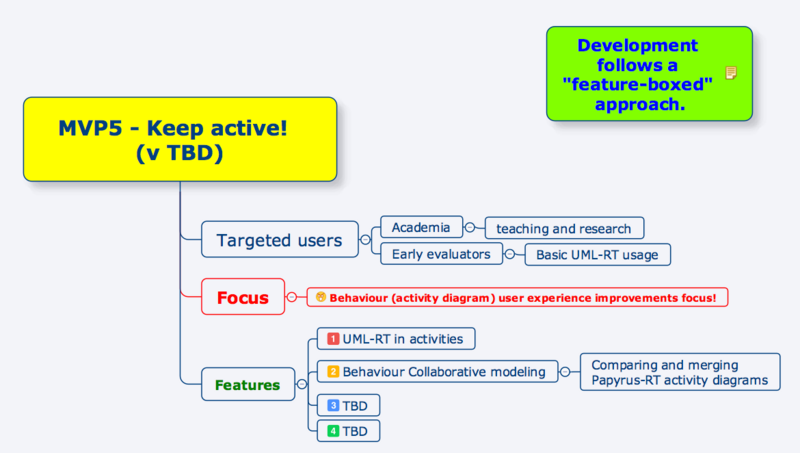 This MVP focuses on adding a full textual language to Papyrus-RT that supports full synchronization with diagrams, enabling developers to work in both textual and graphical environments. 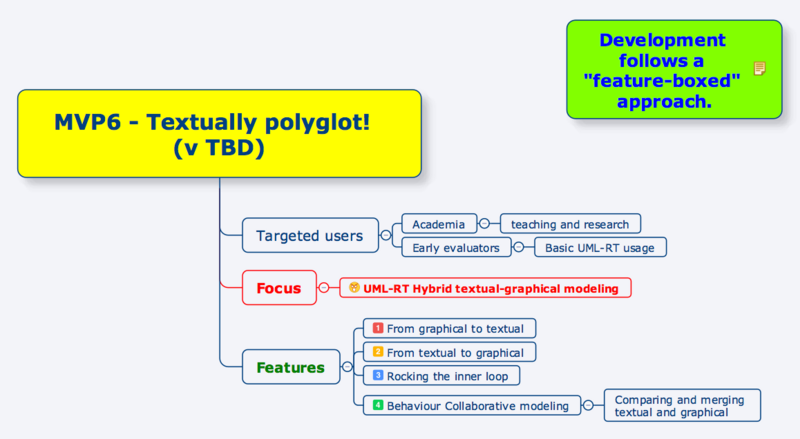