Like every project, Acceleo is evolving and we are always working on some prototypes on what could be in the next version of Acceleo. For that, we built a wishlist with some exciting features that we would like to have in a future version of Acceleo but from time to time we also are working on potential architectural improvements for Acceleo or sometimes on "what Acceleo could look like in the future". Those reflections on Acceleo do not suffer from the typical restrains of the work on a new feature as they don't require same level of stability and we don't prevent ourself from breaking any API for example. 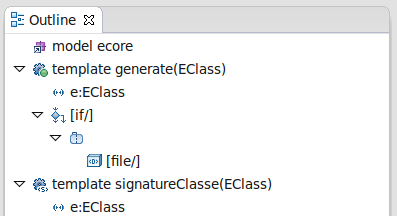 Screenshot of the outline of Acceleo on e4

One of those works drove us to imagine what Acceleo would look like on the e4 platform. For those who don't know about it, e4 is the incubator project of the next major version of Eclipse. This new version of the platform introduce lots of major changes in the way Eclipse plugin are created. As such, in summer 2010, we started an evaluation of the e4 platform by porting a prototype of Acceleo on e4. You can find here, some screenshots of this prototype and the feedback of the Acceleo dev' team on this experience.