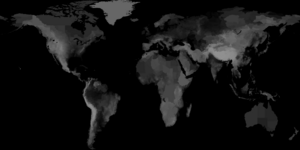 This page was last modified 15:09, 25 March 2020 by James Kaufman. Based on work by Judy Douglas, Stefan Edlund and James Kaufman.