This page provides the required Docuware for the EGF v1.0.0 Release and Graduation Review, as part of the upcoming Juno Simultaneous Release.

EGF is a software factory tool which enables to develop simple and complex generators. A workflow enables to orchestrate and execute different kind of tools (e.g., ATL for model-to-model transformations, Acceleo for model-to-text transformations) and code written in a language (e.g., Java, Ant, JRuby). EGF also includes a declarative formalism of pattern with the capability to develop customizable generations. The extensibility of EGF enables to support new tools or languages for orchestration, and to support new types of generation formalisms. All the generation elements are encapuslated in factory components. A coherent set of factory components defines a generation portfolio reusable and customizable in different project contexts. EGF is released with two demonstrative and operational generation portfolios. The first one enriches the EMF generation with new features: i) generation of new types of artefacts (e.g., JavaDoc, ecoretools diagrams), ii) customization of the EMF generation with patterns, iii) a generation DSL to easily configure an EMF generation. The second EGF portolfio is a DSL and generator for continuous integration in order to facilitate the definition of continuous integration chains and to target new integration continuous platforms while the continuous integration tools evolve.

EGF is part of an Eclipse Simultaneous Release for the second time. The different features provided by EGF v1.0.0, as part of Juno, are of three categories: the engine, extensions, and portfolios.

A generation portfolio is a consistent set of factories with a generation objective, reusable and valuable for projects.

The EGF Javadoc is available here (from the Juno build).

The "development & reuse process" below displays how portfolios can be iteratively combined to create new factories and extensions. 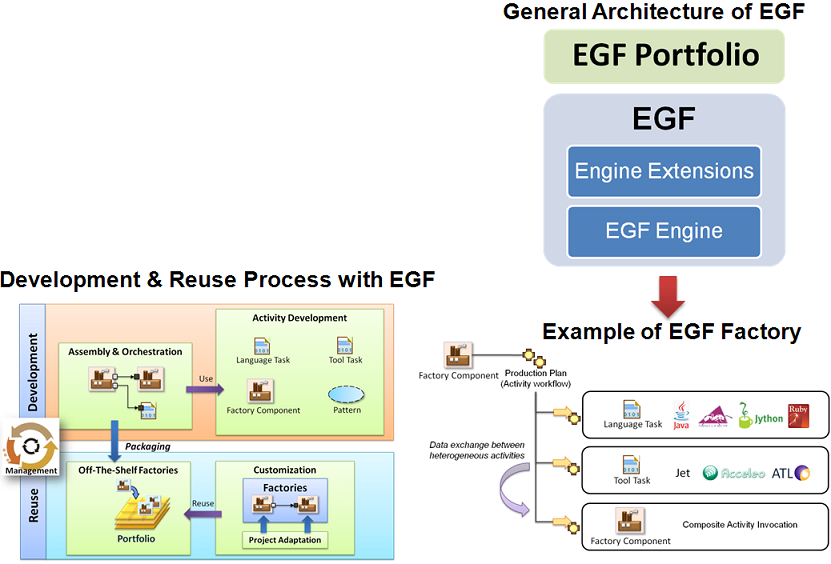 EGF uses a Buckminster-based system to build and promote versions.
Each new build is tested at least with Eclipse 3.8 (Juno).
Core plugins are provided with dedicated test plugins checking their valid behavior.
EGF is integrated into the Juno Release Train since the M1 release.
EGF is also part of the Amalgamation Modeling Package for Juno.

EGF was presented at different conferences during 2011-2012:

Communication on PlanetEclipse is used for the EGF news.

EGF is identified as a component of the Polarsys IWG.

The two EGF portfolios was selected to attract the modeling community with the EMF Generation extension, and users from other communities with the Build portfolio.

After graduation, EGF has to move out from EMFT to EMF.

Site: no impact (Before Move: http://eclipse.org/egf/)

The current project plan is available from here. This next EGF version would include: