The BPMN example of the VIATRA-DSE framework

This page gives an introduction to the usage of the VIATRA-DSE framework based on the BPMN domain.

Description of the problem

As an example a simplified business process of a web shop is presented, see the image below. After authorization (i.e. the user is signed in) the request can be either about purchasing (e.g. editing user information, paying with a bank card, etc.) or about browsing items. In the later case recommendations are calculated in parallel with fetching item data and logging. All tasks need a particular resource either a web server, a SQL or a NoSQL database. 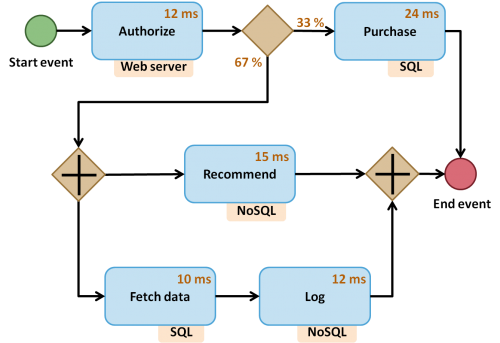 Resources can have multiple variants, which have different characteristics. For example the SQL and the NoSQL resources hava a second variant which perform better (i.e. they have shorter execution time) but has extra costs:

The problem is to optimize the business process on response time, resource utilization and cost by assigning resource variants to each task and create enough resource instances for the variants' pools. Furthermore the business process can suffer from bad design which could pull back the performance of the system. For example, the Fetch data and Log tasks could be executed in parallel.

However, optimizing a process with respect to multiple objectives (e.g. response time, resource usage, etc.) is a time consuming and erroneous task. Running simulations with different parameters is required to find an optimal solution, while evaluating results to identify a promising configuration is essential. In addition, contradicting objectives may be present (e.g. increasing resource utilization can lead to reduced throughput) and design flaws could prevent better performance. VIATRA-DSE can automate the process to go through different design candidates and find the optimal one.

This section gives an idea how to model a design space exploration problem and prepare it for using the VIATRA-DSE framework. 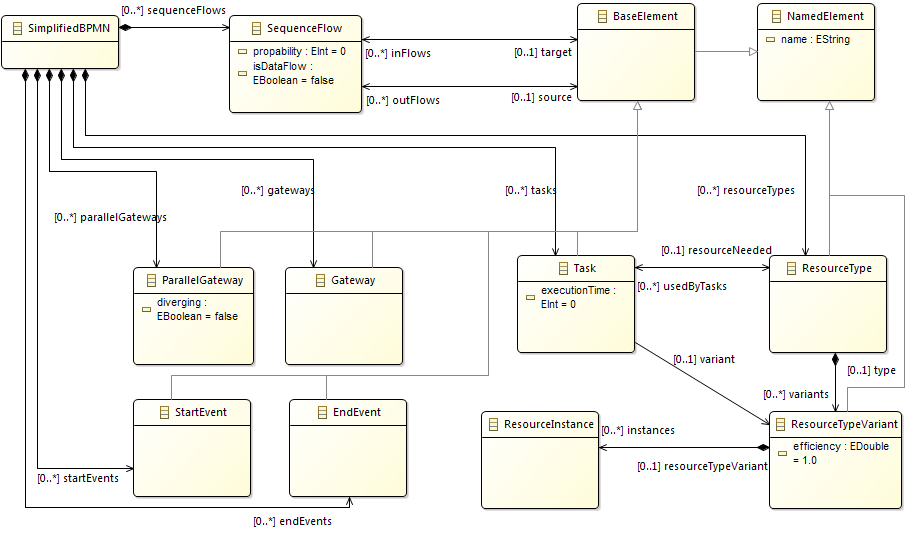 The second step is to define the instance model (i.e. any business process workflow), the previously shown web shop example with the resource variants can be an ideal example for that. This will be the initial model of the exploration process.

The transformation rules specify how the exploration process can modify the initial model. For this example four rules is specified, namely:

Priorities of the rules (if used by the exploration strategy) can be found in brackets.

There are three main objectives and a fourth objective is defined to help the traversal strategies:

In this example all of the currently available exploration strategies will be shown:

The VIATRA project has a separate repository on Eclipse for the examples. The BPMN example projects can be found under the dse/bpmn folder after cloning the git repository:

Structure of the example

This example is structured into three projects:

The model project contains the EMF metamodel: the .ecore, .aird, .genmodel files and the generated code.

The patterns project contains the IncQuery patterns (.eiq file) and the generated code.

The dse project contains all of the manual code for the dseign space exploration.

To run the example, find the org.eclipse.viatra.dse.examples.bpmn.dse.BpmnExample class and run it as JUnit plug-in test'. Please see this link, if you are unfamiliar with this run configuration: VIATRA/DSE/UserGuide/API#Run_configuration