The Introduction to Compartment Models describes how an infectious disease evolves in time. STEM also allows users to represent the geographic distribution of people (or animals) and how they move about in space. A compartment model that deals only with the trajectory of a disease in time implicitly assumes that the population (or populations) in question is so well mixed that there is no need to model the spatial distribution of people. However, for very large scale simulations, the details of population distribution, transportation, trade, even wild bird migration can all be important factors in understanding the evolution of an infectious disease in space and time. The following page describes how Transportation Models are implemented in STEM.

Without going into the complete details of a Spatiotemporal Compartment model, let’s look at the interaction term defined in equation <1a>. Imagine that this equation is being used to define the rate at which infectious people at some particular location j cause susceptible people at the same location j to become infectious. We might then write the same equation as:

Let the rate of infection in the population j form mixing with population k be:

Then the rate of new infections (incidence rate) in population j is:

Under these assumptions, the within patch reproductive number is:

where the sum is taken over all sites k. The vectors that connect different locations are represented by the set of mjk. Connections need not be only between adjacent locations. For example, air travel map provide connections between distant sites.

In the future STEM will also provide edges that model motion specific to particular populations or species. These new Mixing and Migration'' Edges will associate a transportation rate with the population by name.

Not all administrative regions are the same size. The STEM model for mixing or circulation of a population scales the mixing rate by an effective depth  λ for each region. This is analogous assuming a skin depth or average mixing length scale. The figure below shows a simple example of two adjacent nearly square regions of area Ai and Aj respectively. 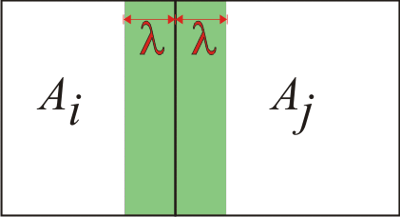 Today STEM uses the simplest possible approximation for the characteristic mixing in this model, the fraction of people leaving site j for any neighboring site i becomes:

Where the average mixing length, 𝜆o, is determined as part of an optimization process. Typically we find 𝜆o ≲ 45km.

In reality, the polygons in STEM are quite varied in shape. The figure below shows two adjacent regions (again with simple shapes) associated with a common border of length ℓij 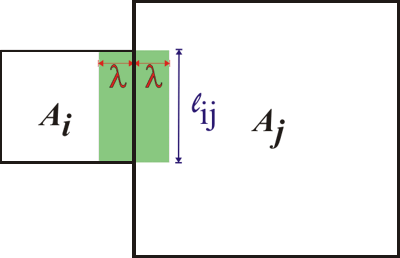 In this example a better approximation for the fraction of people leaving site j for any neighboring site k is given by:

The mixing edge graph generator creates the graph of mixing edges with a user-specified default value. Users are free to edit the (generated) .graph file and specify individual rates for each mixing edge. The advantage to a custom mixing model is its transparency (each edge lists its mixing rate). The disadvantage is that it is up to the user to define these rates or to implement an algorithm to set or reset them. IF a user graph contains ANY custom mixing edges, STEM will NOT iterate the default internal mixing model described above.

Unlike population mixing which modifies the terms in a disease model computation, migration is a property of the population itself. The figure below shows a simple example with two locations, i & j , each containing a population of humans and a population of geese.

Today STEM provides a tool to generate a graph of migration edges for an existing lattice graph. In the future new tools will be provided including a graphical editor to allow creation of specific edges and a function to import a graph from a user-defined file.

This page was last modified 12:55, 16 January 2013 by Stefan Edlund. Based on work by James Kaufman, Judy Douglas and Matthew Davis and others.