Work out the concept for IRM interface. Cover the aspects of Agents/Crawlers and partly Connectivity in it.

The basic idea is to provide a framework to easily integrate data from external systems via Agents and Crawlers. The processing logic of the data is implemented once in so called Controllers, which use additional functionality provided by other components. To integrate a new external data source only a new Agent or Crawler has to be implemented. Implementations for Agents/Crawlers are NOT restricted to Java only\!

Here is an overview of the suggested technologies. Other technologies might be suitable as well and a switch should have only minor impacts on the concepts described below.

The chart shows the architecture of the IRM framework with it's plugable components (Agents/Crawlers) and relationship to the SMILA entry point Connectivity Module. 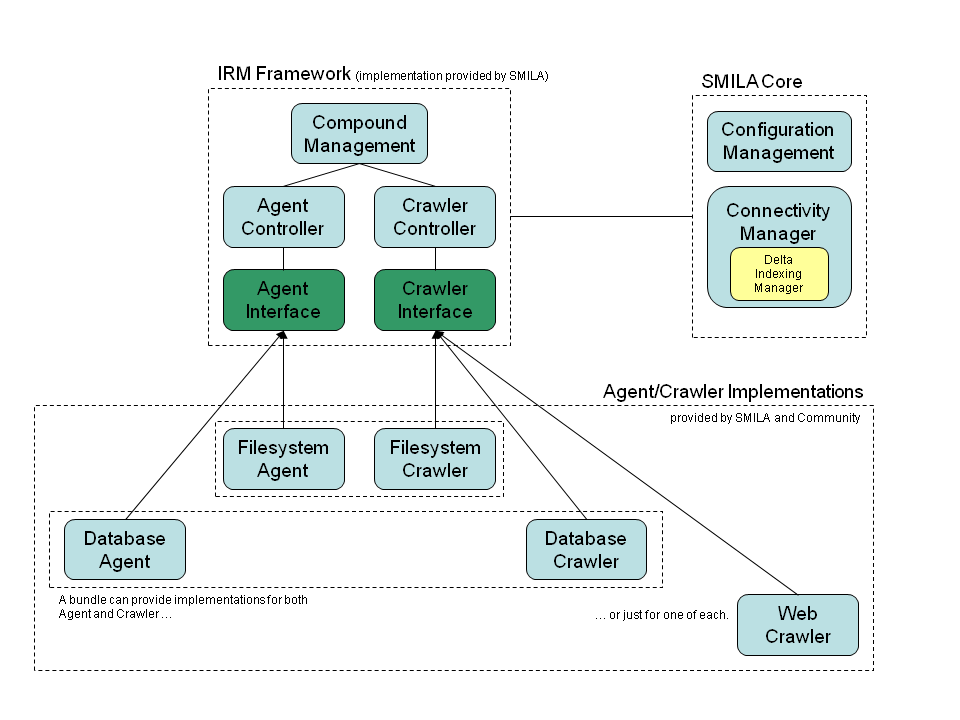 The IRM Framework is provided and implemented by SMILA. Agents/Crawlers can be integrated easily by implementing the defined interfaces. An advanced implementation might support even both interfaces.

The Agent Controller implements the general processing logic common for all Agents. It's service interface is used by Agents to execute a add/update/delete action. It has references to

Agents monitor a data source for changes (add/update/delete) or are triggered by events (e.g. trigger in databases).

The Crawler Controller implements the general processing logic common for all Crawlers. It has no service interface. All needed functionality should be addressed by a configuration/monitoring interface. It has references to

A Crawler actively crawls a DataSource and provides access to collected data. {info:title=Useful Information} Premium Crawlers (provided by brox or empolis) should optimize their performance by using Producer/Consumer pattern internally. Where one thread gathers the information and stores it in an internal queue and the Crawler gets the data from the queue. Of course it depends on the data source if this pattern is applicable. At least for Filesystem and Web it works. {info} \\

Handles processing of compound objects (e.g. zip, chm, ...). It does NOT implement the "Process Compound Logic" described below\! This has to be done by the Controllers. See SMILA/Project_Concepts/CompoundManagement for details.

This is a Sub-Component of the Connectivity Module. Stores information about last modification of each document (even compound elements) and can determine if document has changed. The information about last modification could be some kind of HashToken. Each Crawler and the CompoundManagement should have it's own configurable way of generating such a token. For Filesystem it may be computed from last modification date and security information. For a database it may be computed over some columns. Some of it's functionality is exposed trough the Connectivity Module's API. See SMILA/Project_Concepts/Connectivity#Delta Indexing Manager for details.

Creates and new Crawler object with the given Configuration and returns it.

The Crawler's method getNextDIRecords() returns arrays of DIRecord objects. If no more DIRecord objects exist it returns null to signal end of "iteration". The maximum size of the returned DIRecord[] should be configurable. Some Crawlers may only allow for size=1, because of implementation limitations. For each DIRecord returned, the CrawlerController applies DeltaIndexingLogic. Only those DIRecord objects that are new or have changed are requested by method getRecord() as full Record objects, using the position in the DIRecord[] to identify the Record. This is used like a frame on current DIRecords. If getNextDIRecords() is called again, the frame moves on to the next elements.

How to implement the interfaces

The idea is that integration developers only have to implement Agents and Crawlers. The Agent\- and Crawler Controllers should be provided by the framework, prefferably developed in Java. Initial implementations for Components like Compound Processing and Delta Indexing Manager should also be provided by the framework, but it should be possible to replace them by other implementations. So most of the time developers will create new Agents and/or Crawlers. These can be implemented in any programming language that is supported by an SCA implementation. An implementation could support both Agent and Crawler interfaces, but should never be forced to implement both\! This makes development of a Agent/Crawler for a specific purpose much more easily.

Different implementations of the Delta Indexing Manager may be interesting in regards to performance and storage of this information, e.g.it could be stored directly in the search index.

Regarding the discussions about Crawler (formerly Iterator) interface design, I setup some performance tests to compare a classic Iterator pattern (1 object at a time) against the proposal to use a list of objects. I tested it with a FilesystemCrawler that iterates on Delta-Indexing information only (an ID and a hash). The implementation uses a blocking Queue with a maximum number of elements (capacity). The Crawler itself returns a list of objects with a configurable maximum number of elements (step).

The test iterates over a directory containing 10001 html files (it does not open the file content, it just reads the path and last modification date). Using plain java objects (no SCA) it takes about 600 ms, no real difference is measurable. But we want to be able to distribute the software components. Therefore I also used SCA in the tests. SCA incures some overhead, as proxy objects are used with any binding mechanism.

So, it's quite obvious that with SCA and especially with remote communication there is a big difference between single object iteration and lists. Therefore the Crawler interface should support lists. If a special implementation is not capable of supporting list it is still possible to set step to 1. 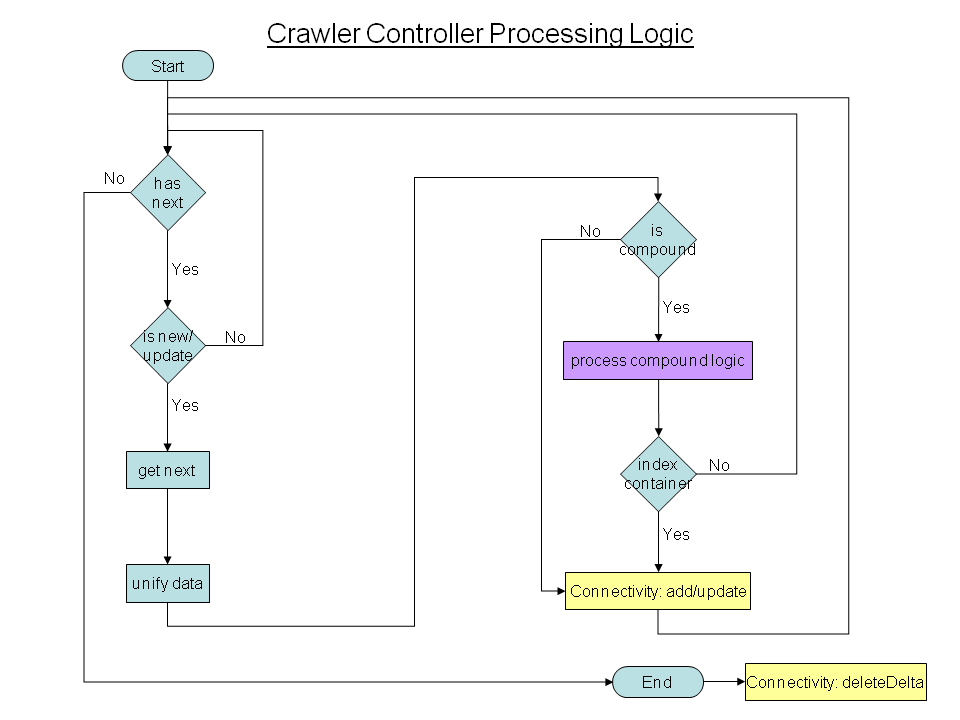 The Process starts when a Carwler was created from a CrawlerFactory and received by the CrawlerController. The logic checks if there is a next data element. If so it checks if this data is new or has changed using the Delta Indexing Manager. If so, then the data is retrieved and unified in a generic representation. Then it is checked if the data is some kind of compound object (e.g. zip) and the Process Compound Logic is triggered. Otherwise the data is sent to the Connectivity Component. For Compound objects it may be configured to (not) send them to the Connectivity Component. 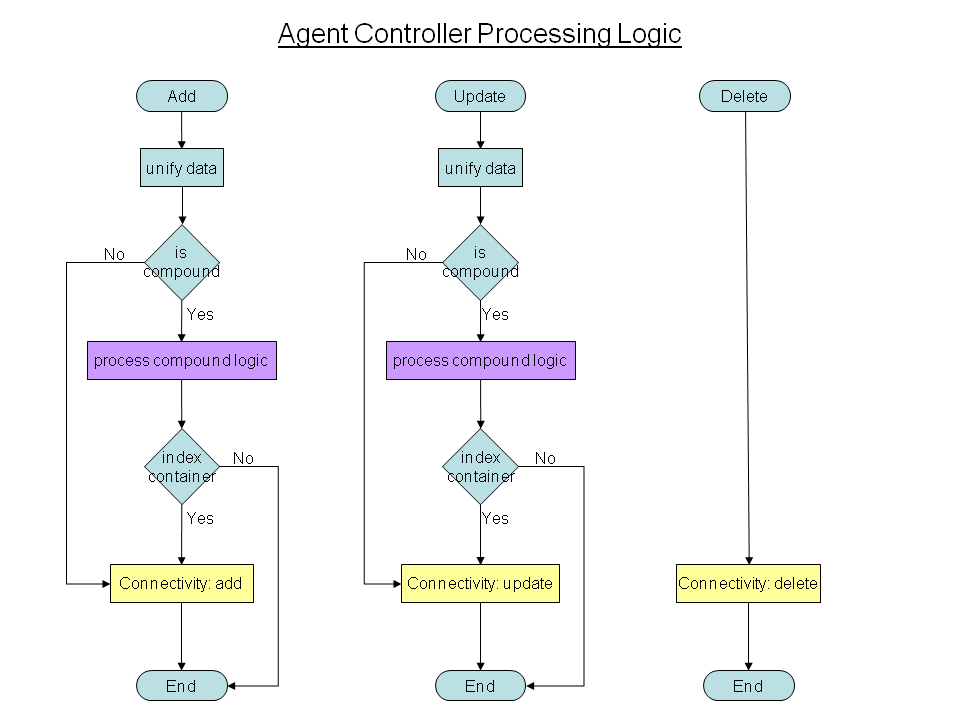 The Agent Controller provides the 3 processes Add, Update and Delete.

{info:title=Note}There is a special case in Agent Controller Processing Logic during "Update" that is not shown in the chart: After the Process Compound Logic is done, we need to check if there are elements in the index that need to be removed (that were formerly included in this container). So we need functionality to perform deleteDelta() on a compound object and it's subelements in addition to performing it on a whole dataSource. {info}

This chart shows the Process Compound Logic in detail: 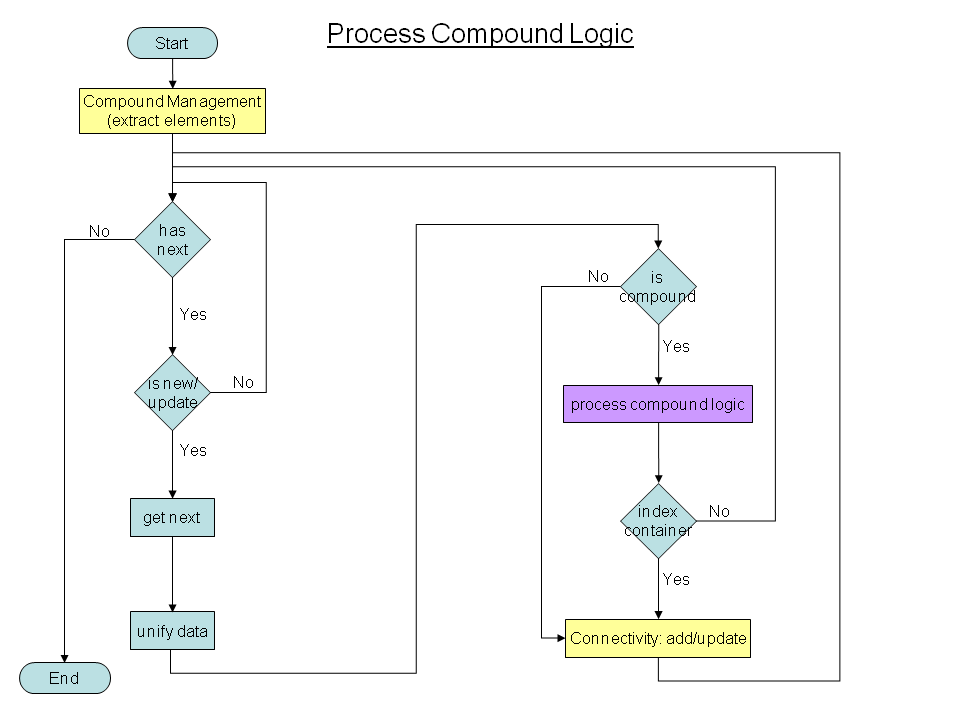 This processing logic is NOT implemented in the Component "Compound Processing", this component is only used to extract the data and provide functionality to iterate over it. This logic is implemented in the Agent\- and Crawler Controllers. The Process Compound Logic is very similar to the Crawler Controller Processing Logic. The main difference is that before iteration, the Compound object's elements have to be extracted (using the Compound Prosessing Component). Note that Process Compound calls itself recursively if an element is a Compound object. This is needed, because you may have zip in zip in ... {info:title=Note} The Process Compound Logic uses Delta Indexing Manager to determine if an element has to be added/updated. There is a special case in Agent Controller Processing Logic during "Add": Here the agent knows that the Compound object and all it's elements are new. No check against the Delta Indexing Manager is needed here. Also no check for objects to delete must be performed. This is not shown in the charts, as this is only a minor performance issue that complicates the process. Nevertheless, this logic should be implemented. {info} \\

All data from various data sources has to be represented in a unified format. This includes functionality to normalize the data (e.g. one representation for date formats) and a renaming mechanism for data identifiers (mapping of attribute names). Both should be configurable.

The resulting format could be an XML like structure:

Each attribute has a name and a data type (string, int, double, date, boolean, byte\[\]). If an attribute has multiple values this can be represented by multiple <value> tags. In case of data type byte\[\], the <value> tag should NOT contain the bytes but a link to where the bytes are stored. {note:title=Dependencies} This whole process has to be specified in more detail. But the process depends on what data structures the following processes expect and how and where the data is stored. (e.g. XML database)

Juergen Schumacher : We need an an XML format for SMILA objects anyway. Probably we should reuse it here instead of inventing a second one. It will have to be a bit more complex, though. {note} \\

Configurations for Agents/Crawlers should share as much as possible and should be extendable for new DataSources. This has to be specified in detail. Here are some ideas what configurations should contain:

For certain use cases it may be desirable to easily combine Agent and Crawler functionality. E.g, an Agent monitors a folder structure in the filesystem. Because of some network problems the Agent doe not monitor all changes made in the meantime. A user may want the Agent to automatically synchronize the current state of the folder structure with the search index. Thus - the folder structure needs to be crawled using delta indexing.

Of course the IRM supports this use case, but the logic "what to execute when" has to be provided externally (by a user). Can we provide functionality that allows an Agent to execute a crawl on it's monitored data ? What are the requirements ?

The following issues must be addressed and specified in detail: