As Lucene IndexReaders only have the index state of the time the index was opened available, they have to reopen the index from time to time to be up to date. The only posibility is to poll the index on a regular basis. This could be done in the Lucene Query Service or more genereal using some scheduling service of SMILA.

This chart shows the Connectivity Manager, it's Sub-Components and their relationship as well as the relationship to other components : 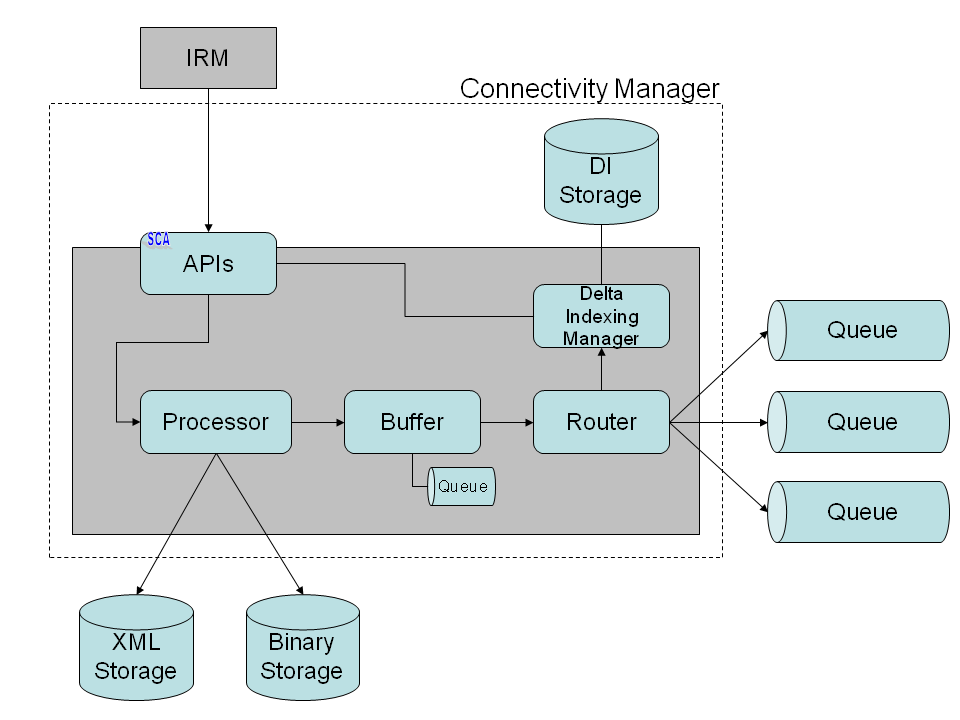 The Processor also creates the message object to be enqueued. A message contains the unique ID of the object, the Delta Indexing hash, routing information and any additional needed information. It should be configurable what information is part of a message. The Processor should also be able to standardize incoming objects (either Records and/or MessageObjects of the 2nd alternative interface design) to the latest version (internal representation) or to reject them.

The Buffer delays the enqueueing of outgoing messages. Therefore it needs a seperate Queue mechanism to temporarily store the messages. This has not to be mistaken with the Queue Servers\! The Buffer provides functionality to detect and resolve competing messages (add/update and delete of the same document).

For a first release the Buffer functionality is of low priority (P2).

The Router routes messages to according Queues and/or BPEL workflows. The routing information (what whereto) has to be provided by configuration. The Router also has to update the Delta Indexing information accordingly. Neither the IRM nor the Connectivity Manager get's any feedback if/how a message was processed (successfully or if some error noccured). The only feedback the Router (and so the Connectivity Manager) gets is if a message was enqueed or not. Therefore after a message was successfully enqueued one of the following actions must be triggered by the Router:

It may be neccessary to directly access the Router after a BPEL workflow has finished to route a message to another Queue and therefore expand the API.

The Delta Indexing Manager stores information about last modification of each document (even compound elements) and can determine if a document has changed. The information about last modification should be some kind of Hash computed by the Crawler (see IRM for further information.) It provides functionality to manage this information, to determine if documents have changed, to mark documents that have not changed (visited flag) and to determine documents that are indexed but no longer exist in the data source. The Delta Indexing Manager was moved inside the Connectivity Manager for these reasons:

Despite of being a part of the Connectivity Manager, the implementation of Delta Indexing Manager is still replaceable to provide different stores for the delta indexing information (e.g. database or even a search index).

Here is a list of the information that needs to be stored by the Delta Indexing Manager:

The following data types are used in the Interfaces:

The Sub-Component Processor has no interface itself, but it implements the Connectivity Manager Interface.

An alternative to optimize network overhead is to provide methods supporting Lists of objects.

It makes especially sense for checkUpdate() and delete(), as the parameters of those methods do not contain much data. The size of the DataObject used in add() and update() varies greatly. For smaller objects it makes sense to provide Lists, for larger objects not. Of course the maximum List size should be configurable but who decides what List size to use (1 vs. N)? This has to be done dynamically to avoid memory errors\! Another problem is that the Iterator concept used in Crawlers does not fit to methods with Lists. Therefore the iteration over DeltaIndexInfo must be seperated from getting the DataObjects. For some Crawlers/DataSources it may be difficult or even impossible to support direct access on objects outside of an iteration. All of this complicates the logic\!

{note:title=2nd Alternative Interface } On page ConnectivityMessageInterface you will find another alternative for the Connectivity Managers interface based on messages.{note}

{info:title=Conclusion} During the team meeting on April 15 we agreed to implement the "1st alternative interface", employing lists to reduce communication overhead. In addition, the Crawler interface will also support lists. A Message-like interface or a pure XML interface may be adde later on. {info}

Here follows a description of the workflow when used by an IRM: