The parameters are the interface constants of the component.

Its ports are its interfaces for the interaction with the other components. They can be either “Provided” or “Required” and are typed by a Service definition.

Activities have functions and ports. They structure a kind of internal behavior of the component. An activity gathers functions that may be executed:

Moreover, the code of the functions may be written in the model or outside, as separate files to be provided in conformity with the prototypes that will be generated by the code generation.

The following Palette is used to edit the selected component: 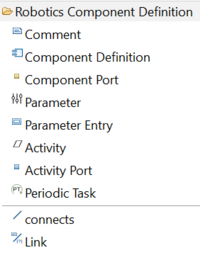 A parameter entry is part of a parameter block. If you create a new component definition using the wizard, the parameter block is already part of your component. A new parameter can be created in different ways

(1) Select the "Parameters Settings" tab in the Property view and add an element via the "+" button embedded into the table.

(2) Opening the textual editor for the component definition. This editor appears in a property view tab called "Textual Spec." when the component is selected.

An overview of the properties along with their type and description is available, if either the component itself or the parameter block is selected.

A port can be created via the "Component Port" tool from the palette. It must be placed on the border of the component. When a new port is created, the tool will first ask whether this is a “Provided” or “Required” port. Afterwards, the user has to select an existing service definition, either from a model already loaded into the resource set (since already referenced by another element of your model), a registered model or a model in the workspace.

Activities can be created from the palette. Activities have functions that are handling requests arriving at a component port (being called) or actively sending messages or requests (calling) to a port.

Functions can be created via the property view of activities, via the "+" icon in the dialog shown below.

List of functions, option to create or edit a function

Please note that if you edit a function, the pop-dialog will initially present the ID tab used to edit its name, you need to navigate explicitly to the function tab. The association of a function with an activity port can be expressed by means of an activity port reference. visible in the upper right corner of the function edit dialog, see below.

A function can optionally contain C or C++ code. If present (the property "code in model" is calculated automatically), the code will be embedded into the generated code by the code generator, for instance for ROS2. As the editor in the popup dialog is a text editor without programming language specific support (such as syntax checking or completion), it is recommended to embed to small code fragments into the model. If the code is present on the model level, generated code (placed into the src-gen folder) contains a full implementation.

If the code is not part of the model, the code generator will create an implementation skeleton (in a folder called src-skel). This skeleton file is overwritten in each code generation step. Therefore, the developer should create a copy of the skeleton file in the "src" folder (while preserving relative paths, e.g. a src-skel/folderA/fileA.cpp should be copied to src/folderA/fileA.cpp). The copied file can then be completed with a C++ editor such as Eclipse CDT in order to profit from syntax checking and code completion.

If the user provides a code fragment on the model level, the parameters are not visible directly in the dialog. But they can be checked out by opening the generated files in the src-gen folder. This issue is not present, if the code is completed later in the complete C++ file in the src folder (copied from the skeletons, as written in the previous paragraph).

When the user creates the link between a component port and an activity port, the tool will automatically create a handler function (with correctly setup activity port), if there is no function yet that is associated with the activity port.

In addition to parameters, components can be enriched with additional properties that enable further analysis. All of these can be provided in tables that are available in the property view, when a component definition is selected.

This page was last modified 07:33, 17 September 2020 by Ansgar Radermacher. Based on work by Christophe Aussagues.