Henshin's variant management feature allows to express variants of the same rule in a compact way, by making the commonalities and differences (variabilities) between the variants explicit. The key idea is to annotate rule elements (such as nodes and edges) with presence conditions over a set of features in which the variants differ. A presence condition specifies a condition under which an element is present.

Presence conditions are propositional formulas, based on the connectives & | ! (e.g., (A & B) | (C & !D)). We also support the xor connective in a prefix notation (e.g, xor(A,B,C)). Since it's cumbersome to edit presence conditions by hand, we provide dedicated editing support to reduce that effort.

We also provide an extension of the interpreter that can deal with such annotated rules, either by removing the variability before one variant is applied, or by considering all variants at the same time (executing them in batch mode).

This example is available as an Eclipse project with rules, an example model, and execution code: refactoring-variants-example

Consider a family of three refactoring rules for refactoring a class diagram. The rules, shown below, express variants of the move method refactoring for class models. The first rule specifies the relocation of a method between two classes. The second one additionally creates a "wrapper" method of the same name in the source class. The third one adds an annotation to mark the wrapper method as deprecated. 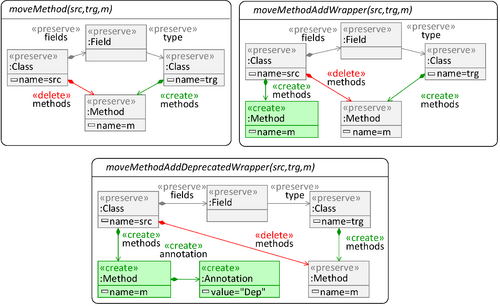 These three rule variants can be expressed using one rule with variability, shown below. Several elements are annotated with presence conditions over the features wrapper and deprecate. The variants are obtained by configuring the rule, i.e., binding the features to true or false and removing elements whose presence condition evaluates to false. Configuration {wrapper=false; deprecate=false} yields the base rule, a rule isomorphic to rule moveMethod in the Figure above. The rules induced by the configurations {wrapper=true; deprecate=false} and {wrapper=true; deprecate=true} produce the additional variants. To avoid the illegal configuration {wrapper=false; deprecate=true}, the rule has a configuration constraint, shown in the title bar, requiring wrapper to be true if deprecate is true.

A user interface supporting the management of rules with variability is integrated with Henshin's graphical editor. The main components of this user interface, a graphical editor and its attached properties view, are shown in the left of the image below. As custom components, we provide the variability and sanitizing views, shown in the right. The variability view comprises features for the definition and configuration of variability points. The variant produced from the current configuration is displayed in the editor. The sanitizing view can be used to sanitize legacy transformations. Both views are opened from the Windows -> Show View -> Other... menu in Eclipse.

The variability view allows features in a rule to be created and deleted. To view and edit variants individually, the user configures the rule by setting the bindings for these features. Three literals are supported: true, false, and unbound. Per default, each variability point is unbound, yielding the maximal rule, all elements regardless of their annotations. Configurations are validated against the given variability model, deprecate -> wrapper in this case. Invalid configurations and rules lead to error messages being displayed.

To navigate variants efficiently, frequently used configurations can be saved as favorites using the

button in the toolbar. The star appears in yellow if a favored configuration is currently active. Each configuration has a user-specified name. In the figure to the right the user has created two favorites, WrapperWithDeprecate and WrapperWithoutDeprecate, the latter one being active. Upon selection, the configuration is loaded and shown in the table at the bottom of the view.

A view mode feature allows to access distinguished variants rapidly. In the maximum rule mode, represented by the

icon, all elements included in the rule are shown regardless of the configuration. In the variant mode (

), elements absent in the current configuration are concealed. In the base rule mode (

), elements with a non-empty presence condition are concealed.

To further improve the handling of variability, the view allows the users to choose a concealing strategy, depicted in the figure below. First, elements can be turned invisible. This avoids a cluttered representation of the rule and lets users focus on the variant at hand. On the other hand, to allow the comparison of a variant with the full rule, users may choose to have the elements toned down instead.

button, users can select an editing mode to define which variants are affected by edits to the rule. The supported options are: all variants, variants included in the selected configuration, or variants associated to the current view mode. In particular, the editing mode determines which presence condition is assigned during the addition or deletion of elements to a rule.

Context menus: Additional context menu entries allow to manage variability at the level of individual elements. Multiple nodes, edges and attributes can be selected and simultaneously "moved to a different configuration" (that is, have their presence conditions changed to match the current configuration).

Applying a rule with variability is supported via an extension of the interpreter engine. A minimal self-contained usage example is available from the example project. Loading the relevant resources and setting up the components of the transformation (EGraph, Engine etc.) etc. works the same as for standard rules (see the Interpreter API description).

In this snippet, the user configures the rule to activate the wrapper and deprecated features, which produces a rule variant identical to moveMethodAddDeprecatedWrapper in the first figure. This rule variant is applied to the input model.

It's allowed to provide a partial configuration, which does not include a value for each feature, and to provide null as the input configuration. In this case, if multiple variants are applicable, an applicable one will be non-deterministically applied. This behavior is particularly useful for batch transformations, where all rules of a module are applied as long as one is applicable (see Strüber et al.'s paper at FASE 2015).