EMF Diff/Merge is a tool for merging models. More precisely, it is a technical component that can compare and merge sets of model elements. It consists in a diff/merge engine that is designed to prevent data loss and enforce model consistency during merge thanks to consistency rules. The project also provides GUI components and a set of applications.

The EMF Diff/Merge project is part of EMF

Merging models is a common need in model-based activities, not only for version control of models but for model manipulation in general. However, it is a much more complex operation than merging source code. This is because models, in the EMF sense, are rich data structures constrained by a metamodel and sometimes subject to implicit engineering rules. Have you ever merged models in the past and obtained incorrect, unexpected or inconsistent results? This is what EMF Diff/Merge seeks to prevent. 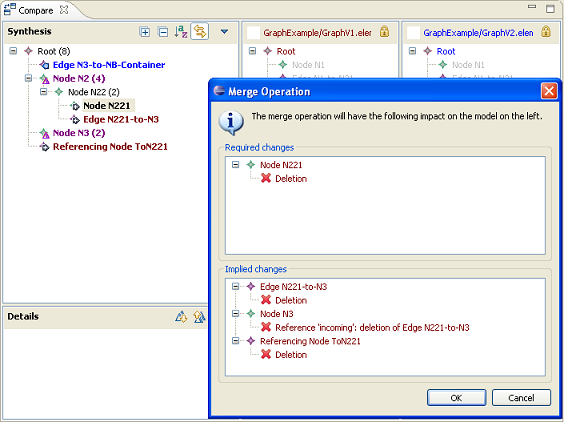 The scope of EMF Diff/Merge covers:

Among others, the tool exhibits the following characteristics:

Principle of the solution

The usage process is illustrated by the figure below. First, a comparison is created based on the models to compare. The differences between those models are computed according to given policies. Then, as long as differences remain, any subset of these differences can be selected for merging. Every time, predefined consistency rules and user-defined policies are used to compute the minimal superset of differences that must be merged to preserve consistency. The user may decide whether to confirm or cancel the merge of the whole set of differences. 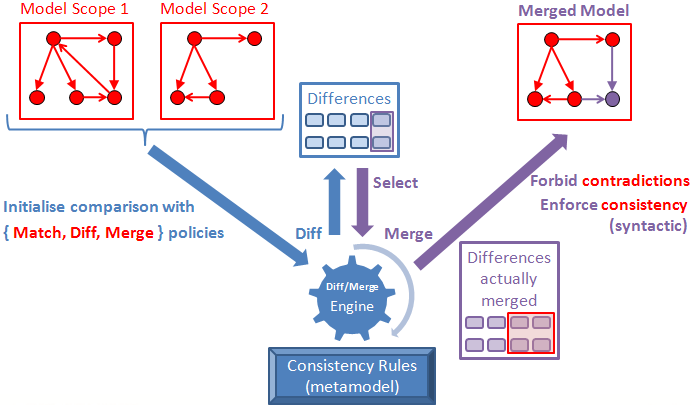 For a description on how the objectives and the level of abstraction differ from EMF Compare, see the project proposal.

This page was last modified 08:23, 7 March 2021 by Olivier Constant. Based on work by Philippe DUL and Abel Hegedus.