The terminologies/acronyms below are commonly used throughout this document. The list below defines each term regarding how it is used in this document:

According to the CMDBf specification, an MDR requires the implementation of the following services to be fully integrated with a federating CMDB:

During the i6 time-frame a query service will be implemented for the SML repository. The service will allow clients to query the available data with the XML query language described in the CMDBf specification. The output of the query will also be in XML format, which the client is expected to understand.

Currently clients are expected to interact with the SML repository via a set of convenience APIs. This enhancement does not imply the removal of such APIs. They may need to slightly be modified to accompany the new changes but they can still be reused by clients who have no intentions of leveraging the new query service. Since the current consumers of the SML repository convenience APIs don't exploit the full range of query capabilities afforded by the query service, a programming interface will also be available to allow queries to be submitted using the XML schema described in the CMDBf standard.

There will likely be common set of code between the COSMOS client and the SML repository. It's expected that this common set will reside under the data collection subproject. One of the primary objectives of this document is to identify this reusable set of common code.

This section lists the requirements of this enhancement:

For the following use cases, the SML repository acting as an MDR will contain the data described in the org.eclipse.cosmos.rm.example.datacenter COSMOS plug-in:

Use Case 2: Retrieve All Computers With At Least 2000 MB RAM

Use Case 3: Retrieve All Server Software

Use Case 5: Retrieve All Non-database Software on Linux Machines

The following section details out the implementation of the CMDBf query service for the SML repository. As mentioned before, the SML repository has defined a set of convenience APIs that it is currently leveraged by clients. The implementation of this enhancement will need to understand queries based on the CMDBf specification and make use of the convenience APIs to fetch the required data.

Using the instanceIdSelector under the itemTemplate is equivalent to fetching documents with an org.eclipse.cosmos.rm.repository.provisional.resource.ISMLMetadata that has a specific ID. The property, xpath, and the record type selectors will all be supported under the itemTemplate element. Clients will also be able to use the propertySubsetDirective to return a set of desired properties, instead of full records.

The only valid relationship between items stored in an SML repository is the 'references' relationship. Item i1 references i2 if and only if there exists an inter-document reference of i2 in the SML document representation of i1. All relationshipTemplate elements should include a record type selector with:

No other selectors should be used in conjunction with this relationship.

The list below summarizes the scope of this enhancement:

The flow diagram below depicts how the query service will process an input. The service will apply the selectors in the following order:

The instance and record type selectors are faster and effective mechanisms of narrowing the result set for a query, whereas the property and xpath selectors are more processor intensive operations that are applied in the end. 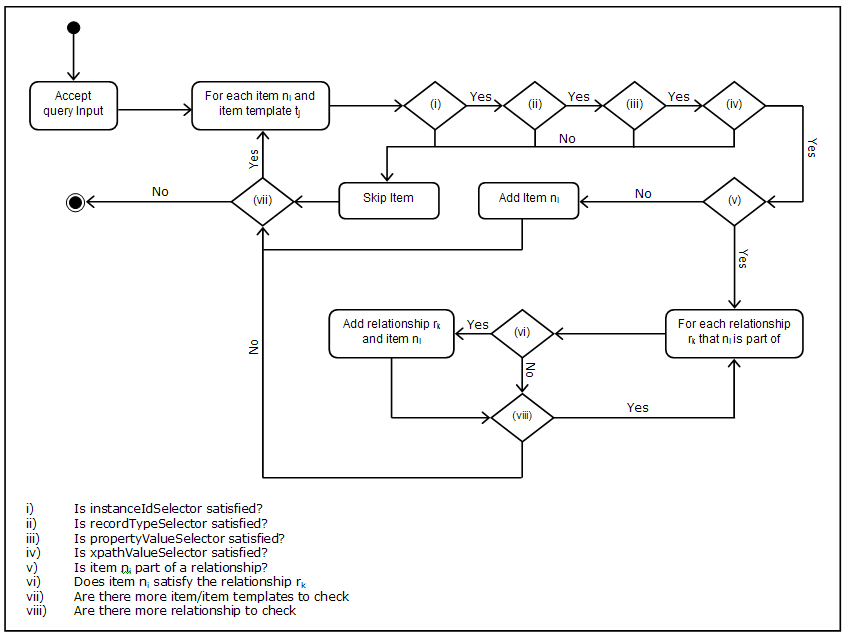 The CMDBf query service will be implemented as an operation of the SML repository. Similar to the validation, import, and export operations, a client will first need to establish a connection to the repository to obtain the CMDBf query operation. The operation will take an input stream as argument and will produce an input stream as output. The argument is expected to be set to the XML query and the output will be the query response.

There will be a reusable component under the data collection subproject that will need to transform an XML query into a graph that is understandable by the query service. There also needs to be a common component to convert a graph representing a query response into an XML document that conforms to the CMDBf standard. The image below depicts the interaction between the query service provider, the SML repository, and the query service. The input and output transformers are reusable components that will reside under the data collection subproject. There needs to be a mirror operation provided for the output transformation to convert an XML query response into a graph representation. This is useful for clients that intend to traverse through a POJO representation of the response.

The diagram above does not include the sequence of steps needed for a client to access a query service end point. It only depicts the layer that will reside behind a WSDM end point that the COSMOS client will remotely access. The end-to-end interaction between the client and the query service should be described in the design of: https://bugs.eclipse.org/bugs/show_bug.cgi?id=200244. There needs to be a systematic method defined for a client to access the query service of MDRs.

Unit tests will need to perform the following tests:

The following section includes the tasks required to complete this enhancement along with a PERT chart that displays the dependencies of each task.

All reviewer feedback should go in the Talk page for 200222.

Issues (and potential errors) regarding the CMDBf spec, v0.95. Email responses from a member of the CMDBf expert group are marked in red.

This page was last modified 12:26, 13 December 2007 by Sheldon Lee-Loy. Based on work by David Whiteman and Valentina Popescu and Eclipsepedia user Amehrega.ca.ibm.com.