This page tracks information related to how code, configuration, build artifacts, bundles, packages, and more are distributed at Eclipse.

The LTS and Polarsys industry working groups provide a catalyst for new requirements.

NOTE: this page was originally not discussing run time install and dependency handling. In reality many of the same challenges need to be solved.

The following is an image depicting repositories of software at Eclipse, processes that consume and produce output, and the flows between processes. 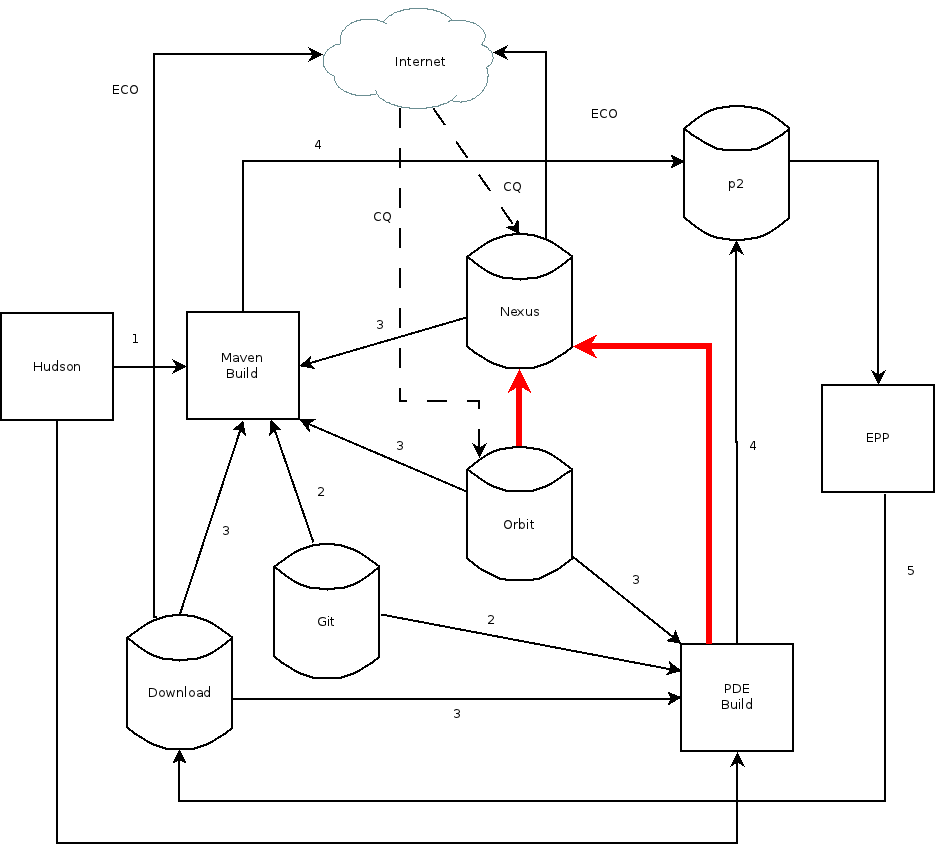 2 - Code and config is cloned from git

Apologies for not representing all build technologies on this diagram. We recognize there are others. This was to serve as a useful framework for discussion rather than a complete inventory.

ECO - Eclipse technology is consumed by the ecosystem at large

Red arrows denote a path that would be useful, but may not exist today

What about Eclipse technology? At the moment, projects consuming technology from other Eclipse projects do so in a variety of adhoc ways. People picking up Eclipse technology are left to discover the chain of transitive dependencies - both Eclipse based and third party. This is a brittle process and assumes a lot in terms of developers doing the right thing, even when it isn't always clear what the right thing is.

This is an issue for Eclipse projects hosted in the Foundation forge, and also for technology outside using Eclipse components.

Move to other forges

The LTS and Polarsys programs must ensure that all dependencies are available from an Eclipse Foundation controlled source decades into the future. This includes all 3 types of software as listed above. As well, the LTS forge is for members only. Binaries for software involved with LTS must only be available to members both for consumption in a build and runtime.

Thus, for a given developer from a specific company working on LTS software, their preference will be this order:

This concern has a multiplier effect since there are multiple forges, a much large number of releases active, and a number of people & companies involved with each release.