This page summarises information about occupation mechanisms of Control Components.

Description of the Problem

Several processes should run in parallel and adapt dynamically and individually to the external situation. For this, however, it is necessary to solve the handover problem. Processes must not hinder each other or trigger dangerous situations. Furthermore, there shall be no central control. The control units should be able to solve their problems themselves.

Each process can occupy a control unit before and after critical situations. This means that only one process is active in each section. Processes can therefore not hinder each other. An advantage would be the good overview. However, this is at the expense of a dynamic process flow.

To illustrate, let's imagine a roller conveyor again. Several pallets of aluminum coils are transported on the roller tables and then lift by a coil cart. The coil cart then transports the coil to a coating station, afterwards the coil is cut in another station. The two stations pose a variety of risks. Theoretically, coating and trimming could be performed in parallel, by different coils and different coil carts. To minimize confusion and ensure the necessary safety (deadlock etc.), overbooking can now be used. The first coil that enters the station blocks the entrance. This is done in the knowledge that the stations are a bottleneck and thus dangers and possible problems are avoided by only one coil passing through them at a time. The group control units can now release their single control units in this protected area and then reassign them without other processes interfering. The single control unit, which acts as "entrance" to such bottle necks (here e.g. the single control unit for the roller table in front of the stations) must be occupied at the beginning by the first group control unit and is released at the end by the last group control unit of this procedure. In order for the group control units to still function in other plants and under other conditions without major changes, input ports could be created. The start and end control units can now be entered here dynamically. Nothing happens with an empty value. Otherwise these control units are occupied at the beginning and left free later. With this method, safety takes precedence over dynamic behavior. 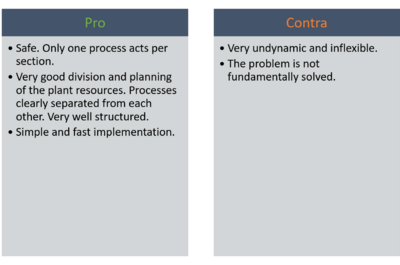 This consideration leads us to the following points: 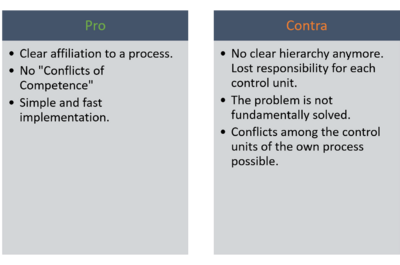 Each object receives its own control unit (pallet, sleeve, coil, ...). The control units have different processes with which they are controlled. Accordingly, they move themselves from control unit to control unit. This has the advantage that objects are always assigned to a control unit and therefore cannot run into each other. In addition, it can lead to a very dynamic behavior. However, the effort is enormous. For each object, control units must be created and possibly also deleted again. 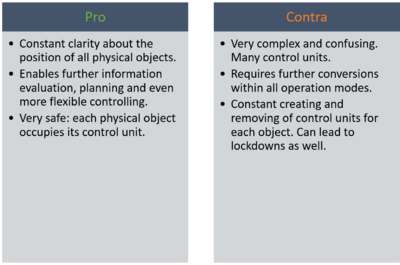 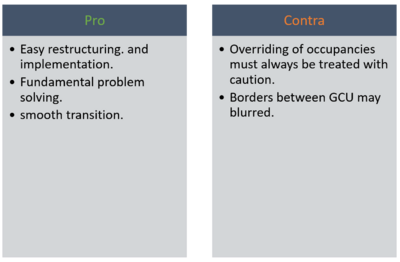 Possible Take Over Implementation with the Help of Camunda

The example of the command "Overtake=NewGCU,SCUA(PortA),SCUB(PortB),...;" is used to explain the current implementation. The execution of this command was programmed in Java and can be used within the process sequence by a task in Camunda.

The command then process as follows:

Then it is checked whether the new group control unit (here "CX") is free and the previous one is occupied by the correct operator. If not the command will be aborted as well.

3. Takover of the single conrol units

The single control units are not taken over directly by the new group control unit, but it appears so from the outside.

Subsequently, all control units involved must be checked. This results in whether the test was successful or not.

Possible Take Over Implementation on the control unit layer