Facets ordered in different facet categories may describe a huge variety of control component realizations. Consequently, profiles are needed to reduce the amount of facet combinations to a usefull subset. Examples of control component dummies in OPC UA can be found in the [ccProfilesUA project].

Every profile will refer to at least one facet from every facet category and will therefore be considered as full featured profile. Hence, applications can be developed and implemented against single facet values or whole profiles. The following profiles are currently defined and may be extended in the future:

The following table defines the described profiles by referencing according facet values. As different standards like PackML allow for variations themselves (e.g. availability of SEMIAUTO execution mode), only minimal requirements are set.

The default profile for BaSys control components has an OPERATIONS service interface, conform to VAB Implementation. It has a simple occupation state machine with one priorytized state (OCCUPIED, PRIO) and no local overwrite. Moreover, at least the MANUAL and AUTO execution mode must be available. As execution state machine a subset of PackML and ISA88 exuction states are selected. Multiple operation modes may be available, but only one operation mode is active at a time and needs to be selected beforehand.

Compliance tests need to be defined in order to verify that a control component conforms to a profile or specific facets. These tests can be static, checking the interface according to the interface specifications in the SI Facets. Moreover, behavioural tests can be defined based on the standardized state machines. These test may be even be used to explore the profile of an unknown control component, which could be used in a plug and produce procedure for example.

An implementation and description for test cases and example dummies in OPC UA utilizing the Google-Test framework can be found [ccProfilesUA project].

The following table shows an overview of all facet values. The left (blue) part are combineable values realized as bitmasks, the right (green) part are alternative single values. 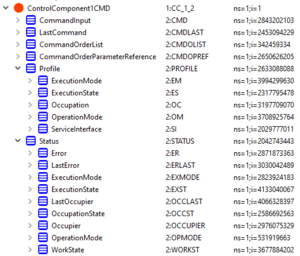 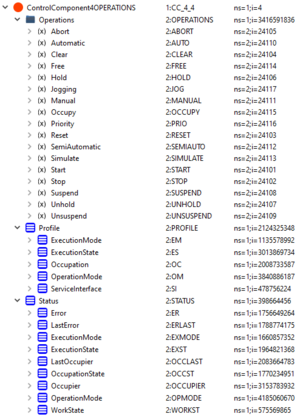 The execution mode facet category describes which execution modes are available. A component is assumed to be in AUTO like mode at all time, if the EM value is NONE. An EM value of two or higher (ANY) requires a EXMODE variable to determine the current mode.

Even though the state machines differ in their number of states, their names can be mapped to each other, as shown in the following table. The MTP column also shows corresponing bit numbers.