Getting started with a PDE build can be daunting. Athena aims to make that simpler by streamlining the setup process by setting & creating logical defaults, but you can always extend and override.

To get started with Athena, you can read the following:

Order of listed items below should not be taken as priority sequence. For prioritization, see Project Plan (Draft), or the following bugzilla queries: 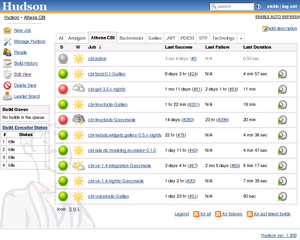 In order of currency:

We're always looking for people to contribute. You can drop us a line at dash-dev@eclipse.org.

You can also subscribe to the Dash Commonbuilder Bugzilla inbox, find an open bug to work on (we love patches!), or open a new bug.

This page was last modified 13:06, 23 March 2010 by Nick Boldt. Based on work by Nick Boldt, Gunnar Wagenknecht and Nick Boldt and others.