The Web Services Definition Language (WSDL) 1.1[1] has been used world-wide for the definition of Web Services ensuring well-defined, system-independent and interoperable contracts for reliable communication among different structures and organizations thus being the foundation of many industry specific solutions in the area of Service Oriented Architecture (SOA) and Business Process Management (BPM). The primary type-system, utilized for definition of data types within a WS interface as part of an operation signature, has been the XML Schema Definition (XSD) [2][3]. As such the XML-based WSDL 1.1 and XSD artifacts are integral to the development of scalable business (A2C, B2B, etc.) solutions in distributed environment. In addition the XSD has become a prominent way to describe and validate XML documents in many use-cases, which are outside the scope of the Web Service provisioning one, e.g. data-base schema description, arbitrary XML documents validation, etc.


Yet the complexity of the aforementioned XML dialects imply considerable difficulties and a steep learning curve when it comes to the definition / modification of WSDL 1.1 and XSD models. The currently existing tooling in the Eclipse WTP project, although full-featured in terms of specification-support, does not do much to hide this complexity and has been considered to be too technology-centric by the average SOA developer. In addition it seems to be distributed in several editors and views, which to some extent makes the navigation a bit harder.


The feedback of a number of end-users, experienced in the development and maintenance of SOA/BPM-based applications, points out that they need a compact UI modeling toolset, which only gives them access to the selected set of the most commonly used entities, defined in the WSDL and XSD specifications, and makes it easier for them to quickly create and modify Web Service contracts and XSD artifacts. As part of it the early error detection and resolution as well as the rich refactoring capabilities seem to play a quite important role in the development process.


The Service Interface and Data Types editors are Eclipse form-based editors, which fully satisfy these requirements, providing easy-to-use, unified user interface and facilitating developers with quick and efficient application development in all WS and XSD related areas. In order not to restrict WSDL and XSD experts to the visual-editing capabilities of the tooling they also provide feature rich text-editing capabilities based on the WTP Structured Text Editor.

The strategic goals of the editors are reflected by the high-level definition of their scope as defined below.

A standalone, multi-page, form-based Eclipse editor for modification of WSDL 1.1 documents, which gives UI modeling access to selected features of WSDL 1.1 aiming to provide exceptional ease-of-use and to boost developers' productivity. It opens files with *.wsdl extension contained in the Eclipse workspace. 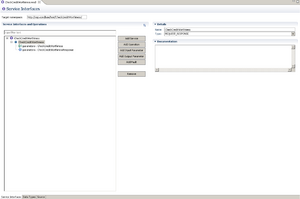 A WSDL 1.1 PortType being modeled with the Service Interface Editor 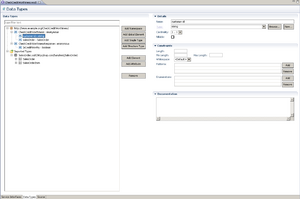 A standalone, multi-page, form-based Eclipse editor for modification of XSD documents, which gives UI modeling access to selected XSD entities aiming to provide exceptional ease-of-use and to boost developers' productivity. It is also embedded in the Service Interface editor and is utilized for UI modeling manipulations of the in-line XSD schemas, contained in a WSDL document. It opens files with *.xsd extension in the Eclipse workspace. 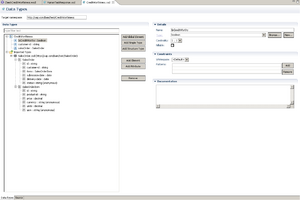 A XSD document being modified in the Data Types editor 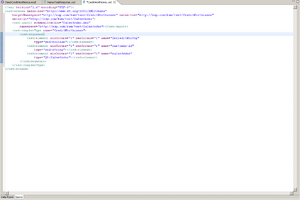 The XSD source editing of an XSD artifact

The editors are to be used whenever the development productivity needs to be high and the modeling experience is not required to support all WSDL 1.1 and XSD entities, i.e. when the use-case would be similar to the Web Service interoperability, SOA and BPM ones.

Note: There are no proprietary/non-Eclipse dependencies.

The initial code contribution will come from SAP where the Service Interface & Data Types Editors have been originally developed. They will provide the functionality described in the Description section.
The developed plugins can be found as attachements in the following bugzilla: https://bugs.eclipse.org/bugs/show_bug.cgi?id=323696

The following individuals are going to be proposed as initial committers to the project:

This page was last modified 07:29, 26 August 2010 by Dimitar Tenev. Based on work by Kaloyan Raev and Emil Simeonov.