Use standard licenses in features

Added option to Migrate License Support for Indigo or other releases based on 3.7 PDE Build (see bug 306818)

This tool is a very simple aide to make license properties and files consistent in features[1]. In short, in addition to the Eclipse legal requirements of having the right SUAs, licenses, etc., beginning with the Helios release requirements, we want them to also be perfectly equivalent (same text, same case, same dates, etc.), when in fact they are the same. This is done to improve ease-of-use of the Installation UI and make the license acceptance more meaningful, since all features which have the same license can be grouped so users would have fewer of them to read.

This simple tool works on (only) workspace files. It finds all projects that are features, by looking for those that contain a "feature.xml" file. Then it looks for a "feature.properties" file. If found, it checks for a "license" property in that file, and compares its value with the value of the standard version. If different, it will update the feature.properties file with the new, consistent license text. It leaves other parts of the file untouched (such as, it leaves in existing comments and white space, and just replaces the license part.

If the tools finds it needs to update the 'license' property, then it will blindly add or replace an existing license.html file with the one that has the standard HTML content.

This tools was created to aide one specific case (Web Tools Platform), and is very much "unsupported", "use at your risk" sort of tool. That said ... it is hoped to be useful to others, so it is documented (here) and is available to all from the webtools releng repository.

To use the tool, first install it [2] and restart the Eclipse IDE. Then you'll see a new item on the menu bar, Releng with two sub-items: Rewrite Licenses and Migrate License Support.

To simply rewrite license files and properties, click Releng (on menu bar) and then click Rewrite Licenses. At that point, it does its work, modifying some if they are found inconsistent, but not others if already consistent, and it writes a log of what it finds and modifies in the workbench's console.

Before committing and releasing any modified files, be sure to compare and look closely the changes made, and made sure they are what is expected, and didn't mangle anything. That is, use at your own risk ... the ultimate responsibility is still yours, the tool is meant as only an aide utility, not necessarily a complete work-in-all-cases tool, since it should be needed to be used very seldom).

For Indigo, an additional menu command was added to aide in moving to the new type of license support, offered by PDE build. For Indigo, changes to builder was made to allow each feature to reference the license information indirectly, then it is retrieved and inserted in the right places at build time. See Kim Moir's excellent blog on the topic: Implementing shared licenses with 3.7M5.

This command makes the changes to feature projects that Kim outlines in her blog:

One change that is needed, but that is not made by the tool, is to add a line to one of the map files, that describes where to get the standard license feature and exactly which version of it to get. Take the following as an example only, but my guess is it will be common practice to use the same license-feature used by the Eclipse Platform project:

The advantages of using this new form of indirect license-by-reference support, is that in the future, very few, if any, changes would be needed to pick up the new license during a rebuild. Note that you need to use PDE Build from 37M5 or greater to use this function correctly. Some reasons to not use this type of support (and use Rewrite Licenses instead) is if your build system does not use PDE's feature build (I've heard they all do, at their cores) or, if for some reason, you can not move to an 37M5 based builder. 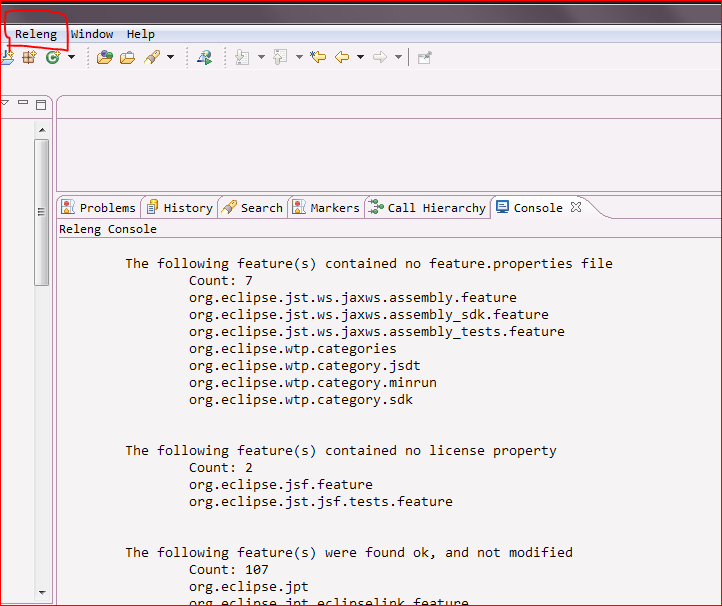 The following image shows a normal case, where the values are on a line by themselves, so are removed as intended.

The following image shows a case where 'license.html' is not modified, since on same line as "includes". Note also, the simple heuristic can leave a dangling continuation character at the end; This is valid from a Java Properties file syntax point of view, but usually not written that way by people.