Virgo is based on OSGi a java modular system created in 1999 by the OSGi Alliance. Virgo uses Eclipse Equinox which implements the OSGi core framework specification. Virgo also depends on some non-standard features of Equinox and so does not run on other OSGi framework implementations.

OSGi is a component model with dynamic life-cycle. You can compare OSGi modules with UPnP. That mean you can extend/remove features while the VM is still running. Unlike deploying a war, for example, that needs a restart of the VM to add new features, OSGi allows you to just hot deploy new modules or update existing modules.

If you wish to learn more about OSGi, the following books are recommended:

Virgo supports the deployment of various types of artifact. Standard artifact types are:

In addition, it is possible to add user-defined artifact types.

The Virgo kernel is the core runtime which may be used on its own or to deploy one or more server types and applications for those server types. The kernel houses the deployment pipeline, described below, as well as support for common artifact types (bundle, configuration, plan, and PAR), regions, scoping, and other core Virgo features.

The startup scripts launch the Equinox launcher which then installs, and optionally starts, each of a configurable collection of bundles to provide kernel function. See the User Guide for details of how to configure the kernel.

The kernel uses the Equinox region support to isolate the kernel from application artifacts, including artifacts which implement servers. A region is a subset of the bundles in the OSGi framework which have controlled sharing with other regions. As shown in the figure below, the kernel starts in a normal OSGi framework, known as the kernel region, and then creates a region known as the user region. 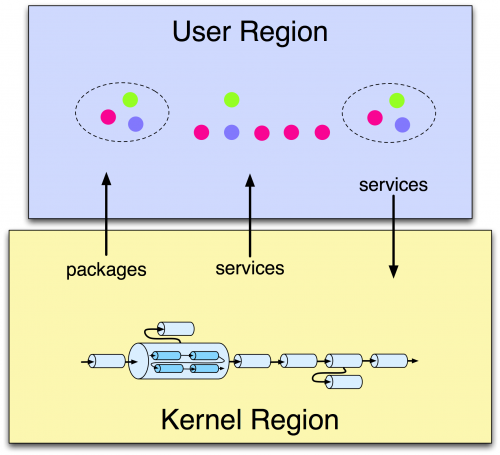 Region support was added to enable applications to run with a different version of Spring than that used by the kernel. A minimal set of Spring bundles is installed into the kernel region with very few optional dependencies which keeps the kernel footprint and startup time low. In principle, Spring could be entirely removed from the kernel region if the kernel was modified not to depend on Spring (most of these dependencies are because the kernel uses Spring DM to publish and find kernel services).

So, apart from the basic principle that no packages are exported from the user region to the kernel region, there is a lot of flexibility for changing the contents of both kernel and user regions and for specifying which packages and services are shared between the regions.

In future, Virgo could be extended to support multiple user regions in order to isolate applications from each other.

Virgo adds the concept of scoping to OSGi. The main use case for scoping is where a group of bundles form an application which needs to avoid clashing with other applications and which needs reliable behaviour when it calls third party bundles which use thread context class loading. Clashes can occur because of bundles, packages, or services conflicting in some way.

Virgo also uses the standard OSGi service registry hooks to limit the visibility of services published by bundles in a scope.

However, a bundle in a scope may access bundles, packages, and services not provided in the scope but which are available outside the scope, that is from unscoped bundles. So a scope acts similarly to a programming language scope such as Java's curly braces: 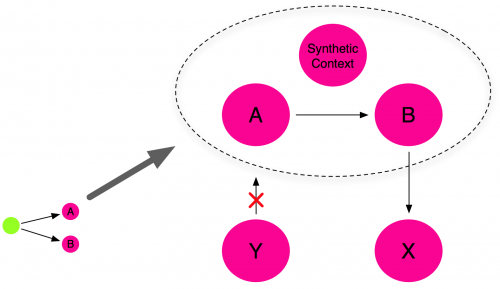 Artifacts are deployed into Virgo using a deployment pipeline consisting of several pipeline stages some of which have pipelines nested inside them as shown in the figure below. 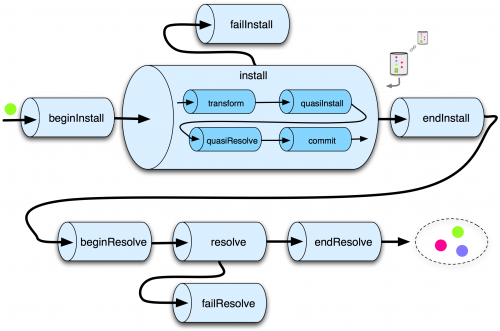 The pipeline, and each pipeline stage, accepts a tree of install artifacts as input and outputs a possibly modified tree. The deployment pipeline is constructed by the Plumber class.

There are two approaches to handling exceptions thrown by a pipeline stage. In general, unexpected exceptions are allowed to percolate upward and result in diagnostics and a failed deployment. However, certain expected exceptions, such as failure to resolve the dependencies of the install artifact tree, need to be handled more gracefully. In these cases, a compensating pipeline stage is defined which drives a compensation stage if an exception is thrown. failInstall and failResolve in the figure above are examples of compensation stages.

Virgo repositories contain artifact URLs and metadata and are indexed by the Cartesian product of artifact type, name, and version. There are three kinds of repository: external, watched, and remote. Repositories are passive in the sense that changes to repository content do not cause artifacts to be deployed into Virgo, refreshed, or undeployed. Repositories support queries which allow sets of artifacts satisfying certain criteria, for example with a version in a given version range, to be determined.

The Virgo kernel's default repository configuration specifies a watched repository based on the contents of the repository/usr directory.

A remote repository refers to a repository hosted by a Virgo instance sometimes known as a repository server. The hosted repository is configured using the file config/org.eclipse.virgo.apps.repository.properties and may be either an external or a watched repository.

This page was last modified 09:09, 15 April 2013 by Glyn Normington. Based on work by Mastah Naleh, Hendy Irawan and Steve Powell.