Hudson can be used to perform the typical build server work, such as doing continuous/official/nightly builds, run tests, or perform some repetitive batch tasks. This is called "free-style software project" in Hudson.

Setting up the project

For more details, click the (?) icons in the configuration page.

There is sometimes a need to build a project simply for demonstration purposes or access to a SVN/CVS repository is unavailable. By choosing to configure the project  as "None" under "Source Code Management" you will have to:

If you are executing a Windows Batch Command, the variables should be referenced using the %VARIABLE_NAME% pattern. For example:

If you're using an Ant script to do your build, you may include environment variables in property settings. Click on the *{_}Advanced..._* button just below where you put the Ant targets you want to build. This will display the _Properties_ box. Below is an example how to use the Properties box to set Ant properties with Hudson Environment variables: 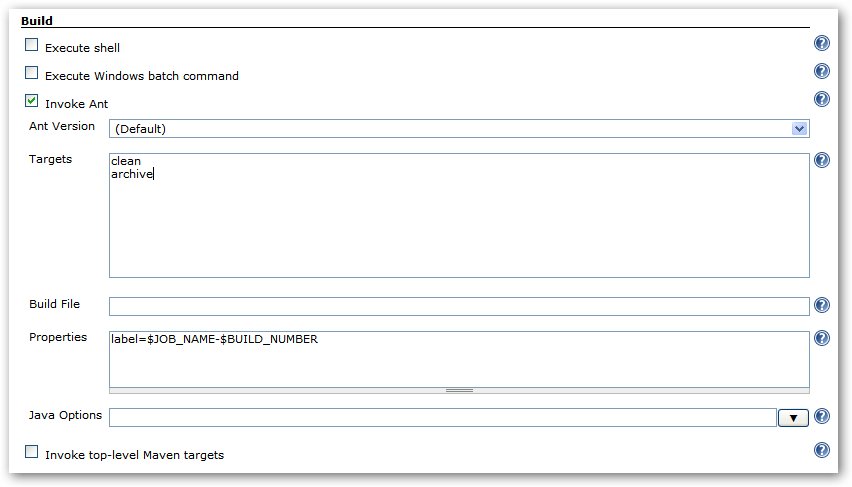 As an alternative, you can use the Environmental prefix to pull in all environmental variables as properties right inside your Template:Build.xml file.

Below is an example how to set the property "label" to include the Project Name and the Build Number:

Builds in Hudson can be triggered periodically (on a schedule, specified in configuration), or when source changes in the project have been detected, or they can be automatically triggered by requesting the URL:

This allows you to hook Hudson builds into a variety of setups. For more information (in particular doing this with security enabled), see Remote access API.

Builds by changes in Git

To perform builds whenever someone pushes a change to a Git repository, use a post-receive hook to trigger a new build. The hook can use wget/curl to access the build URL shown above, or send email to trigger a build as described below, but these approaches are specific to a particular job. You could configure Hudson to poll your source control system periodically and start new builds when changes have been detected. But this has the disadvantage of causing overhead when there have been no changes, and responding slowly when there have been changes. The best approach is to trigger polling with the post-receive hook. Configure the job for polling but leave the schedule empty or specify a long period, e.g., @yearly. Then set up the post-receive hook in the Git repository server like this:

Replace HUDSON with your Hudson host name and REPOSITORY_URL with the Git repository URL used in your jobs. In Git, unlike Subversion, a single repository sometimes has multiple URLs to access it. In such a case, simply execute the curl commands multiple times with all the different URLs you actually use in jobs.

Any push to the repository will trigger the post-receive hook. When Hudson receives the notifyCommit, it will trigger polling for all jobs set up to poll the specified Git repository URL. In addition to starting builds in a timely manner, this prevents Hudson from running a build with no relevant changes, e.g., for commits affecting branches that are unrelated to the job.

Builds by changes in Subversion/CVS

To perform builds whenever someone makes a change in the repository, use a post-commit hook (hooks/post-commit for Subversion, CVSROOT/loginfo for CVS) to trigger a new build. The hook can use wget/curl to access the build URL shown above, or send email to trigger a build as described below. The trigger may use /polling instead of /build at the end of the URL to make Hudson poll the SCM for changes rather than building immediately. This prevents Hudson from running a build with no relevant changes for commits affecting modules or branches that are unrelated to the job. When using /polling, the job must be configured for polling, but the schedule can be empty. Or, you could configure Hudson to poll your source control system periodically and start new builds when the changes have been detected.

If you have the root account of your system and you are using sendmail, I found it the easiest to tweak /etc/aliases and add the following entry:

and then run newaliases command to let sendmail know of the change. Whenever someone sends an e-mail to "hudson-foo@yoursystem", this will trigger a new build. See [this|http://www.developer.com/open/article.php/615931] for more details about configuring sendmail.

With qmail, you can write Using Hudson/Building a software project/var/qmail/alias/.qmail-hudson as follows:

^1^ {anchor:1}Maven requires that you include the parameter as part of the build goals. \\ Example Hudson configuration for the Maven "Goals" field: clean install \-DBUILD_NUMBER=$\{BUILD_NUMBER\}

This page was last modified 16:11, 9 December 2014 by Bob Foster. Based on work by Scott Fisher and Winston Prakash.