Let a non-generated class be used for an EClass

For example say you have a model with two EClasses: Car and Owner and there is an EReference Car.owner which references the Owner EClass. Then if the Owner is represented by a custom java class: CustomOwner, Texo will make sure that the getter, setter and java member for Car.owner refers to the CustomOwner class.

To tell Texo to use the custom java class for an EClass, the following has to be done:

Texo fully supports the EMF feature map by generating a separate class for a feature map element. The feature map itself then becomes a List which contains the generated feature map entry class.

See this example model, the Library EClass has a feature map people. The people feature is a list of three different types: Writers, Employees, Borrowers. Java can't support a List/Set of different types (other than the very type-unsafe and unexpressive List<Object>). Texo solves this differently it creates a separate class for the element in the feature map list, in this example a LibraryPeopleFeatureGroup class is generated. This class has several utility methods and methods to set/get a writer, borrower or employees. 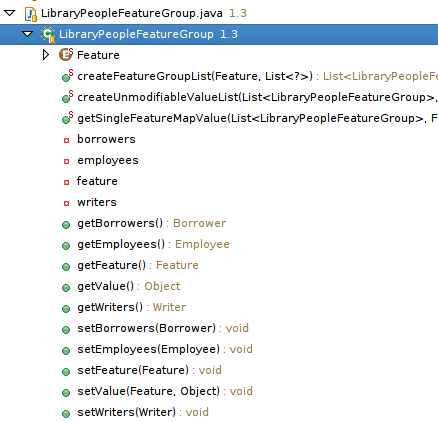 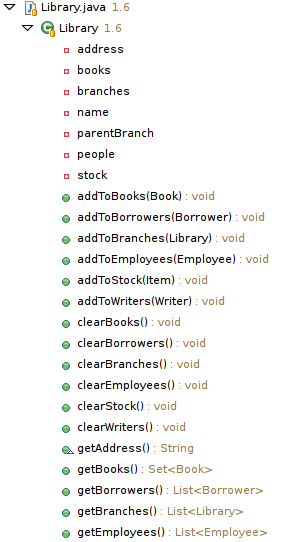 The advantage of creating a separate class to represent the feature map element is that it fairly straight forward to map this class to a database using an ORM or to other external tools while still maintaining an expressive api.

Generation of a safe bi-directional association API (or not)

For more information see the wiki document on the EPackage Model Gen annotation.

Texo can generate two types of api's for many EReferences (EReferences which can hold multiple values):

The first api is simple to use but in case of a bi-directional association a programmer has to explicitly set both sides of the association.

The second api is a bit more complex but Texo internally takes care of handling bi-directional associations. So the developer only needs to set one side of the association, Texo automatically sets the other side.

To tell Texo which type of api to create there is the 'Generate save many access' property on the EPackage Model Gen annotation. Set it to true to generate the more extensive (but safer) api, or to false to get the more simple api.

Texo makes it possible to choose between java.util.List or java.util.Set when generating code for an isMany EStructuralFeature. Texo uses two control parameters:

Only Generate Entities - No EMF dependencies

As a default Texo will generate 2 classes: ModelPackage and ModelFactory, which have dependencies on EMF. These two classes are needed for the following runtime functionality:

If this functionality is not important for your specific case and you want to prevent any compile time dependency on EMF you can direct Texo to not generate the 2 Model* classes. Do this by setting the 'Add model runtime behavior' property of the EPackage Model Gen annotation to false.

To use Texo with EMF dependencies in a standalone Java application, see:

As a default both types are placed in the same java package. If you don't want this, so you want to have a clean java package without any EMF dependencies then you can tell Texo to generate the Model* classes in a separate java package. You can do this by setting the 'Model Classes Package Path' of the EPackage Model Gen annotation to a different java package than the one used/generated by Texo.