These instructions were substantially changed in August of 2012, to accommodate migration to new source repository, and at the same time a rename of the main project needed from that repository. The instructions and process for Juno (SR1 and SR2) are very similar to those for Kepler (SR0, in June 2013) except for the branch to use to for modifications/updates; Juno_maintenance for the former, master for the latter. For history of migration and change of project names, see bug 359240.
These instructions were also updated when moving to Gerrit, as discussed in bug 422215. However, those change are backward-compatible so there are also relevant maintenance branches of the aggregator.

- Note: As far as is known, any EPP Package (or, plain SDK) should work, but, you will (naturally) also need EGit installed to work with *.b3aggrcon files -- so the Eclipse "Standard" EPP package it a good choice to start with.
- As you install from ".../b3/update-4.4", you will need to have "Luna repository" enabled and the "Contact all update sites ...", so the b3 aggregator feature can "pull in" the "EMF UI" bundles it needs, if you do not already have EMF UI installed,.

Edit the aggregation description and models

There are 2 different ways of pushing content to the simrel repository.

As a SimRel committer, push directly to the target branch

Some contributors are considered as simrel committers and are allowed to push directly to this repo. Each project in the Release Train generally has a "release engineer" who has the permission to update the SimRel repo directly. If you plan to do frequent updates, and agree to do them as suggested about, and need write access to this repository location, then open a bugzilla entry or send an email to the webmaster, explaining which project you are working with, and CC the Planning Council chairperson (currently david_williams@us.ibm.com).

(Note: To control "inactive committers", once per year, usually around SR1, anyone who has not committed anything to the "build" project (governed by callisto-dev Linux group) will simply be removed from that group. So, if you need write access again (after not needing it for a year) simply re-request to be added, again stating which project you are committing changes for. [Reminder: there is at least one id, 'genie', that is a member of callisto-dev that should not be removed, even though it will show no "commits", as it is required to be there for signing purposes. See bug 362436 for problems that result from removing it.])

Contribute via a Gerrit review

Anyone who has correctly configured Gerrit as explained in Gerrit can suggest an update under the form of a Gerrit review. A committer will have to review the suggested change, and if it conforms to the requirements, the committers can merge the change from Gerrit.

In order to suggest a change, a contributor only has to push it to the repository, using the following pattern for target branch: refs/for/_targetBranch_, so if a contributor wants to push a change to the next release, they need to push the change to refs/for/master; if it's for Kepler, use the target branch refs/for/Kepler_maintenance. After successfully pushing (either with EGit or Git CLI, the remote Gerrit server reports an URL where to follow the review.

Currently, no-one is assigned to the review of suggested change, so the contributor must notify a simrel committer of the suggested change. In general, it's recommended to ask that to the release engineer for the project you're willing to update. 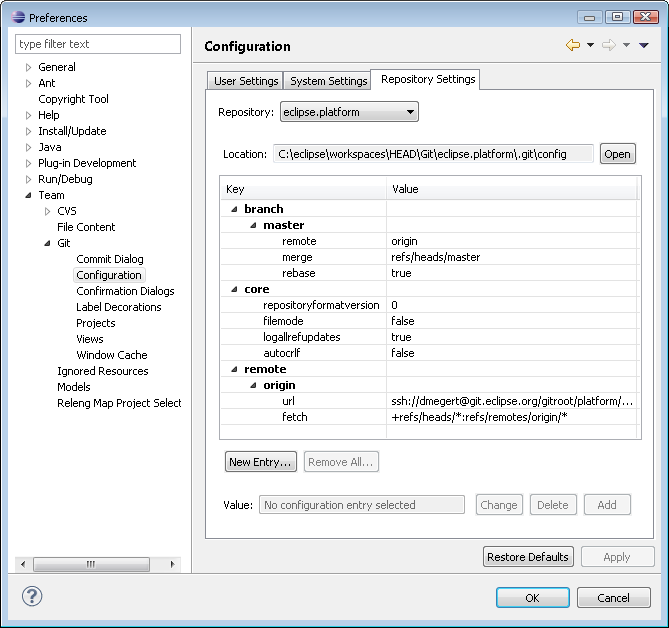