SMILA/Specifications/Management Of The Smila Components

Some Smila components have to be managed.

This article is written on the basis of discussions with Dmitriy Hazin and Ivan Churkin.

Let's discuss a problem on an example of management of an index.

The core of the SMILA system – consisting of Router -> JMS queue -> Listener -> BPEL processor - works with Record objects. Or in other words the record connects all components of the system.

The Router pushes the record in the JMS message queue ( ActiveMQ). The records are collected in the queue where they await further processing. The Listener orders the queue and invokes the respective pipeline for each record. Currently Smila has 2 pipelines: The AddPipeline and the DeletePipeline, which invoke several services and one pipelet to process a record. 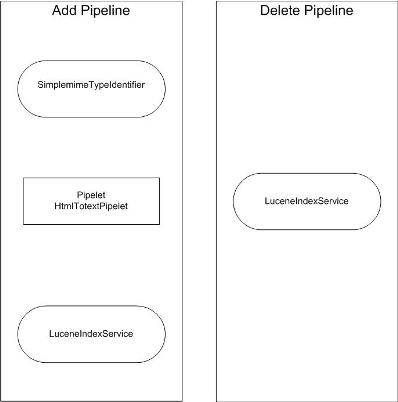 As shown in Figure 1, the AddPipeline invokes the SimplemimeTypeIdentifier service and the pipelet HtmlTotextPipelet which prepare the record for adding it to an index, and then the LuceneIndexService which directly accesses the index for the adding of the record to the index.

The DeletePipeline invokes the LuceneIndexService for deleting a record from the index.

LuceneIndexService accesses an index by means of two methods:

Thus the system has no direct reference to the Lucene index implementation as such. All indexing operations are carried out by calling methods of the LuceneIndexService.

On this basis there are two ways of implementation of the index management:

Management by the pseudo records

A pseudo record does not contain any data apart from the index command as part of its meta-data. Its sole purpose is to tell the LuceneIndexService which operation is required: deleting, renaming or creating of an index.

Create an additional pipeline “IndexManagementPipeline” to send pseudo records to. For this pipeline 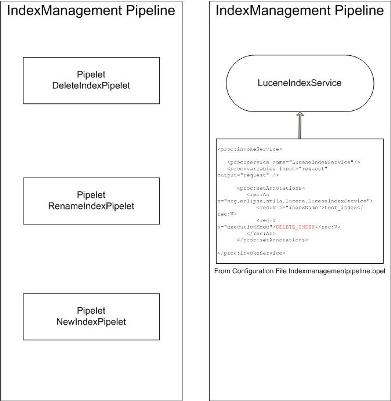 Advantages of the given approach

(This is especially important for the distributed system)

Directly invoking the LuceneIndexService will also lead to a desirable result. However, a solution in this fashion requires surgical interference with the system (requirement to implement new methods) and cannot be considered correct. The requirement for new functionality would always require changes to the API of the system. The direct approach does not use the possibilities of the SMILA system and does not allow to control the index operations in the standard way.

It was decided to use standard management agents. Exactly like in the crawler controller management.

This page was last modified 05:06, 4 May 2009 by Juergen Schumacher. Based on work by Ivan Churkin and Sofya Zhbankova.