The WorkerManager service of SMILA provides an environment to make it easy to integrate, deploy and scale Workers, i.e. classes that implement a functionality to be coordinated by asynchronous workflows of SMILA. The WorkerManager service provides all the managements of tasks and data objects to be consumed and produced by the worker so that the implementation can focus on the real work to be done.

Workers are implemented as OSGi services that are referenced by the WorkerManager and announces its name via a getName() method. The WorkerManager then reads the worker definition from the JobManager to check if the worker is known to the JobManager and to get access worker modes or other definitions. It asks the TaskManager for available tasks to be done by this worker. If it gets one, it creates a TaskContext, that wraps up all data and facility the worker function needs to process the task: 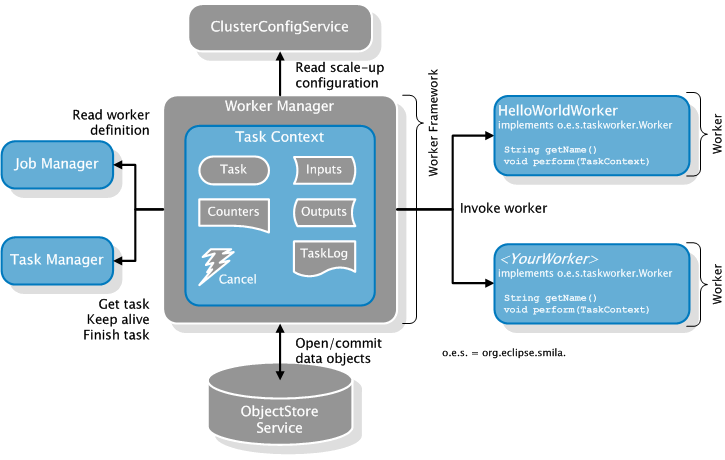 There are four possible outcomes of a worker's processing:

There is currently no other way for the workers to influence the task result.

A task assigns "data objects" to the input and output slots of a worker that represents objects in a objectstore. The WorkerManager framework provides so called IODataObjects that encapsulate the access to these objectstore objects, so the worker does not need to know in detail how to work with the objectstore API. Apart from encapsulating the objectstore API and taking care of proper committing and cleanup after task processing, these IODataObjects also provide higher-level access methods that makes it easier to handle record bulk or key-value objects, for example.

Their wrappers can be accessed via the getInputs() and getOutput() components of the task context. Of course, these inputs and outputs managers give also access to the plain bulk info objects using getDataObject methods. However, in this case the worker function must clean up and commit by itself after finishing processing, so this should probably be used if you need only the object ID of an object, but not the actual content.

You can create only a single IO wrapper for each data object. On the second call, only null will be returned.

For the Stream and Record wrappers the Inputs/Outputs classes provide special getAs... methods. For other wrappers you can use the generic getAs...(String slotName, Class wrapperClass) methods. Additionally, this allows you to create your own input/output wrapper classes and get them managed by the Inputs/Outputs framework.

If the WorkerManager receives an 404 NOT FOUND response when trying to keep-alive a currently processed task, it sets a canceled flag in the associated TaskContext object. The worker should regularly check this flag to see if it should still continue to process the task or if it can abort. If so, it can just return (after releasing and cleaning-up used resources that are not part of the task context, of course), the WorkerManager will not commit the results in this case and will not try to finish the task.

This page was last modified 09:42, 8 January 2013 by Daniel Hänßgen. Based on work by Juergen Schumacher, Andreas Weber and and others.