This page describes how to edit SMILA pipelines in the BPEL Designer.

The BPEL Designer is an eclipse project that offers support for editing WS-BPEL 2.0 processes. Like other eclipse projects it may be extended using plugins. The SMILA project offers such plugins for editing SMILA specific activities (to invoke SMILA "pipelets" from a pipeline).

First you have to install the BPEL Designer:

Now we have to add the plugins that extend the BPEL designer for SMILA specific features.

You can either build the latest version of our plugins from repository (see below) or just use our update site: http://download.eclipse.org/rt/smila/tooling/update-site/
The installation is the same as for the BPEL Designer above.

Now you can edit SMILA pipelines with the BPEL Designer. If you'd like to start with some example BPEL files, you could use the ones from the SMILA application configuration

If you'd like to modify the SMILA designer plugins or compile the latest version from repository, do the following:

Don't forget to inform us if you have a really cool modification that you would like to share ;-)

This showcase is not actively supported anymore by the SMILA project. The following description has not been tested with current Eclipse releases and might or might not work. Feel free to test it and improve it. ;-)

The Rich Ajax Platform is an Eclipse project that enables RCP applications to run in a web browser. During the implementation of our BPEL Designer extensions we tried to run the BPEL Designer as RAP application.

Here is a screenshot: 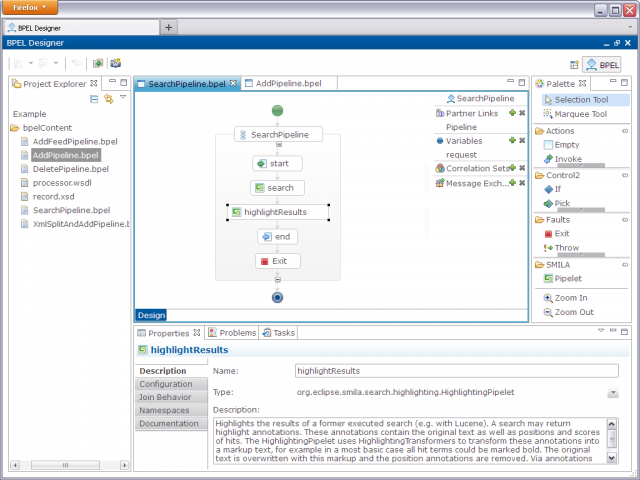 This was just a proof of concept - so many things aren't working up to now (or at least not as expected):

How to set up the example

You can create a project by right clicking in the explorer and selecting "New/Project.../General Project" (the BPEL project is not working due to missing plugins).

The best way to add files to your project is adding them to the workspace of the launch in the file system and then refreshing the project in the project explorer.

To open files, you need to select "Open" in the context menu of the file, double clicking does not work up to now.