The Clean Code Method Sorter is a lightweight plugin for the Eclipse Platform. It provides techniques to sort methods in Java-classes, aiming to increase the readability of the source code.

Methods are reordered following the news-paper-metaphor conceived by Robert C. Martin in his book "Clean Code": A class should be readable like a newspaper, with the most important methods being at the beginning of the class, followed by methods which are invoked later in the execution flow.

Further organisation possibilities are provided by method clustering according to:

Please download and install the plugin using the update-site.

Currently, no issues or bugs reported. Please report any encountered bugs here or drop me a quick note per mail (suggestions are also welcome). Tested in Eclipse 3.6.2 and 3.7.

In future versions the following features are planned:

Caveats: The plugin sorts methods, but sometimes has to sort other elements as well, as nested types, enums and fields. Usually real-life classes have no fields scattered among methods, but types are more common to be found in the middle of the class. When the method sorter is executed, these will be sorted similar to the "Member sort..." operation: Types, enums and fields will be sorted before or after constructors and methods, so your carefully placed type will be moved somewhere else (sorry about that). The order of the this other element-types is "borrowed" from the "Members Sort Order"-preference pane. In future builds this behaviour might change, where types may be considered as parts of the invocation chain of a class.

This plugin is developed by Mateusz Parzonka as part of an university hands-on at the Technische Universität Darmstadt (Germany), supervised by Marcel Bruch and Andreas Sewe.

The plugin mainly provides a "Sort Methods..."-Operation which can be triggered from different point in the GUI.

When a Java-class is opened in the Java Editor, the source menu should be visible in the main menu bar. The plugin augments the import-group in the source menu with a command labeled "Sort methods…". Triggering this command lets the Clean Code Method Sorter sort the methods in this class.

Per default, the command is bound to the keybinding "Option-S" (Mac) or "Alt-S" (other platforms). User-defined keybindings are possible: Search for the command "Sort methods…" in the "Clean Code"-category in the keys-preferences-menu. 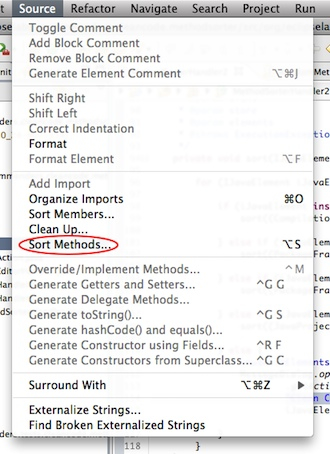 When selecting Java-specific content in the Package Explorer a right mouse-click (context-click) activates the associated pop-up-menu. In the Java-context, a source-submenu is visible. The plugin augments the import-group in this menu with the command labeled "Sort methods…", which will sort all methods in selected objects and their child-objects upon triggering.

"Sort methods…" can be called on any selection of

After successful sorting, a message will appear showing the number of processed classes.

This is the default setting. As explained more detailled in the setting descriptions, the plugin calculates a method ordering using multiple criteria. Try it to see if it suits your needs. 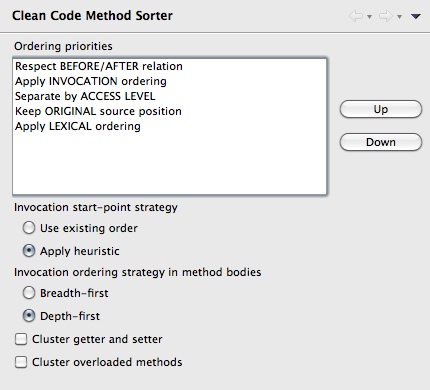 Users can priorize (using the up/down buttons) the properties used to sort the methods. The priorities can be seen as layers. When two methods are compared, the current highest layer is queried to resolve the ordering. If the methods appear to be in no ordering relation to each other, the next layer is queried until an absolute ordering is found. Since properties like original source position provide absolute orderings this criterium is always met. Bear in mind that these layers form a natural border for lower priorities, beyond that no other layer will be reached.

The prefence-GUI does not fully reflect this 'border'-property. This will be adressed In a later revision of the plugin.

When set to true, the sorting algorithm tries to find an ordering where methods are ordered before methods following in the invocation chain. What is the difference to pure invocation ordering, you may ask? To traverse call chains you have to select start points. As a result some start point p may be entered after a method m is called by p yielding an ordering of p-after-m, which may be not desired. This option corrects this behaviour.

Using a working list of invocation start-points all invocation chains are executed. Methods are enumerated by their first execution or invocation. The enumeration is absolute, ties are not possible. Lower levels will be reached.

When this layer is reached, all methods are sorted using the original (existing) position in the source code. Since ties are logically impossible lower layers will not be reached.

Methods are separated according to their access level (aka "visibility"): public, protected, default, private.

Methods are sorted by lexical (alphabetic a->z) ordering. No ties in this layer, lower levels will not be reached.

Following the news-paper-metaphor the invocation-relation between methods is one of the strongest clues to derive a method ordering. Since classes usually offer some interface callable by clients, the invocation chain(s) can begin from several points. The user can select two different strategies to priorize the invocation start points:

A method can have multiple invocations in its body. This leaves us two possibilities to traverse the invocation graph to derive a method ordering: We can go "deep" by entering each method we encounter and processing the methods there, or we can go "broad" by processing all methods in the body before going to a lower level in the invocation tree.

The traversal mimics the behaviour of a breadth- or depth-first-search algorithm. Thus, the options are named accordingly:

Which setting is better is a matter of taste. Depth-first is set as default, as it seems to be more consistent with the original description by Robert Martin and a non-representative set of beta-testers prefers it.

The user can activate the clustering of getter and setters denoting pairs of methods where the methods:

The clustered methods form a subgraph which is ordered using the same parameters like its supergraph (except applying clustering).

The user can cluster overloaded methods which are methods that have the same name but have different parameters. Overloaded method clusters are handled as subgraphs and sorted individually.