To achieve that, Papyrus Compare builds on and extends EGit and EMF Compare, respectively, in order to customize them to seamlessly support their usage with Papyrus models. Papyrus Compare is an extra component of the Papyrus project but is not part of the Eclipse release train.

To add the update site, open the menu Help → Install New Software... and click Add.... In the Add Repository dialog, enter an arbitrary name, for instance Papyrus Compare, specify the location depending on the preferred stream as listed above, and click OK. 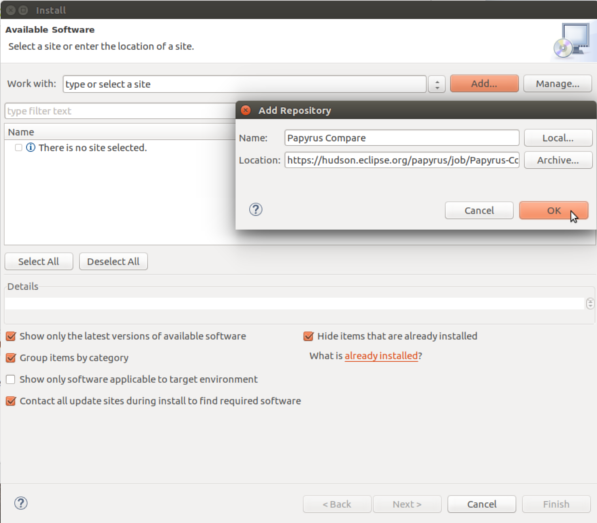 The installation will start in the background and may take a few minutes to finish, depending on your internet speed and the availability of the Eclipse servers. You can view the progress of the installation when you click on the progress button in the lower-right corner of the Eclipse window. If you are installing the nightly stream, you may see the warning above, as this build is not signed.

Please click Install anyway if you are fine with installing unsigned content. Once the installation is finished, you will be asked to restart Eclipse. Please click Restart now to restart.

If everything went fine, Papyrus Compare is successfully installed.

There are various configuration options to consider. In the following, we list the recommended preference settings. Especially the first one is necessary to allow Papyrus Compare to handle Papyrus models during the git merge operations. To configure the preferences, open the menu Window → Preferences.

You are all set and can now start using Papyrus Compare.

The user documentation is work in progress. In the meantime, please refer to the video tutorial and to the EMF Compare User Guide, in particular, the user interface documentation and documentation of how to compare models with EGit.

Clone the source code repository and run the following command to build the nightly stream or the integration stream.