This tutorial will show you how to install Papyrus for Real Time.

Note: You will need Java 1.7 installed.

Note: The instructions in this tutorial are illustrated using Linux. Steps and images may differ slightly if the installation is done on a different operating system (both Windows and Mac OS are supported for developing models). Some of these differences have been indicated when known, but some may also be missing.

Install a base Eclipse platform

First, we will install a base Eclipse package upon which we will be able to add the required software component for Papyrus for Real Time.

Note: If you are installing into an existing Eclipse workbench, skip this step and go directly to step 2.

Install a base Eclipse package

Note: The base Eclipse IDE for Java Developers package does not include Papyrus, which is the base for Papyrus for Realtime. We will need to install Papyrus for Real Time after this base package is installed

The "Welcome" view is the default view after installing Eclipse. 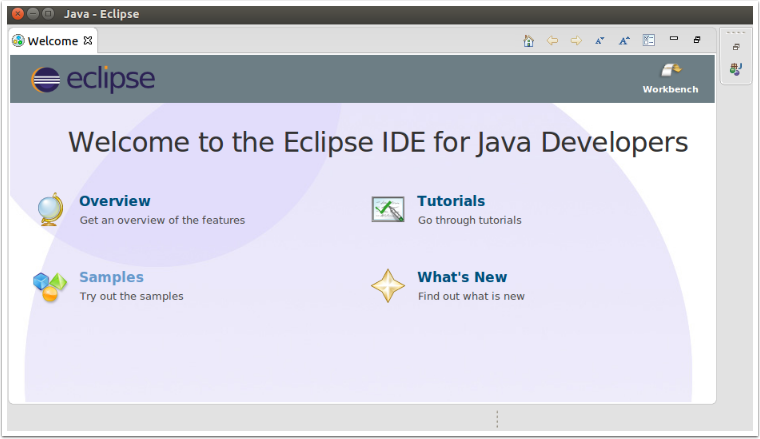 Now that a base Eclipse environment is installed and available, we will install the remaining components needed for Papyrus for Real Time.

The base for Papyrus for Real Time is, of course, Papyrus UML. Since the base Eclipse IDE for Java Developers package we installed in the previous steps does not include Papyrus, let's install it first.

Because Papyrus for Real Time is not on the same release schedule as Papyrus, we will install a more recent update of Papyrus rather than the last formal release. 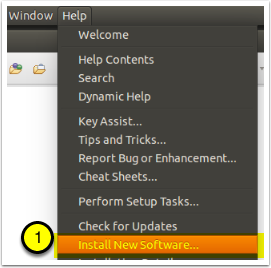 Papyrus for Real Time needs a recent versions of the Mars Papyrus installation, so we will install it from the it's update site. In order to do that, we need to add the "Papyrus Mars Release Updates" site to the list of available software site.

Select the software to install 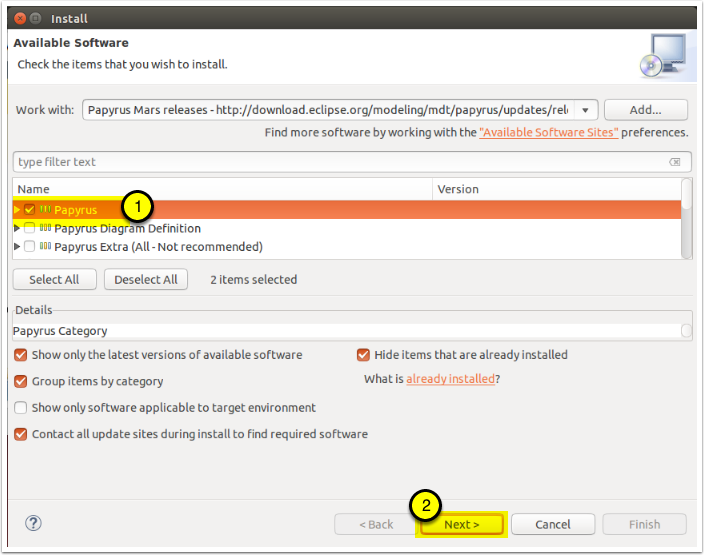 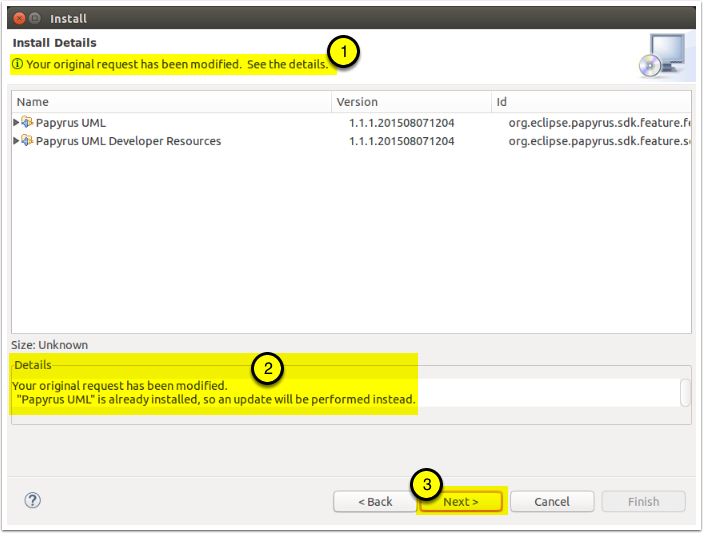 You will now need to review and accept the terms of the license agreement before installing. 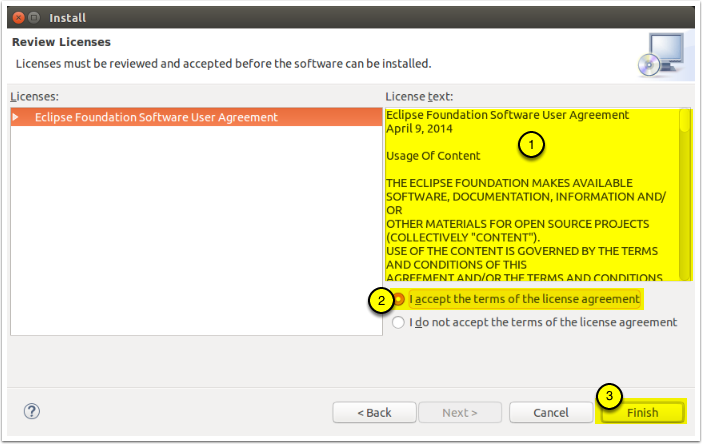 After all updated components have been downloaded and installed, you will have to restart the workbench.

Papyrus is now installed in the Eclipse workbench 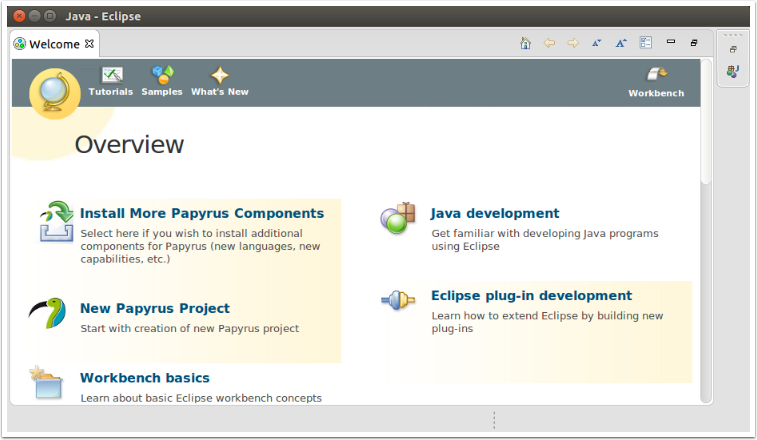 Now that we have a good version of Papyrus, we can install the Papyrus for Real Time components: 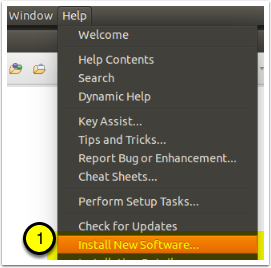 Because the Papyrus for Real Time is still in incubation and not part of the Mars release train, we will have to add a new location from which components can be installed.

There is only one component, so the choice is easy 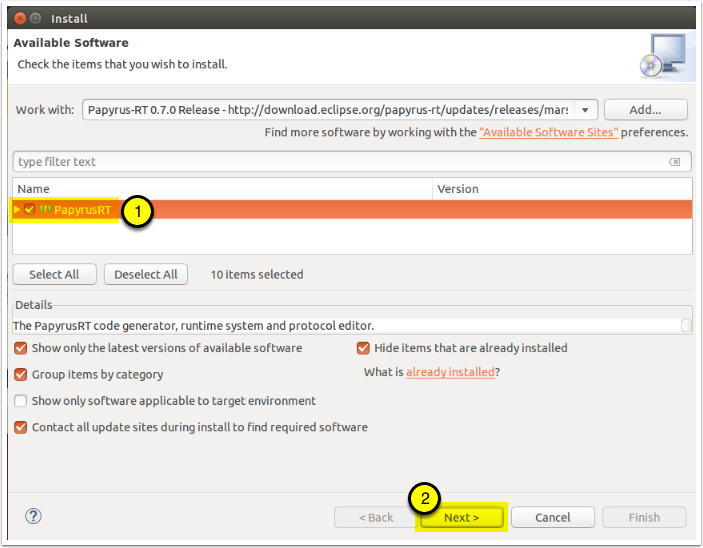 Review the items to install

After checking all the dependencies, you are presented with a dialog to "Review the items to be installed". 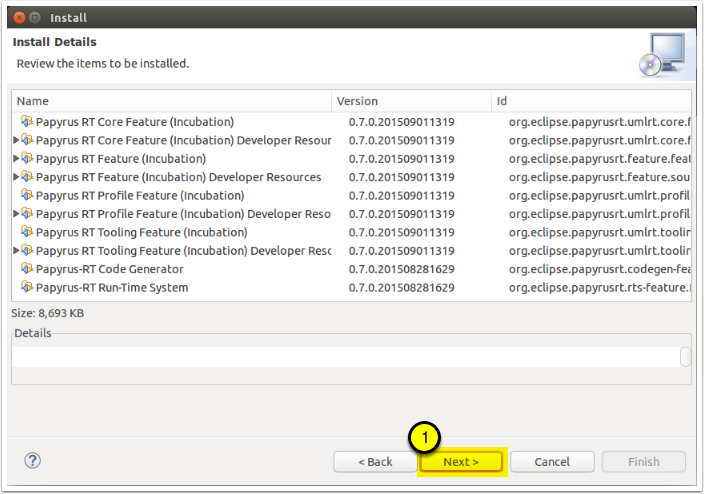 One last time, you will now need to review and accept the terms of the license agreement for the new software before installing.

Agree to install the software

As this software is still in incubation, some of the components are still unsigned.

After all Papyrus for Real Time components have been downloaded and installed, you will have to restart the workbench.

Switch to the Papyrus perspective

We can now switch to the Papyrus perspective in order to start modeling. 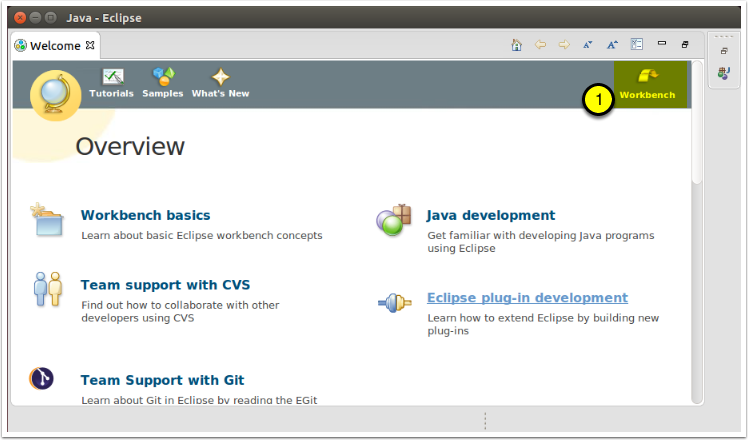 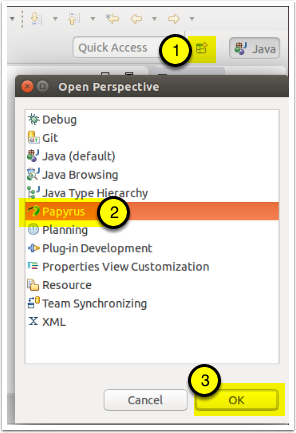 If you do not need the Java perspective, you can remove it.

Set the viewpoint for UML-RT

In order to get all the benefits from Papyrus for Real Time, you will need to set the correct Papyrus viewpoint.

in the "Preferences" dialog: 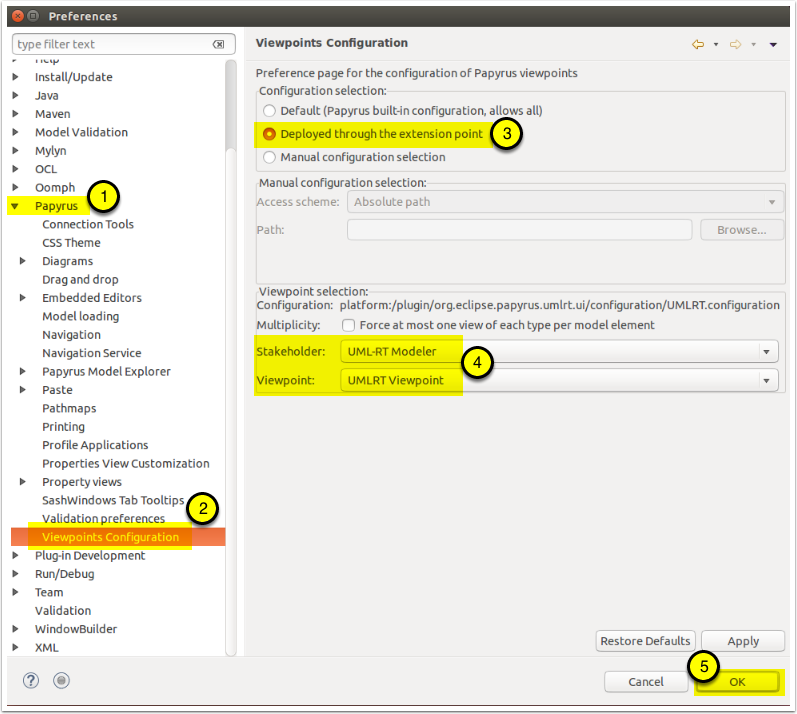 Done! You are now ready to create models! 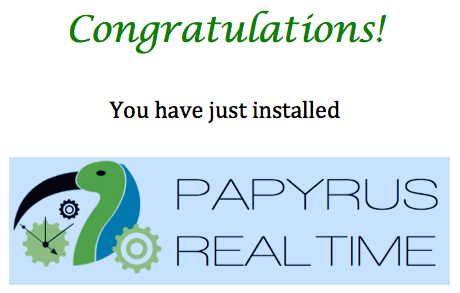