The code generator input is a UML2 model (org.eclipse.uml2) with the UML-RT profile applied to it. The output is a CDT project (C++).

More precisely, the input to the generator is a list of UML2 elements that have changed. When invoked from within Papyrus, the tool keeps track of which elements have changed since the last generation.

There are two intermediate meta-models:

The overall generation process is depicted in the following diagram:

The rationale for the intermediate models is as follows:

The core of the code generator consists of separate sub-generators for different kinds of elements. Namely:

The following tables provide a description of the features and plugins that form the code generator.

The core consists of the following classes. Most are in the org.eclipse.papyrusrt.codegen.cpp plugin.

This class is the one that begins the generation process from the UI or the standalone, and invokes the "generation director" (below).

This class drives the generation process. More on this below.

This class provides an interface to the C++ language meta-model, as it is used in this transformation.
It produces and keeps track of which C++ element has been generated for any given (xtumlrt) model element.

This is the base class for individual code generators for specific UML-RT elements.

This tracks generator instances for different types of elements.
It is a base class for Eclipse-based and stand-alone generator managers.

The following diagram shows the class diagram with the general structure of the code generator: 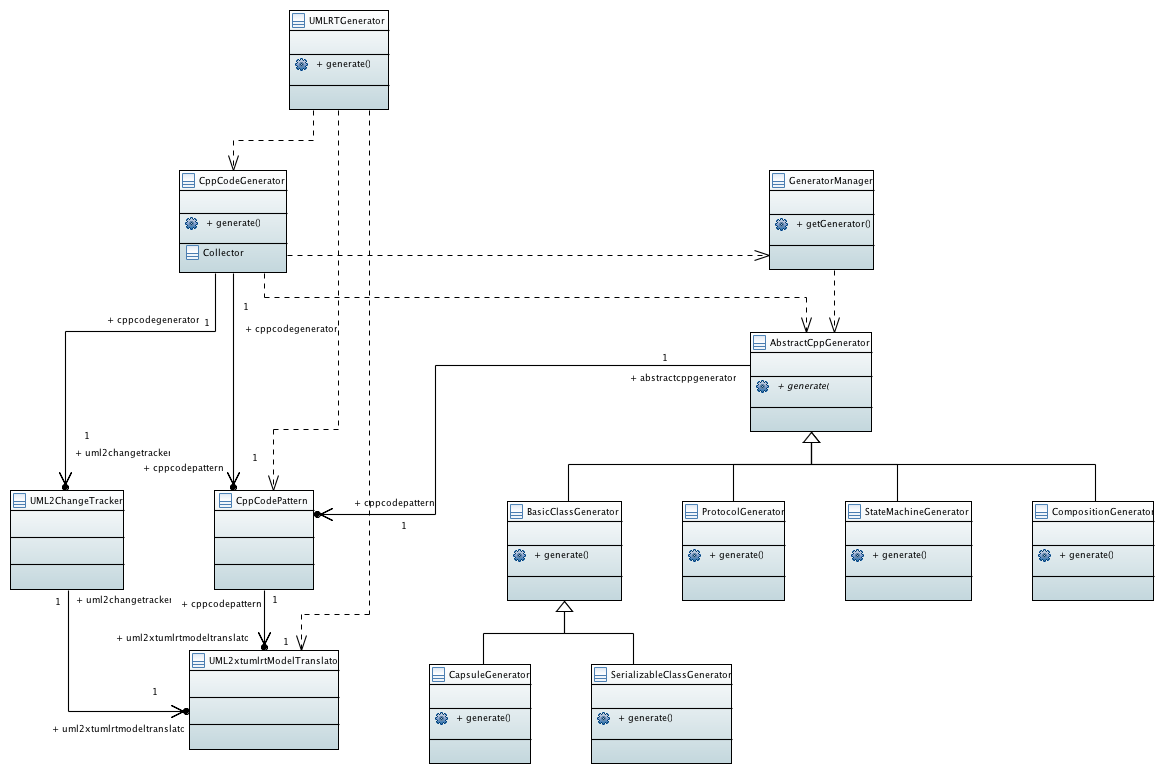 This class has a generate method that receives a list or target EObject elements, expected to be instances of org.eclipse.uml2.uml.Element. Roughly, it does the following:

This class contains references to:

This class has the main method generate that performs the generation.

The input is a list of target xtUMLrt model elements (typically translated from UML2 by the UI or the standalone generator). This input is passed to the constructor of CppCodeGenerator.

The generate process itself performs the following steps:

This class provides an interface to the Cpp meta-model and is used to share C++ model elements generated by different parts of the generator.

For example, suppose that there is a Capsule C1 with a port typed with a Protocol P1 in the model. If the input list of target elements is [P1,C1], then ProtocolGenerator.generate is invoked first on P1, which will in turn invoke the CppCodePattern.getCppClass method to obtain the C++ class model element for P1. Then, CapsuleGenerator.generate is invoked on C1, which will generate the code for its ports, and when doing so, it will try to obtain the C++ class for P1 from the CppCodePattern, and since it was already computed for P1, it obtains the same C++ model element. If the input list of target elements was [C1,P1], the C++ class for P1 will be created when the CapsuleGenerator is translating C1 and tries to obtain the corresponding C++ class for the protocol, while the execution of ProtocolGenerator.generate will obtain that class as it has already been computed.