This document describes the design of the Remote Project Synchronization framework. It is based on the original proposal by Roland Schulz and others

Eclipse projects (including C/C++ projects) are traditionally stored on the local filesystem of the machine on which Eclipse is running. This is adequate for Java, since the bytecode is inherently portable, and for embedded development, since a cross-compiler environment is typically employed. However it does not suit the development of HPC applications because it is generally very difficult to replicate the environment of the target system on the local machine. In order to overcome this limitation, the Remote Development Tools (RDT) component of PTP added support for remote projects. However, the approach taken has a number of serious limitations that preclude it being used to develop many applications. Although the functionality of RDT has improved, the main issues that still remains outstanding is that it only supports C/C++ projects and is not a general solution that can be used for other languages and project types.

Remote Project Synchronization is an alternative to RDT that overcomes many of RDT's inherent limitations. Synchronized projects work by maintaining both local and a remote copies of the source code, and these two copies are kept in synchronization by Eclipse. The advantage of this approach is that Eclipse is able to operate on the local copy as normal, and does not need to be concerned with network delays or other issues. No special changes to the project infrastructure are required, since the project just looks like a normal local project. The remote copy of the code is maintained in order to be able to build the application in the environment present on the target system without needing to copy the entire source tree each time. This allows any native compilers or libraries that are present to be utilized without the need for this environment to be replicated on the local machine.

The three different project types are shown below.

In the local project, the primary Eclipse services, such as editing, indexing, searching, navigating, building etc. operate directly on the local project, which is located on the local filesystem of the machine running Eclipse. For remote projects, these services are proxied by an agent running on the remote machine, which must provide remote equivalents of the services Eclipse uses locally. Because the index, search, and navigation services tend to be very language specific, a different agent is required for each language that is to be supported. Currently an agent is only available for C and C++. In the case of synchronized projects, editing, indexing, etc. operate on the local copy of the project. Only the project build needs to be run on the target machine. Because this service is more generic than the language services, it is available for more languages (currently C, C++, and Fortran). To support other languages, such as python or Java, a remote version of their builders would also need to be provided. This is a much simpler task than adding services for a different language.

A number of principles underpin the design of the synchronization framework. These provide goals that, although they may not be met initially, the implementation can work towards in future revisions. These principles are as follows:

The synchronization framework is designed to be extensible, so that different synchronization providers can be provided to suit different environments. This is achieved by adding a new service called org.eclipse.ptp.rdt.sync.core.SyncService to the services framework provided by PTP. To add a new synchronization provider, a plugin must supply a class that implements the ISyncServiceProvider interface, then registers this class using the org.eclipse.ptp.services.core.providers extension point. The services framework will then manage loading the class at the correct time, persisting data, etc.

The ISyncServiceProvider provides the following methods:

The synchronization user interface is provided using the context menu on a project, as shown below.

The "Synchronization" menu provides the following options and commands:

When a synchronized project is created, or an existing project is converted to synchronized, a remoteSyncNature is added to the project configuration. Only projects with this nature will be recognized by the synchronization framework. Projects that have this nature are decorated in the Project Explorer view to indicate that they are synchronized.

In addition to synchronizing on a resource change, projects will also be synchronized prior to a build. For CDT projects, the framework registers a remote builder using the org.eclipse.cdt.managedbuilder.core.buildDefinitions extension point, and adds this builder to the properties for the project. When the project is built, the ICommandLauncher#execute() method is invoked by the CDT managed build framework. PTP provides an implementation of ICommandLauncher called SyncCommandLauncher that will first initiate a synchronization, then issue the appropriate remote commands to build the project. 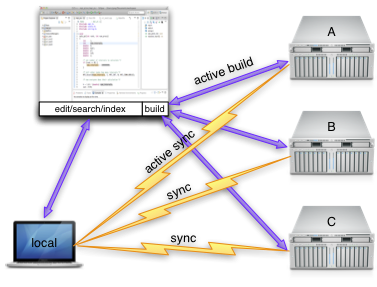 In the above diagram, a project is being synchronized to three remote hosts, A, B, and C. The "active" configuration is currently set to host A, so when a build or synchronize is performed, it will automatically use that host.The user can override this by use the "Build All" or "Synchronize All Now" menus.

This wizard is used to create a new synchronized project from scratch, or to synchronize with an existing remote project. It comes in two flavors, one for creating C/C++ projects, and one for creating Fortran projects. The only difference between these is that the latter wizard adds a Fortran nature to the project, so should be used if the project is likely to contain any Fortran code. The user interface is shown below. 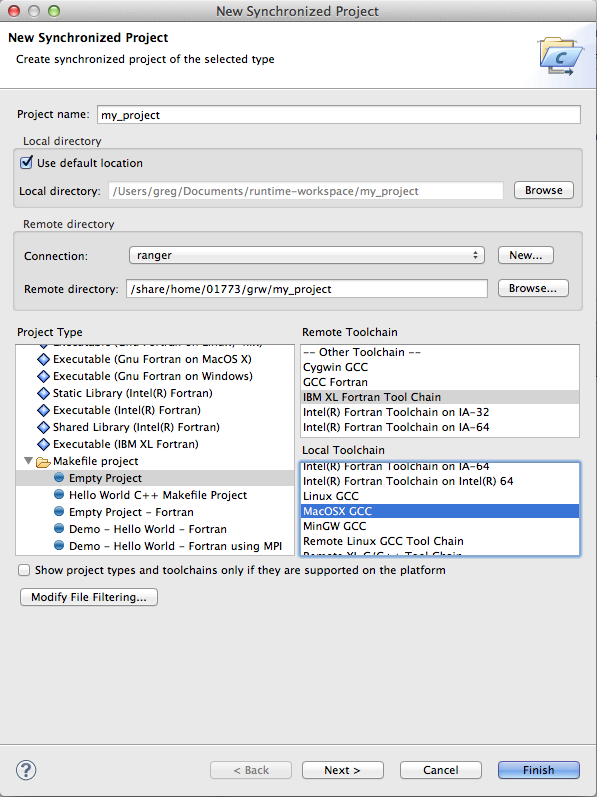 The wizard is similar to the normal C Project or C++ Project wizards in that it allows the user to specify a project name, location, select the project type, and choose the toolchain. In addition to these however, the wizard allows the user to select a remote location for the project, which is the location that will be used to synchronize the remote files, and a remote toolchain that specifies the toolchain that will be used on the remote machine. If the remote project location already contains resources, then these will be synchronized with the local project immediately upon completion of the wizard. 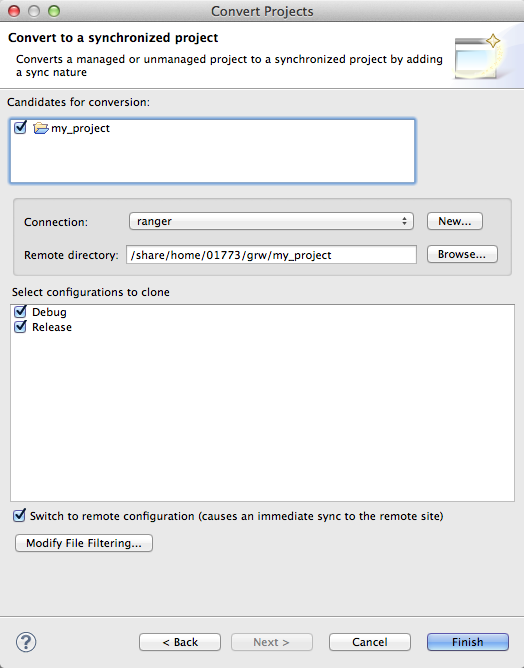 Being able to specify which files are synchronized is essential, especially for projects that contain large numbers of object files or large data files that are not necessary for application development. Filtering is provided on a per-project basis, and can be used to specify exactly which resources are included or excluded from the synchronization. Default filters can also be set in the Eclipse settings, and these are inherited by a synchronized project when it is created. By default, the following resources are excluded: .ptp-sync, .settings, .cproject, and .project.

In the current implementation, two types of filter patterns are available: 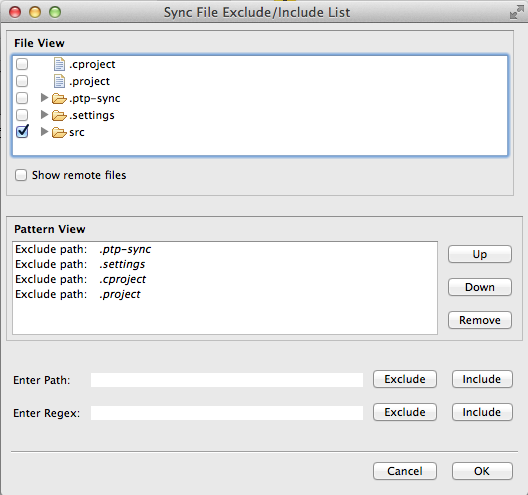 The File View area is used to include or exclude resources directly (using the checkbox next to the resource), and will also show which files are being included or excluded based on the patterns. The Pattern View shows the currently defined patterns and allows the pattern ordering to be altered. Patterns are applied in order from top to bottom. A new path or regex pattern can be added by entering the information in the appropriate text field and selecting either the Exclude or Include buttons as required.

One of the advantages of synchronized projects over remote projects is the ability to operate without a network connection. Off-line operation is automatically managed by the use of asynchronous synchronize operations. If a connection to the target system is unavailable, the operation will be queued in order until network connectivity is restored, at which time the operations will be performed. The user does not need to take any action for this automatic behavior to be enabled.

A caveat to off-line operation is that building remotely while off-line is not possible. If the user attempts to build while off-line, then the build will fail and any subsequent synchronization operations will be discarded. [verify this behavior]

To present an accurate reflection of the remote environment, system include files need to be fetched from the remote system for the preprocessor and indexer. This requires changes to the preprocessor and other parts of CDT/Photran in order to obtain the header file from the correct remote system rather than from the local system. To avoid performance issues, header files should also be cached locally where possible, but this must be an option as licensing issues may prevent it on some systems.

Compiler (and makefile) defined macros play an important part in determining which header files will be included as well as which parts of the code will be enabled or disabled. CDT attempts to determine these macros using a process known as scanner discovery. This involves running commands on the target system to determine the macros that are defined. This process is inherently complex because every system has different compilers with different options for determining this information. RDT has already provided some remote scanner discovery functionality, so we plan to reuse this for synchronized projects.

Currently the only mature synchronization provider uses the Git protocol to manage synchronization. Some work has been undertaken to develop a provider based on Rsync, but to date this has not been completed. The Git provider uses the JGit feature to provide a Java implementation of Git for Eclipse. Git also has the advantage of being very fast, even for a large number of small commits.

It is outside the scope of this document to describe the details of the Git implementation.

In order to support the synchronization of other projects, such as Java or Python, the synchronization configuration information needs to be maintained in a different manner. This could be either using a project-specific location (such as CDT's build configurations) or as generic information in the project properties. In addition, building these projects remotely requires a different remote builder implementation, since they are unlikely to use Makefiles as their primary build mechanism.