The purpose of this documentation is to give the minimum information to deploy your own decorator for Papyrus elements as EditPart. To manage decorator on Edit Part two solutions are provided by Papyrus:

Decoration Service is compliant with gif, ico, bmp, jpg and png files. Contextual message can be set for each decoration, and propagation to parents can be allowed. Unlike Decoration Service, Shape Service is only compliant to svg files, but the position of the shape can be selected within in the properties view. Others differences are that the shape can be displayed in the symbol compartment and it can be used as the shape of the figure.

GMF Decorator Service Framework can also be used to display image. As the Decoration Service from papyrus you will be available to display several formats of images.

The decoration service architecture has already been described on a document (here). You will find a description of main interfaces or classes to be implemented or to be called in order to use the framework and add specific decoration.

Decoration service permits to manage decoration on EObject. Decorations are added through this service. It provides listener to observe changes. This service can be retrieved with:

Add a new Decoration to a decorations Map with an IPapyrusMarker associated to an element.

Add a new decoration without passing by a marker.

Return an Interface of decoration (IDecoration) for the element 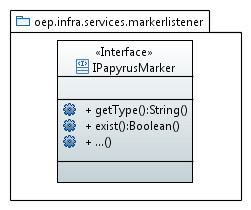 IPapyrusMarker provides a protocol for markers that annotates elements with information, often used for problems. It is an analogy of the Eclipse IMarker API for resources in the workspace, to be implemented in order to create its own marker used for custom decoration.

Return the type of the concret Papyrus marker. Is also used to link a decorator to the marker(see Decoration Image Extension Point).

Return true if the marker exists on the view. 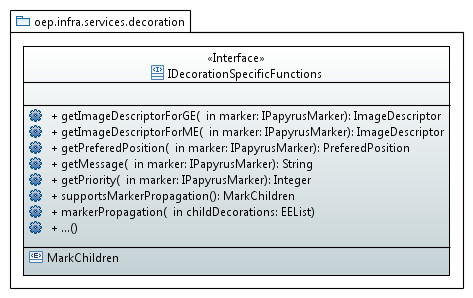 This interface allows to access a set of functions that depends on the decorator type. The objective is that plug-ins for a specific decoration type can implement this interface (via an extension point) to provide the information that depends on the decoration type, notably the used icons, their position, the way how messages are calculated and how decoration might propagate from children to parents. To be implemented in order to create its own decoration.It Is related to a marker through decorationImage extension point.

Get the image descriptor for a graphical editor.

Get the image descriptor for model explorer. May be identical to the image for a graphical editor.

Return the preferred position for markers within the model explorer.

Return a textual information for the marker (used for fixing messages that do not need to be stored in each marker).

Return the priority of a decoration. This enables selecting a marker with a high priority, if multiple markers for the same model element and the same position exist.

Does the decoration type support a propagation from child to parent, e.g. in case of a problem on a parents' marker (package) might be marked as containing warnings or errors.

Provide an ImageDescription for a decoration marker. It allows to link a IDecorationSpecificFunction class to a Papyrus marker through his type. 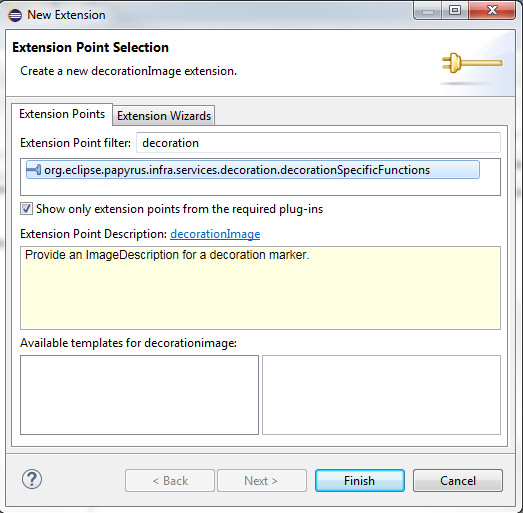 The shape service framework allows to display svg document in the symbol compartment or at a chosen position on the edit part.

The framework provides a simple abstract provider class in order to add svg shape to edit parts. Only few methods have to be implemented.

Return the list of SVG DOCUMENT or null if no shape has to be displayed by this provider.

Returns true if the provider can display shapes. This methods allows to compute if shapes can be displayed instead of computing the whole list of shapes to be displayed.

To be loaded, implemented shape providers have to be linked through a specific extension point. 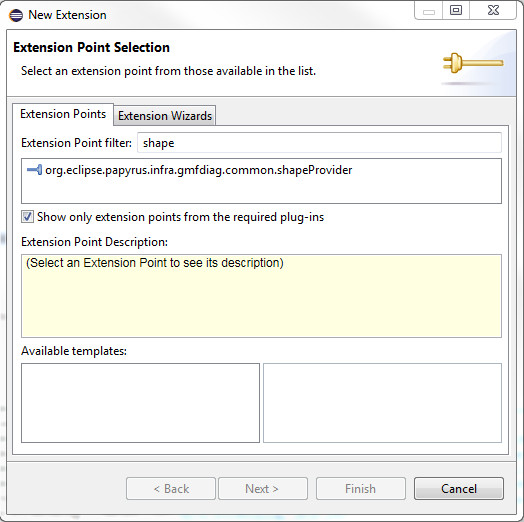 To display the shape on the edit parts and to choose the visibility and the position, attributes have to be set on the appearance tab of the properties view.

GMF provide a decorator service to display decorations on views. An extension point exists to use to load your custom decorator provider. By default the position of decoration is set according to the direction, but you can customize its location throught a locator(org.eclipse.draw2d.Locator). 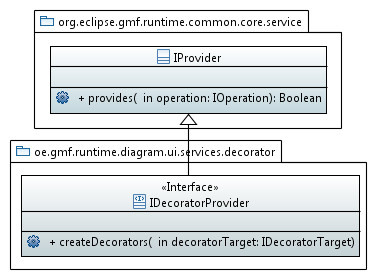 Determines whether this decorator provider supports adding decorations to a given decoration target. The operation in the provides method will be of type CreateDecoratorsOperation from which the decorator target can be extracted. 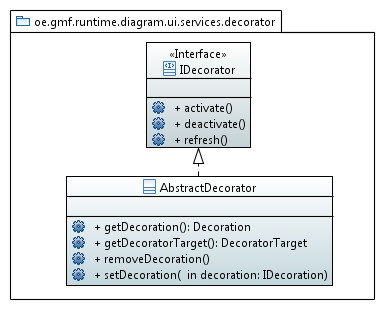 Clients can have their decorator subclass this to inherit utility methods for adding decoration figures.

Gets the object to be decorated.

Removes the decoration if it exists and sets it to null.

The decoration to set.

Refreshes the decorations. This is called when the host decorator target is refreshed.

It's the interface of targeted element. It will not implemented by client. Decorator in decorator target have some properties which can be set:

Installs a decorator on this decorator target using a key (a String identifier). If another decorator is installed on the same target with the same key then it will override the previous one installed.

Adds a figure as a decoration on a shape.

Adds a figure as a decoration on a connection.

Removes the decoration from the shape or connection it has been added to.

his extension point is used to define decorator providers for the decorator service (org.eclipse.gmf.runtime.diagram.ui.services.decorator). The Decoration Service gives clients the ability to decorate diagram elements with an image or figure. 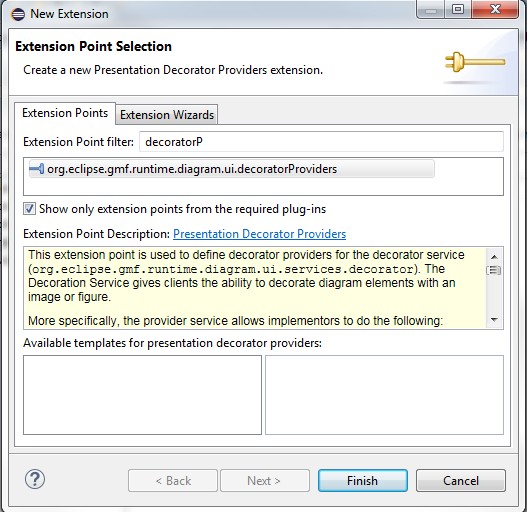 This part will provide a simple example to use available services to display decorations on edit part according to the conditions described above.

SysML profile will be used as allocation profile. An "allocation table" affects the call behavior to nodes. Nodes can be stereotyped with NodeA and NodeB stereotypes. Depending on the node on which the callBehavior is allocated, the decorator of the callBehavior should change. 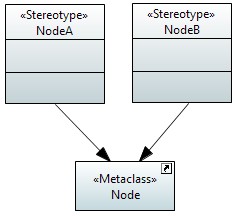 Applied on these two nodes:

And with this allocation Table:

The expected result is: 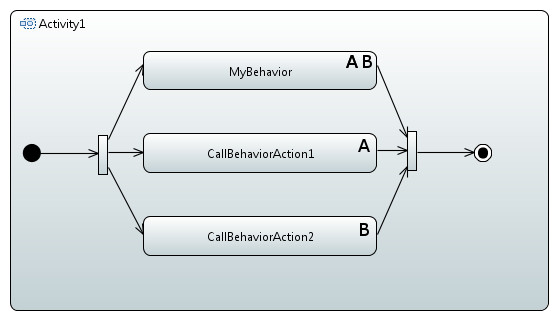 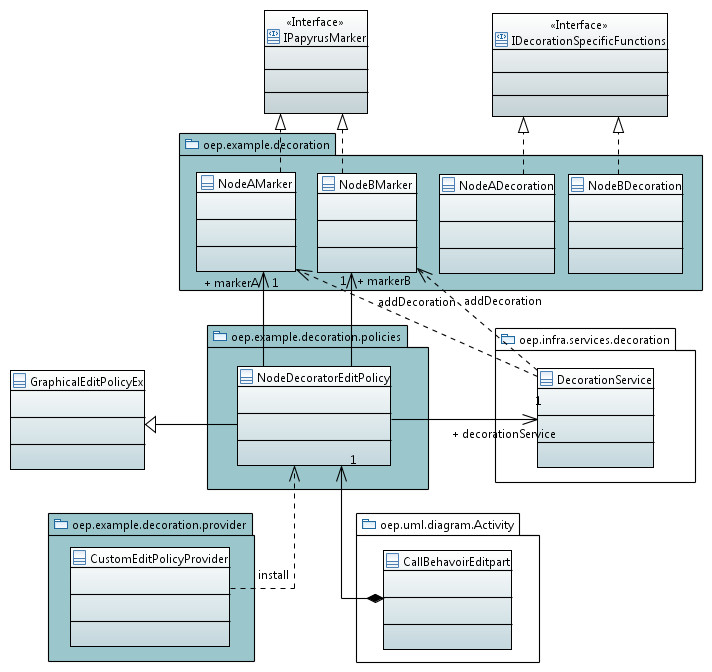 For each type of stereotype NodeA and NodeB, a marker have been implemented with a specific markerType:

These markers are added to the DecorationService thanks to an editPolicy applied to the CallBehavoir edit part.

The DecorationService is called in the Activate() method:

The refresh method adds or removes markers according to the allocated element on the UML element of the edit part:

An edit policy provider is used to install the NodeDecorationEditPolicy to the right edit parts.

This edit policy provider is installed with the editpolicyProviders extension point:

To associate decoration specific function to a marker, an extension point can be used. In the image below the decoration NodeAdecoration is linked to the marker type defined in the marker NodeAMarker.MARKER_TYPE

NOTE:this implementation does't work for now due to a NPE. A Patch is in progress to fix that.

Without marker the architecture of class to implement is less complexe. You only needs the edit policy which will add decoration to the decorationService with the provider which is the same than with marker. 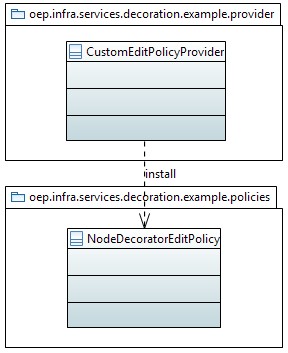 So in the refresh methode for NodeB: 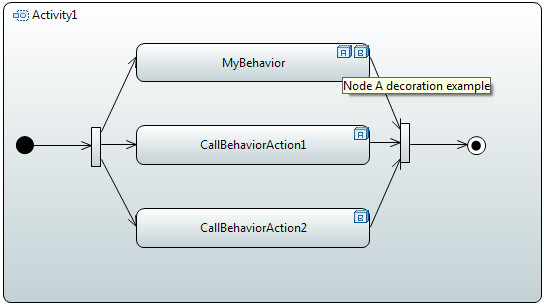 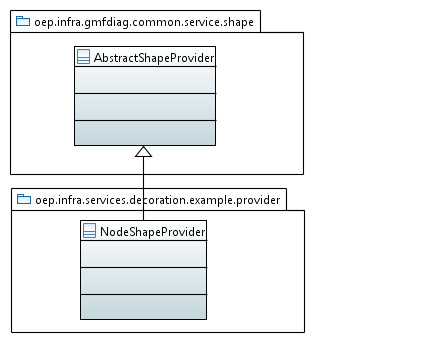 The implementated Shape provder will provide shape according to the same conditions than before.

To activate the shape provider we use the Shape Provider Extension Point: 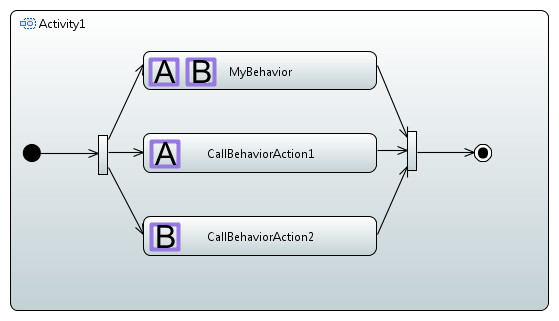 GMF Decorator framework can be implemented by many ways. The choice made here is to use Figure as decorator which contains icons. This will permits to position icons on the figure. The to locate the figure in the target à specific locator will be implemented. This permits to have a better control of the location of decoration. A tootip will be also added.

To implement it we create a provider loaded through the specific extension point. The provider will install the node decorator which use the specific locator.

The refresh methods will permit to adds the decoration.

the Figure is get with the following method:

If you don't want to use a custom locator use instead of addDecoration. A negative margin will put the decoration inside and a positive will put it outside.

To activate the GMF Decorator Provider we use the Extension Point org.eclipse.gmf.runtime.diagram.ui.decoratorProviders : 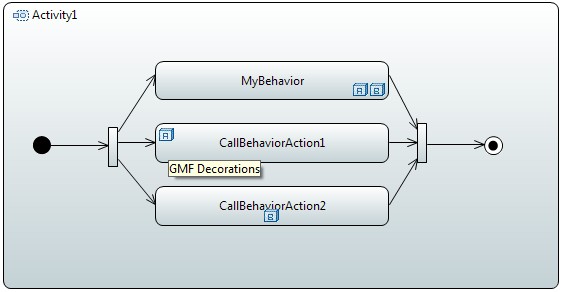 The plugin of this example can be retrieved in the Papyrus git code repository here.