This page describes continuing work on improving the static null analysis of the JDT compiler.

Support for external annotations has been added via bug 331651, released with Eclipse Mars (JDT 3.11).

User documentation can meanwhile be found in the online help:

When migrating from SE5-style null annotations to null type annotations in Java 8, a few compatibility considerations are relevant.

Null annotations in method signatures can be interpreted as null contracts, however, a more general approach considers null annotations as an extension of the type system. Since the availability of JSR 308 all type references should either include or exclude null, which allows for complete checking of any possible dereferencing of null. In other words, a fully annotated program which passes the type checker will never raise an NPE at runtime.

The above rules imply that the value from a @NonNull variable can be bound to a variable annotated with @Nullable, but the opposite direction is generally illegal. Only after an explicit null check can a @Nullable variable be treated as being @NonNull for the sake of binding to another @NonNull variable or for dereferencing. For fields the situation is actually more complex — please read "The case of fields". 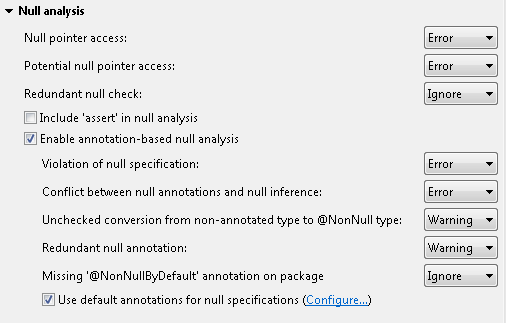 This annotation can be applied to any package, Java type or method, and has the following effect:

Java ≤ 1.7
The annotation affects all method returns and parameters with undefined null status within their scope.
Starting with Eclipse Kepler, also fields are affected (see bug 331649).
Java ≥ 1.8
Many more locations are affected, but local variables are intentionally unaffected by any default.