Cleo’s Use of Hudson As a Continuous Integration Platform

Cleo is a provider of business integration software and services, enabling enterprises to connect with their customers and suppliers, and to integrate business processes and information with internal or cloud-based applications. Cleo employs approximately 80 employees. This includes a Product Development team of 27. Seven of the 27 are full time dedicated product testers.

Four years ago we started to include Agile and Continuous Integration techniques into our development processes to produce software with greater speed and fewer defects.

The build system we were using, a commercial product, was not capable of producing or maintaining the number of builds and artifacts we needed and did not offer scalability.

We evaluated a few products and decided to switch to Hudson because it was an open source product with a good reputation, a large install base and it was designed to support continuous integration.

Shortly after, we started to evaluate Jenkins as a replacement for Hudson because Jenkins was maintaining most of the Hudson plugins and appeared to have more community activity. We abandoned this idea after seeing that Jenkins’ core functionality was less reliable than Hudson’s. We also saw, at EclipseCon 2012, the commitment to maintaining and improving the Hudson product.

With the rewrite of Hudson for version 3 and particularly with the release of version 3.1 there is no comparison. The Eclipse Project commitment, plugin support, stability, team support and a huge user community made it the clear choice.

We started with Hudson version 2.1 running on a server with 1 TB of storage with 15k RPM disk drives (Raid 0), 32 GB of RAM and dual hex-core processors.

Our initial system and job configurations addressed the building and testing of a new product offering.

This effort allowed us to have a reliable continuous build cycle that gave easy access to new builds and test results.

We then started to research how to implement a way to quickly create a “branch of jobs” to match a code branch. We support multiple versions of each of our products so we need similar or identical sets of jobs for each product version.

In addition we need similar support for developers who will be implementing major changes or large features and ultimately need to merge the branch back into the main trunk. 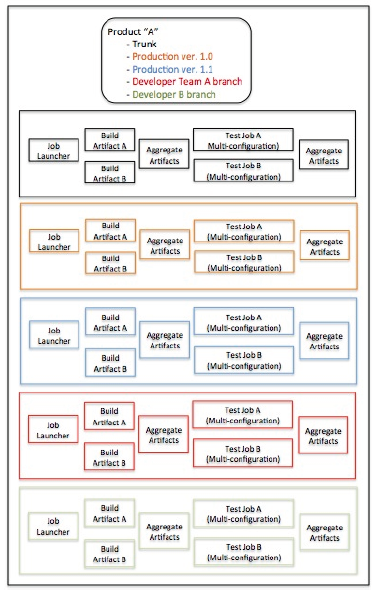 In reality we have multiple products, more versions of each product and more complicated build flows.

Our “main” Hudson project has about 40 jobs, so manually copying / modifying / joining each job takes a long time and can be extremely error prone. We wanted the ability to provide a developer or a team of developers a “branch of jobs” within an hour. Once Hudson 3.x came out with the Team Management Concept and accompanying team copy feature we were able to copy the entire set of a team’s jobs within seconds. All references important to us are updated so the only additional task to provide a working set of jobs to developers is to update the SVN locations and credentials. The entire process takes about an hour.

Our original Hudson server was running Linux and did all processing for Linux-based jobs. Windows jobs were processed on VirtualBox “Virtual Machines” that were configured as Hudson nodes running on this same server.

As our processing load increased we started to use standalone PCs as slaves that were configured as Hudson nodes. We soon realized that this gave us more flexibility to increase processing power. Our slaves started out as low-end 64-bit PCs with a minimum of 4 GB of RAM. We installed Windows or Linux, as appropriate.

When we reevaluated our server needs we decided that we should focus on a machine with a large amount of reliable storage (Raid 10). Disk and processor speed were secondary although we still have a dual hex core machine with 32 GB of RAM. The server was configured with 7,200 RPM drives based on price and effective throughput on a gigabit switch. Our entire build environment is on its own switch to facilitate fast transfer of artifacts between the master and slaves

We have all processing done on slaves and use the server to run Hudson and store artifacts. This allowed us to spend less money on a server and extend its life by not requiring a server upgrade as our processing needs increase.

We also decided that our slaves will be relatively inexpensive “off the shelf” PCs that can be purchased and brought online quickly. The current configuration for a slave is a Dell PC with an Intel Core i7 processor, 32 GB of RAM and dual SSD drives. (Except for our increasing the RAM to 32 GB this is one of the standard Dell configurations.)

We decided that using a cloud solution like Amazon’s Elastic Compute Cloud (EC2) is not going to work for us at this time because of the large amounts of data we need to move to and from slaves.

Examples of the amount of data we would need to transfer include:

On average, we move more than 80 GB of data to and from our slaves every day for our standard nightly build of our main Hudson project (including branches).

This does not include additional weekly jobs we run or build flows for our other products.

We also made the decision to run all of our jobs on VirtualBox VMs on these slaves rather than directly on the machines.

This helps us in several ways:

VMs allow us to have more test environments than we have machines. Our products support all active versions of Windows (currently about 7) and several versions of Linux (currently 4 primary versions). With the use of VMs and multi-configuration jobs we can quickly change our job configurations to run on any variety of operating systems. It is critical to us to have this flexibility as we find differences in behavior between Windows and Linux and between versions of Windows and Linux. These differences used to be found through manual testing or by customers; now we find most of them during our automated test processes.

Our primary Hudson job runs approximately 5,000 unique tests nightly. This does not include the other products we have migrated to Hudson. Since we run the same tests on multiple operating systems we are running more than 13,500 tests nightly and the number is growing. Test creation and resulting test results are an integral part of our development process. At this point, a build without accompanying test results is considered almost useless.

We currently have 15 slaves. By the end of 2015 we’re planning to have approximately 18 slaves. Each slave runs 3 to 6 VMs so by the end of the year we will have a total of about 80 Hudson nodes.

We are currently evaluating using a cloud solution like Amazon’s Elastic Compute Cloud (EC2) to augment our slave farm to provide flexibility to add capacity and redundancy.

The product that is currently using the most Hudson resources generates artifacts of between 250mb – 500mb. Since we support Windows, Mac and Linux a particular job might generate upwards of 5 GB of archived artifacts. With nightly builds, installers and ISO generation we generate approximately 20 GB of archived artifacts nightly. This number will be increasing as we migrate all of our builds to Hudson, support more versions of our products and have more developer branches. For builds, we keep a history of 10 to 20 jobs. For test jobs, we keep a history of 90 days to allow us to track test count and success / failure trends. This does not include promoted builds that are kept indefinitely.

Our newest product required an updated interface to one of our existing products. Because of the move to Hudson, all of jobs are now associated with teams. So the steps involved to support this new team were to simply:

All development work for this updated interface was done in the branch and all builds and test jobs were run against the branch using the new team job set until all test results matched our trunk.

At this point the branch was merged back into trunk.

The result was one test failure.

A traditional code merge from a branch into trunk usually results in compilation and testing errors that can take days to resolve. This results in disruptions to developers not involved in the branch development.

This major refactoring was done without any disruption to the developers still working against our trunk. After the successful code merge the team and its jobs were deleted.

The Hudson development team has been extremely responsive to product improvements as well as any reported bugs.

The product improvement that most affected our product development cycle and made Hudson the clear choice for our company is the “team” concept that allows multiple versions of the same product to be developed quickly and simultaneously. This solved our problem of being able to effectively build and test these multiple product versions. It also provides greater visibility, which has greatly improved our development velocity.

Our “Success Story” is just one of many.

Before we implemented Hudson our development process was based on creating a build when we thought we needed it and then manually tested the build.

Hudson has proven to be an invaluable part of our development processes. Migrating to Hudson has helped Cleo evolve its software development process from a traditional waterfall methodology to a flexible agile environment. We are now able to deliver significantly higher quality software across development sub-teams, our product testing group and, most importantly, to our customers.

This page was last modified 12:35, 8 April 2016 by Duncan Mills. Based on work by Stuart Lorber and Winston Prakash.