The Henshin profiler offers different visualizations especially for the matching process of Henshin transformation rules. We use the example Ecore2Rdb to explain how to invoke the profiler and what information is displayed. We have changed the transformation rule CreateTableInterrelations in such a way that we have named the nodes to be able to identified them in the visualizations of the profiler (the picture shows only a part of the rule CreateTableInterrelations). 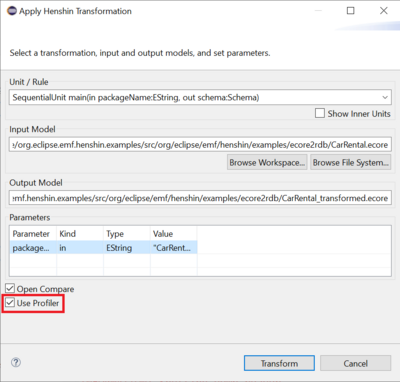 To call the profiler via the API, a PerformanceMonitorImpl-object must be created and passed to the method execute(ApplicationMonitor monitor). After all transformations are finished, the method showVisualizations() of the PerformanceMonitorImpl-object must be called to start the analysis and to open the GUI. showVisualizations() also terminates the monitoring. Since the terminated monitoring cannot be used to monitor further transformations, one should always ensure that showVisualizations() is called at the end. The following code shows an excerpt from Ecore2Rdb.java, which was modified to call the profiler via the API. To execute the modified code the class Ecore2Rdb must import org.eclipse.emf.henshin.monitoring.kieker.monitoring.PerformanceMonitorImpl and the two dependencies org.eclipse.emf.henshin.monitoring.kieker and org.eclipse.emf.henshin.monitoring.ui must be added to the MANIFEST.MF.

The Profiler offers four different visualizations, which are explained below. 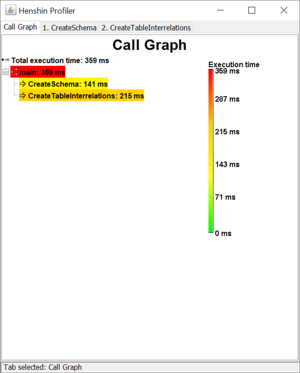 For our example we see that the unit main took 359ms and called the two rules CreateSchema and CreateTableInterrelations. 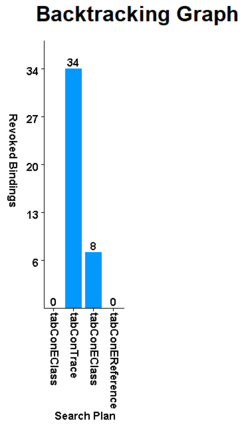 For the execution of CreateTableInterrelations one can see that for the node tabConTrace 34 times a binding was found, which was then revoked. This also hints that 34 times all available candidates for node tabConEClass were examined to see that none of them matches. 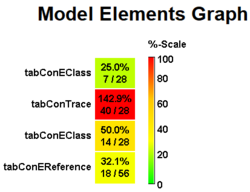 The Candidates Graph shows detailed information about a rule execution. Information: The Candidates Graph shows how bindings found during the transformation execution influence the possible candidates of the remaining nodes on average. X-axis: The x-axis at the top shows from left to right the order of the nodes of the LHS as determined by the search plan. Y-axis: The y-axis on the right side shows from top to bottom the changes per binding found. Rectangle: The label indicates how many candidates are available on average. This number also determines the color of the rectangle using the heat scale. To interpret the information correctly, this visualization must be interpreted row by row. The first row of rectangles (row 0) indicates how many candidates are contained in the input model at the beginning of the transformation execution. The next row (row 1) indicates how many candidates are available on average for the remaining nodes after a binding for tabConEClass has been found. The next row (row 2) shows what is happening after bindings for tabConEClass and tabConTrace were found, and so on. 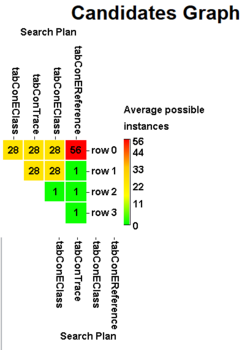