This document is tentative and subject to change without notice.

The Helios release will introduce system level support for JSF 2.0.  This includes updates to:

New JSF 2.0 concepts to be supported by the system are:

Based on lessons learned over almost five years of experience with the JSF project as both committers and adopters, we have come to some conclusions about the limitations of our current bundling architecture with respect to adoption.  These are based on the following premises:

This leads us to the following observations about adoption of the JSF Tools Project:

Based on this analysis, we propose to change the bundling and system architecture in the following ways to improve adoptability:

The JSF feature is divided as follows:

JSF Core: All of the base functionailty required to support JSF tooling.  This feature will not expose any UI by default although it may contain resuable UI components.

Exemplary Features: All of the extensions and metadata required to extend JSF Core into basic exemplary features except for Faces Config Editor and Page Designer.

Faces Config Editor: The editor implementation.  Some of the reusable UI components such as artifact creation wizards will remain in JSF Core.

Page Designer (already exists): Of the plug-ins required for the WPE.

The following services will be made factory configurable:

The metadata and JSF app config frameworks both use similar but distinct locator concepts used to create an aggregation of artifacts from disparate sources.  We will centralize the concept of the locator in this release.  The conceptual design is as follows: 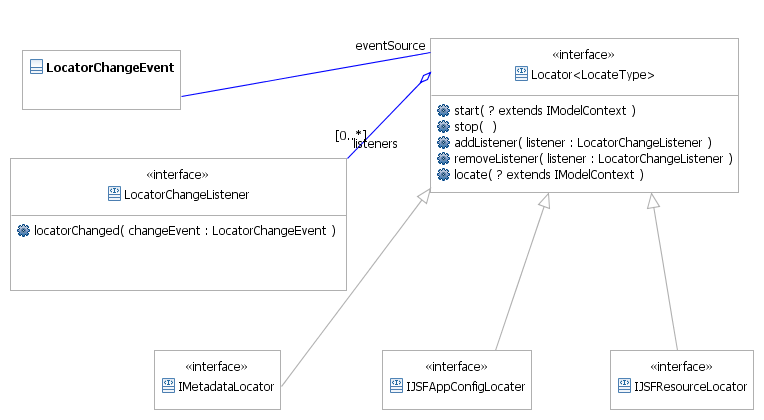 The Locator interface is parameterized based on the type of object that is returned.  Each locator also has following capabilities by default:

As shown, the existing metadata and app config locators will be refactored to be of this type.  Existing API will be deprecated but preserved where applicable.  The IJSFResourceLocator is also shown.

The general use of a locator is as follows: 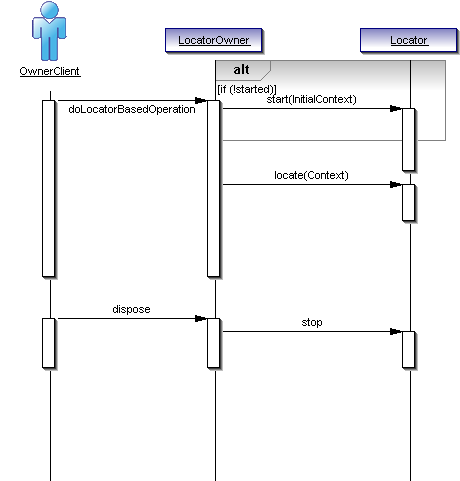 JSF Resource Locators are a new concept introduced by JSF 2.0 that are used to find application resources at runtime.  JSF Tools will support design time APIs for finding resource-locatable artifacts in a JSF project based on the algorithm described in the spec section 2.6.  Resources may be:

An API will be defined that takes a String of the form:

and parses into it's parts. The parser will include a validation step that can identify deviations from the specification that would cause the resource to be ignored at runtime per 2.6.1.3.

An API will be defined that can be queried by resource identifier and returns available resource libraries in the search path for resource.  The query mechanism will simulate the algorithm described in 2.6.1.4.

The resource handler that converts resource identifiers into resources is pluggable. The framework will allow ToolDeveloper to replace the default resource handler with a custom one to match what is registered in an application.

Because of the performance intensity of these locators, the application configuration manager will not be configured to use these by default.

The application configuration model will updated to handle all of the new app config file artifacts (XML elements) added in JSF 2.0.

All EMF objects representing Faces Config nodes will be made sub-classes of a new super-class that holds information pointing back to the source of the data.  The information will include:

New meta-data will be added to support component tree construction from Facelet tags.

Support for the view facet that defines "render targets". This is necessary to be aware of components that are added relative h:head and h:body tags.

The design time view root will have a new API method that can be used to get a list of all component ids in the view including the option to map back to the component/tag that uses the id. This method must be optimized for runtime performance since it is intended to be used by real time user features such as content assist.

A new tag registry will be added to support Facelet VDL tags.  This includes locating tag libraries in both the web.xml configured locations and in composite components.  Additionally, implicitly defined libraries must also be located in the jsf runtime.

A new implementation of Locator will be defined for the purpose of finding these libraries.

New API will be created to directly get and set context param and other web.xml-specific options for JSF.

The EL framework will modified to support:

A new content type will defined for the XHTML files containing default Facelet view definitions.  A content describer will be implemented to discover of a file containing XHTML content is in fact a Facelet file.  The algorithm may consider the current Facet installed on the owning project and/or defining user data in the project such as the presence of a WEB-INF/faces-config.xml or certain jars on the classpath.

New metadata is needed to cover off the new tags and attributes for existing tags in the h and f libraries:

<Gerry TODO: add list of new tags and new attributes on existing tags and discuss what metadata will be added for both>

JSF 2.0 introduces two new standard tag libraries: "ui" for standard Facelet page building and "composite" for defining custom components on the fly. The following metadata is needed for these libraries:

<Gerry TODO: add a list of all new tags and discuss what metadata will be added for each>