This Wiki presents the architecture of EMF Refactor and summarizes the components used by it. Each tool in EMF Refactor is based on the Eclipse Modeling Framework [1,2], i.e., each tool can be used for arbitrary models whose meta models are instances of EMF Ecore, for example domain-specific languages, common languages like UML2 (we refer to UML2 being the standard EMF-based representation of UML2, i.e., org.eclipse.emf.uml2.uml) used by Eclipse Papyrus [3] and the Java EMF model used by JaMoPP [4] and MoDisco [5, 6], or even Ecore instance models themselves.

EMF Refactor mainly consists of six components out of two dimensions: With respect to the main functionalities (calculating model metrics, detecting smells, and executing refactorings) there is an application module for each. Similarly there are three specification modules for generating metrics, smell, and refactoring plugins containing Java code that can be used by the corresponding application module. For simplicity reasons, we refer to these plugins as custom QA plugins in the following. We start with a description of the specification dimension.

The following figure shows the architecture of a specification module using a UML component model. 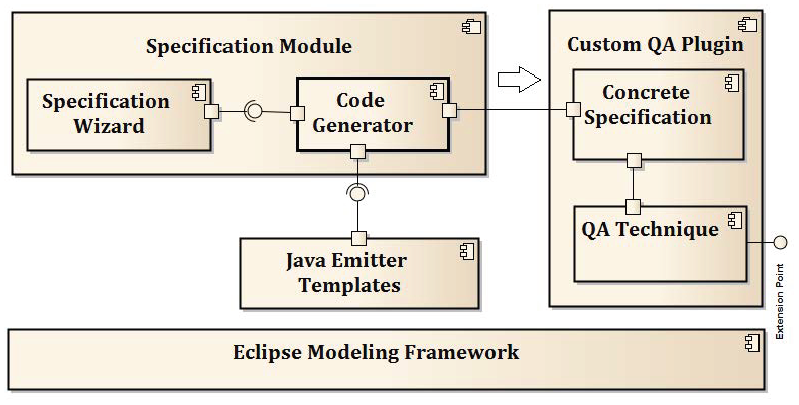 The specification module provides the generation of custom QA plugins containing the metric-, smell-, or refactoring-specific Java code. Using the Eclipse plugin technology, libraries consisting of model quality assurance techniques can be provided. So, already implemented techniques can be reused.

More concretely, the following techniques can be used in a concrete specification of a new EMF model metric, smell, or refactoring:

The specification module provides wizard-based specification processes (component Specification Wizard in the figure above). After inserting specific information (like the name of the metric, smell, or refactoring, and the corresponding meta model) the Code Generator component uses the Java Emitter Templates framework [12] to generate the specific Java code required by the corresponding extension point (see arrow in the figure above). The following table shows the extension point descriptions for EMF model metrics, smells, and refactorings. 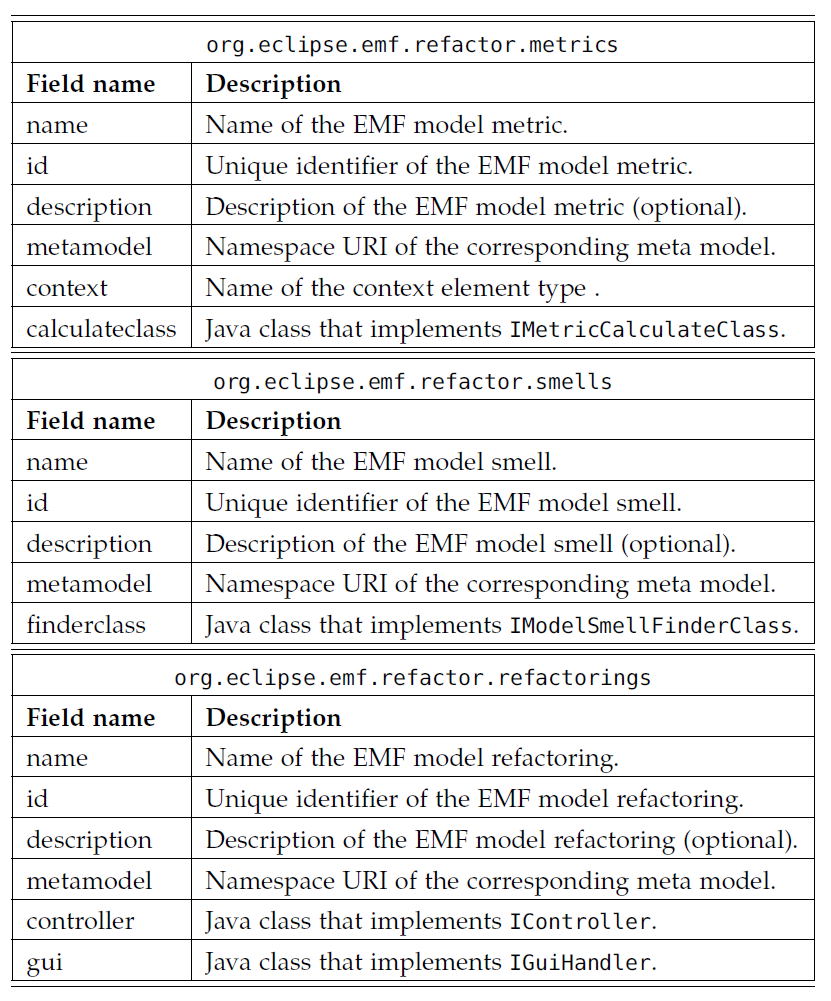 Besides basic information like the name, id, or the corresponding meta model of a concrete model quality assurance technique the following interfaces have to be implemented:

The following figure shows the architecture of an application module. 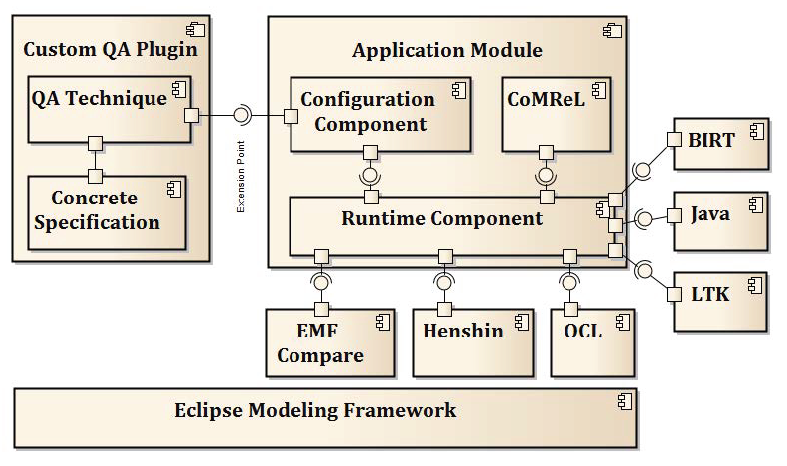 It uses the Java code of the custom QA plugins generated by the corresponding specification module and consists of two components. The Configuration Component maintains project-specific configurations of metrics, smells, and refactorings. The Runtime Component is responsible for metrics calculation, smell detection, and refactoring execution. Depending on the concrete specification approach, the runtime component uses the appropriate components Java, OCL, Henshin, or the internal CoMReL interpreter. Further languages, especially model transformation languages like EWL [14,15], may be integrated by suitable adapters [16]. For exporting calculated model metrics, the reporting engine BIRT [17] is used. Finally, the Language Toolkit (LTK) [13] is used for homogeneous refactoring execution and EMF Compare [18], a tool that provides comparison and merge facility for any kind of EMF models, for refactoring preview.