The last EGit version that uses Java 1.8 and that can be installed on Eclipse platforms as old as Neon.3 is EGit 5.13. There will be no new features in the EGit 5.x series. 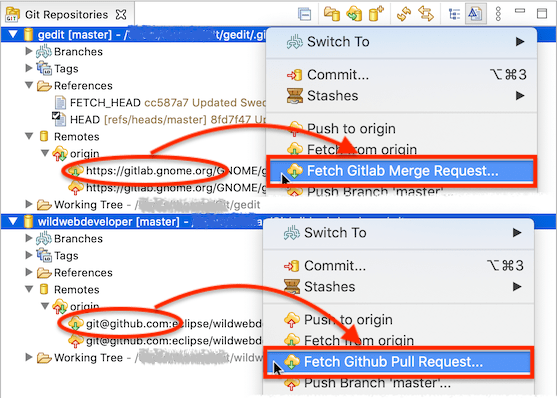 The command is also available in the Team→Remote sub-menu of the context menu in other views, for instance in the Package Explorer on Eclipse projects from a git repository managed by EGit. 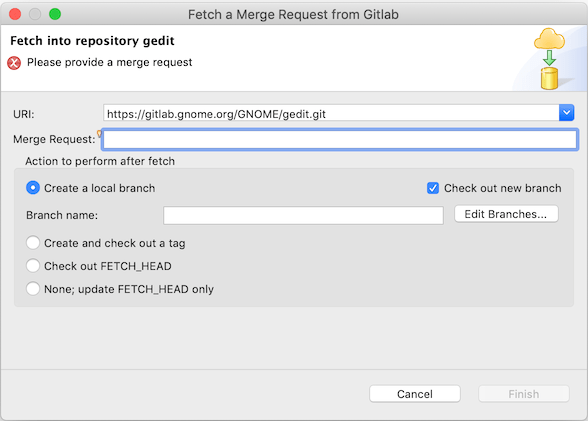 Opening the dialog first, then copying the pull request number or web URL and pasting it into the dialog's input field also works.

EGit uses the normal git mechanisms for fetching pull requests; it does not use the REST APIs Github or Gitlab offer. It cannot know automatically whether a particular remote refers to a Github or Gitlab host: there is no API in the git protocols to detect what kind of server one connects to. EGit needs to know because the two kinds of servers publish pull requests slightly differently. 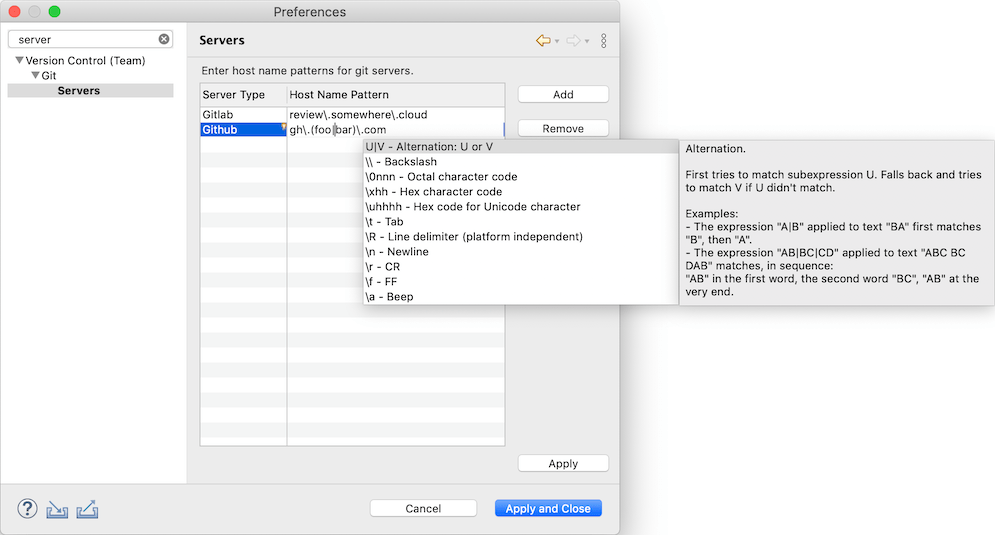 On this preference page one can define host name patterns and associate them with a git server type ("Github" or "Gitlab"). The fields in the table are editable. Patterns are Java regular expressions matching host names; during editing content assist giving hints about the regular expression syntax is available.

For Github, users also have the option to install the GitHub Mylyn connector, which uses the Github REST API and which provides a different and richer UI. With the Github Mylyn connector, define a "task repository" of type Github/Pull Requests and create a query for open PRs. To fetch a pull request, open it from the Mylyn Tasks view, then click the "Fetch commits from PR" icon top right in the PR editor.

EGit 6.0 uses an SSH2 agent, if one is running, in SSH public-key authentication. On Windows, EGit supports Pageant, the SSH agent of PuTTY; on other operating systems it uses a Unix domain socket given via environment variable SSH_AUTH_SOCK, which is the normal mechanism used e.g. by the OpenSSH agent.

Use of an SSH agent can be switched on or off globally in EGit 6.0 via a new preference:

By default, this setting is switched on.

The EGit feature is completely independent of the agent settings in Preferences→General→Network Connections→SSH2.

Some directives in the ~/.ssh/config file are not handled yet:

Support for these is planned for a future version as it needs upstream changes in the Apache MINA sshd library used by EGit and JGit for SSH communication.

Integration with a native keychain (the UseKeychain directive on Mac) is not supported.

EGit does not do agent forwarding. Use the ProxyJump directive in ~/.ssh/config instead.

EGit 6.0 includes some less noticeable improvements in the UI, plus a number of bug fixes. The complete list of new features and bug fixes is available in the release notes.

The following 2 developers worked on this release:

You can see the UI changes in action in the Eclipse 2021-12 Java IDE Improvements video.

This page was last modified 15:17, 6 January 2022 by Thomas Wolf. Based on work by Holger Voormann and Matthias Sohn.