The main EGit preference page has two new preferences: one for enabling parallel pull and one for selecting the SSH client library to use. 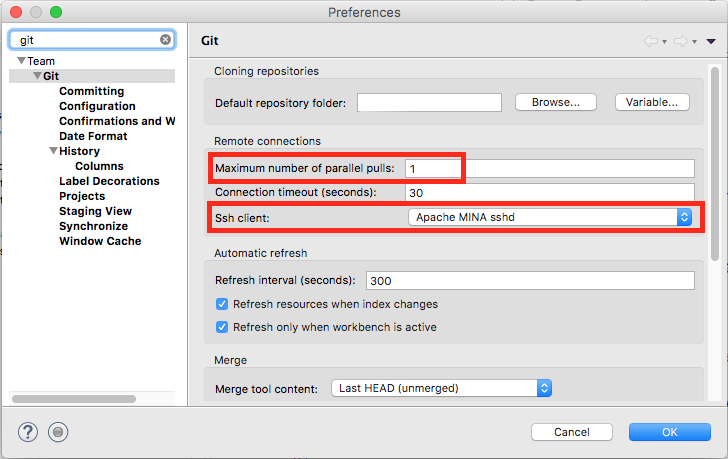 You can choose which library to use in the main EGit preferences page, and we encourage you to switch to the new Apache MINA sshd. Benefits for now are that more kinds of SSH keys work: ECDSA-384 and ECDSA-521 keys work, and ed25519 keys now also work! It also properly reads private key files generated by modern OpenSSH (or older OpenSSH ssh-keygen -o), if they are not password-protected. Encrypted new-style OpenSSH private keys are not supported by Apache MINA sshd yet. Keys in the older PEM format are read fine.

There is no support yet for ssh-agent or for Pageant with the new SSH library.

The previously existing mechanism for using an external SSH executable by setting the GIT_SSH environment variable is still available.

Support for reading encrypted OpenSSH keys is on the roadmap for the next EGit 5.3.0 release. We plan to remove the old JSch SSH implementation completely in a future release of EGit.

You can now switch to a common branch in several repositories at once. 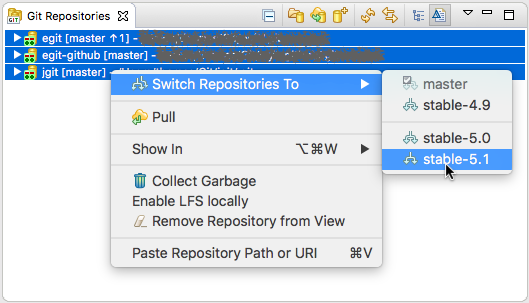 When there are several repositories selected, the context menu entry "Switch Repositories To" allows you to do a branch switch in all of them. The sub-menu proposes the local branches that have the same name in all of the selected repositories. When you select a branch, EGit checks out that branch in all those repositories. If some check-outs cannot be done successfully, for instance because of conflicts in some repositories, a dialog will be presented showing which repositories were switched and which ones not.

EGit 5.2.0 includes lots of less noticeable improvements in the UI, such as icons for menu items, using verbs instead of "OK" for dialog buttons, and so on, plus a number of bug fixes. Find the complete list of new features and bug fixes in the release notes.