Please refer to the IEventBroker API described on bug 288999. This is now part of Eclipse4.

What is the Problem with Events?

The current event processing in Eclipse is centered on the listener mechanism (also commonly described as the "Observer" pattern). This is a good, relatively simple, and easily customizable approach. However, two drawbacks became apparent as its usage grew: forced lifecycle and multiple implementations.

The "multiple implementations" problem is another aspect that grows with the software size. Even as parts of the pattern are provided by the Platform (ListenerList, SafeRunnable, Job), there is still code that needs to be added by every event generator to tie them together. From a memory consumption angle, every event provider has to instantiate and maintain its own listener list, even if, as often happens, nobody is listening or the particular event does not happen. A quick search shows over 200 places in the SDK code alone that create ListenerList's. Chances are, there are as many listener mechanisms that have their own implementations or use ListenerList indirectly.

Is there a way to solve the problem?

Yes. There is a different event processing pattern commonly referred to as the "publish/subscribe" approach. 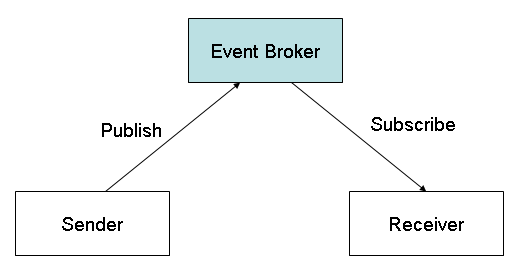 The main difference is that an intermediary is introduced between the sender and the receiver: events are published to the Event Broker which dispatches them to the listeners subscribed to this event type.

In this approach listeners can subscribe and unsubscribe as they please, regardless if the particular event source exists. It means that there is one implementation that everybody can use without the need to write additional code. It also means that no extra processing will be done for events that do not happen. And we'll have no need for multitude of listener interfaces specific to each event.

So, is this the best thing since sliced bread? Well, it does have some downsides. The event broker becomes a rather sensitive point of the system. It has to perform well both in CPU timing and memory allocations. And the broker itself better be robust.

Not surprisingly, there are lots of different implementations of the "publish/subscribe" pattern. They range from more basic, like the OSGi's EventAdmin, to full blown enterprise scale implementations with support for event persistence and redundancy.

What kind of implementation we need for Eclipse SDK?

Out of scope, unless somebody provides patches:

There are some wrinkles around the implementation, but most of them are of the normal "solvable" types. One big reservation comes from the fact that it has to conform to the OSGi spec.

Consider this specific problem in conforming to the spec: in the Event Admin, every single event needs to have a Map added to it. And it can't be null or an empty Map either, as the spec says that it includes the event's topic name.

After some experimenting I found that actual memory churn added by the EventAdmin is not too bad. In absolute numbers, its dispatch times were in the range of about 10 micro seconds per event for the expected load. Garbage collection was fine on long runs, probably adding an extra minor GC every 15 seconds, with the total GC time not affected in a measurable way.

The extra memory allocated by Event's data was about 60 bytes per event. Interestingly, depending on which profiler data we were to believe, the amount of memory allocated per Event in the EventAdmin processing was somewhere between 100 bytes (good) and 4Kbytes (hmm...). I was not able to track this down as the profiler I used consistently crashed when asked to explore this spot, probably due to the size of data being in the hundreds of thousands.

(Performance numbers were measured on "nothing special" WinXP system with 2Ghz CPU and 4Gb of RAM.)

It seems that, for the expected load, extra memory allocation by the EventAdmin won't create measurable slowdowns. That said, I am still uncomfortable with the need to create Map's when most events will only be passing a single Object.

There is no question that Eclipse outgrew the listener mechanism and is ready for the "publish/subscribe" approach. Even more interesting possibilities will open up if we consider its combination with contexts and data injection.

As for the implementation, we have two feasible choices: build based on the existing Equinox OSGi's EventAdmin implementation, or start from scratch. My choice would be to try to use EventAdmin adding parallel APIs in the Equinox namespace and changing its implementation to be optimized for the Eclipse SDK use while continuing to support OSGi's spec.