This document defines a set of rampdown cycles for DTP 1.6. The goal is to ensure that DTP stability and completeness converges on the 1.6 release dates, while allowing mechanisms for changes as necessary. Since this document is about the rampdown, only cycles post DTP 1.6RC0 will be detailed below.

Since DTP 1.6 uses map files, committers can continue to deliver changes to CVS HEAD, and such changes are not automatically included in the build. Thus, this process concerns approved updates to the map files and hence changes to the code delivered by DTP 1.6. Given that any plug-in might need to be changed during the end game, the DTP PMC discourages substantial changes being released to CVS HEAD, which could then complicate the process of promoting only tightly constrained changes to the DTP 1.6 release stream through the map files.

A period of testing during which no changes are made to the DTP code line, unless approved by the PMC. Nightly builds will not be produced during this pass. In general, we ask everyone in the DTP community to test the target build as thoroughly as possible.

A Testing Pass including bug fixes based on the approval policies described below. Nightly build will be produced during this period as necessary to make bug fixes available to the DTP community. 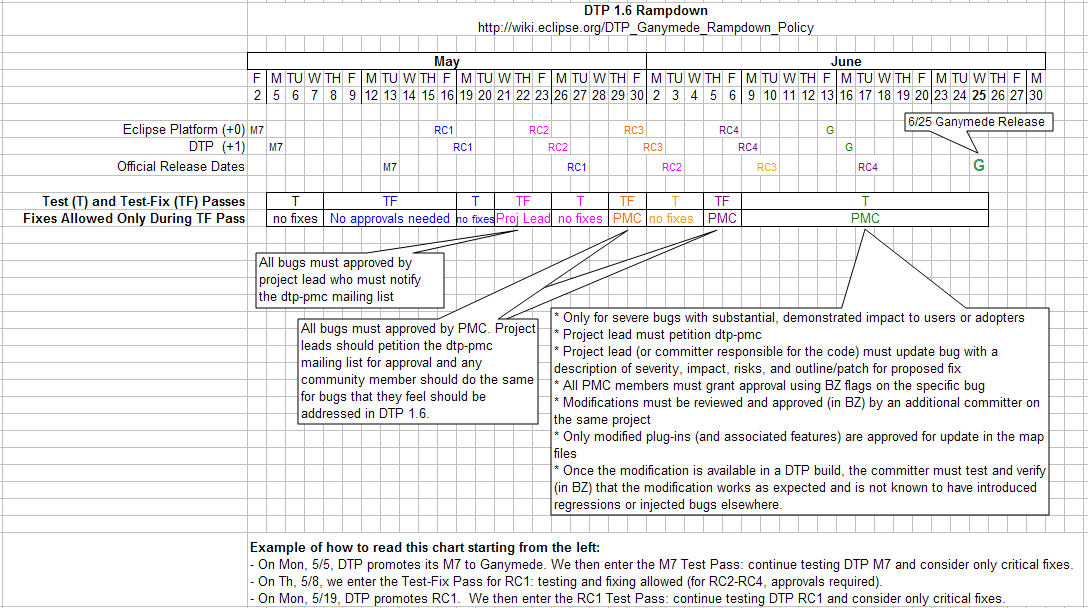 Additional RC builds will be scheduled as necessary.

This page was last modified 16:52, 7 May 2008 by Linda Chan. Based on work by Brian Fitzpatrick, John Graham and John Graham.