A vocabulary to describe contexts. Imported by Persona vocabulary. 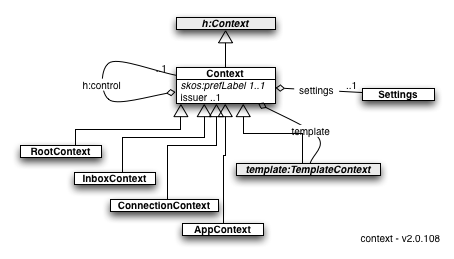 A context that provides storage for an add-on app to the portal, a built-in app-like functionality in the portal (e.g. the all-about-me editor app), or an HBX add-on (e.g. dynamically loaded JavaScript app).

Special "inbox" context that is used to receive notifications from other ADS user accounts. Only one inbox context per ADS user.

A tagging subclass indicating that this context is the "root" context for this user. There should only be one instance of RootContext for each user.

A class to hold setting information for the containing context. Settings are the user's preferences for how to interact with the containing context, as opposed to pure data held by the context. It is expected that contexts that have specific settings will attach them as attributes to an instance of Settings (or some subclass thereof).

The entity (e.g. a business) that defines this context: defines the schema used, defines the meaning of the attributes of the schema, defines the interaction context withing which these attributes gain values. The issuer is often, but not necessarily the entity that makes the attribute value assertions (claims). If the issuer is Equifax, then indeed Equifax is making the claim that the "bearer" of this context is, say, over 21 years of age. As a counter example, the issuer of a context might be Facebook. In this case the values are asserted by the Facebook user, yet Facebook is considered the issuer. This is a required attribute of all Contexts.

A singleton instance of the Settings class.

A link to a TemplateContext that acts as a template for this context.