This document proposes an enhanced (considerably re-worked, actually) dialog for Working Set Configurations. I would like to contribute a patch for the 6.0 release, before M7.

CDT 5.0 provides support for working-set configurations. These provide a means to easily change the active build configurations of the C/C++ projects in a working set to some consistent selection. The current UI has a number of deficiencies of usability and function, and is not extensible to handle rich build-configuration models such as may be defined by custom project natures (usually derived from the C nature).

Current state of the art

The current working-set configuration support contributes a Configs for Working set action to the Build Configurations sub-menu of the Project menu. Invoking this action brings up the following dialog: 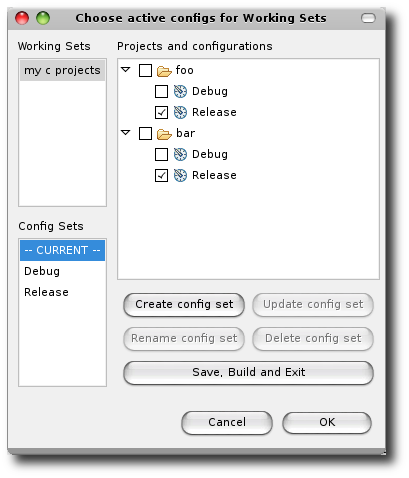 This dialog has several functional and usability problems:

The menu action would be renamed to Manage Working Sets... (note the ellipsis indicating a dialog. I would have liked Manage Working Set Configurations..., but it seems to be too long; GNOME, at least, truncates it) and the dialog reworked to look like this: 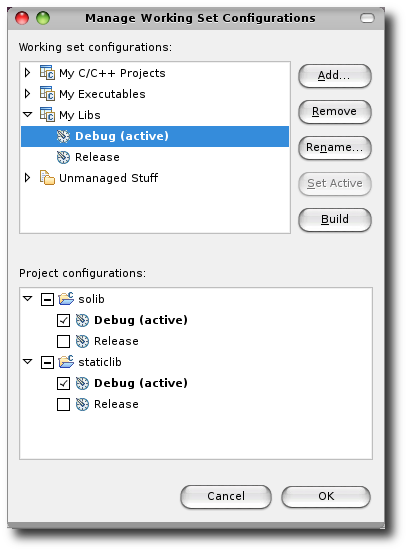 To address specifically the problems with the current dialog:

The context menu contributions for working sets look like:

This should be self-explanatory. These menu actions are available only on working sets that include at least one CDT project (implemented by a new property-tester in the expressions framework). 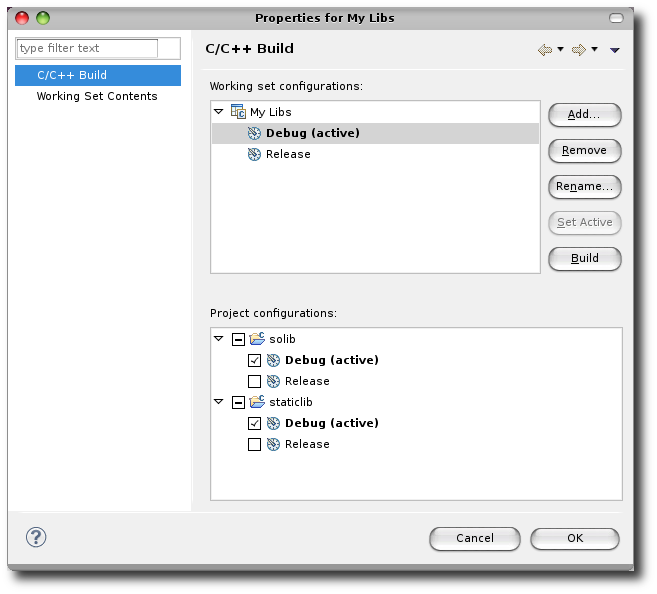 This provides the same capabilities as the Manage Working Set Configurations dialog (see above), but scoped to the selected working set.

The Eclipse workbench keeps track of recently used working sets. In the CDT context, a working set is "used" when its configurations are edited and/or set active.

Here, we see three recent working sets (in order from most to least recently used) with sub-menus permitting selection of a configuration to build or to set active in the workspace. For working sets that do not define any configurations, they do not show a sub-menu, but can be selected to build whatever configurations are current for the contained projects (an example is the Unmanaged Stuff item).

The dialog and the menu are driven by a common data model, which implements the IPersistable protocol for saving workbench settings between sessions. The model also follows the example of the Launch Configurations model and others in the platform, providing a read-only view with working copies for modification. The working set configuration model calls these snapshots in order to avoid repetition of the term "working" in names, especially as the semantics are different.

The data model is maintained by a WorkingSetConfigurationManager. It is responsible for:

The WorkspaceSnapshot, in providing a frozen view of the CDT configuration of every project, makes it easy for implementors of the IWorkingSetProjectConfiguration interface to access their nature-specific configuration data and to compare the current working copy against this original state. This facility is used, for example, by the dialog to determine whether all of the project configurations specified by a working set configuration are currently "active" or not, and which projects have changed and thus need a re-build. The workspace snapshot tracks project configurations using ProjectStates, which can be plugged in by nature providers to implement their specific tests for whether a project needs to be built.

A new extension point is defined, org.eclipse.cdt.ui.workingSetConfigurations, by which the providers of custom project natures (usually extending the core CDT nature) can plug in support for their extended build configuration metadata. This extension point registers implementations of an interface IWorkingSetProjectConfigurationFactory against specific project natures. This factory creates, for the provider's projects:

The basic fitness of this extensibility scheme is demonstrated by two out-of-the-box implementations:

The intention, this late in the CDT 6.0 release cycle (i.e., M7), is to leave all of this new API, including the extension point, as internal.

For traceability, this proposal is cross-referenced to bugzilla: