SWT has been developed as a light-weight library to establish rich java GUI programmes, but there still are some popular features that current widget does not have. For example,the combo box widget still does not support an image item or a mix(image and text).Actually,there are many aspects for basic SWT widgets to be enhanced. Here, my work is just to add some basic and popular features to some widgets in SWT or Nebula.

Enhance some basic widgets in SWT or Nebula

I have found that there are two ways of implements such an extended combobox widget. The following are two web page links about method to implement such an enhanced combo box:

Enhancing the Combo-Widget with Images [1]

The first implementation is a good way to fulfil such a feature,in which it just make some modifications of combobox source code in SWT. It just replaces the List in ComboBox with a Table or CTable , so it's very simple and we do not need consider much about cross-platform problems.But what the problem is: the SWT group may not accept it because it is just a workaround to add this feature: a table to show a list, strange?.

The second way may be a good style that SWT group or at least Nebula group think it's a good idea .But there are many problems in it, of which the most import problem is the cross-platform problem because it is built on JNI(Java Native Access library) which depends on Windows native features.

The Grid widget is a spreadsheet/table component that offers features not currently found in the base SWT Table.It offers features like cell selection,column grouping,column spanning,row headers and so on,which are not currently supported in the base SWT Table.But this Nebula widget currently only supports column merging,but row merging not.So I think it would be a good idea to add this feature because it is a popular and very-often-used feature.(This idea comes from Ivar Meikas,who is my mentor in this google summer code.Then many thanks to him!)

There should be a widget control to input an ip address for SWT package,then I find it is just a bug which has been reported in Nebula.But I haven't found that somebody has fixed it.Inputting an ip address is a popular and often used functionality,so I'll try to fix it.

I badly want to implement this enhanced widget with the second method which Lukasz Milewski offered, but I can not get response from him. So, I have to give up this idea and do my other things.

I have submitted my patch to fix this bug. If anyone want to use an IP input feature within Java Interface, he can install this patch. There are still some defects in it and some places may need to enhance, so more feedbacks are welcome.

The enhanced Grid now can not only support column merging(it is called 'spanning' in Grid source), but also support row merging. So, more complex functionality such as a big spanning area, can be fulfiled. Thus, this widget can be used like a spreadsheet/table component more similarly.

The following is a snapshot of the usage of this enhanced widget: 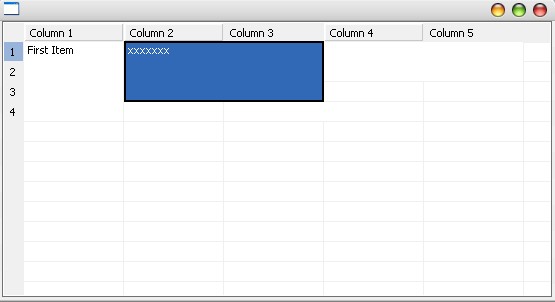 The code is hosted on google code. You can check out my code at [3]. More feedbacks are welcome.