A Rover comprehensive development and documentation is also given at Github with documentation and source repos. The APP4MC Rover is further developed along with the Eclipse Kuksa project. 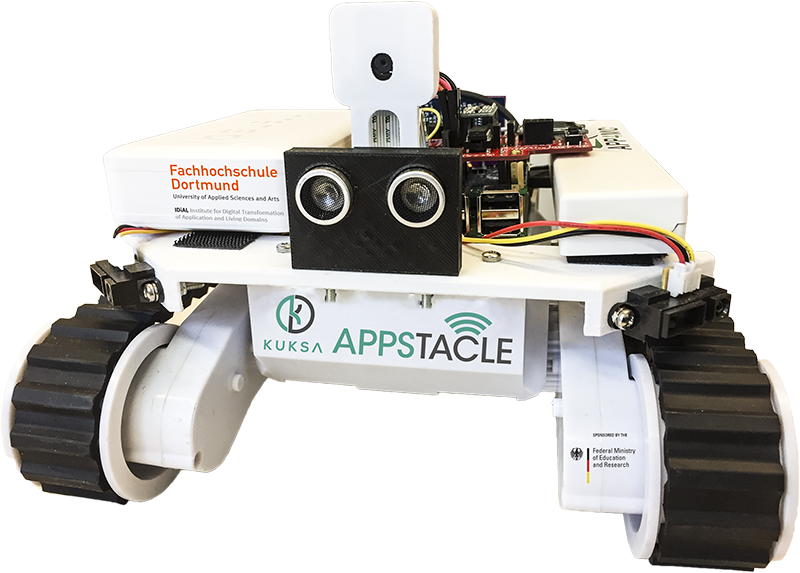 3D extensions, to be printed via a 3D printer, are provided >>> here <<< for attaching (a) 4 IR sensors, (b) 2 US sensors, and (c) the RPI camera. Future versions may include a battery and RPI3 holder in order to provide a more stable setup. Feel free to help us with that :-)

Since we do not focus the Rover's applications itself, we leave any implementations for sophisticated front and rear distance- or cardinal direction- measurements via additional or different sensors or any filtering algorithms to the community

Since the rover is a platform for testing soft- and hardware, it is still under construction. For this reason, some parts are only loosely mounted. If desired some parts can be glued for a tighter hold. You also can use Velcro. An additional source in the Rover hardware can be found in the rover-docs.

All parts of the rover are placed inside or onto the Rover 5 tracked chassis. Parts: 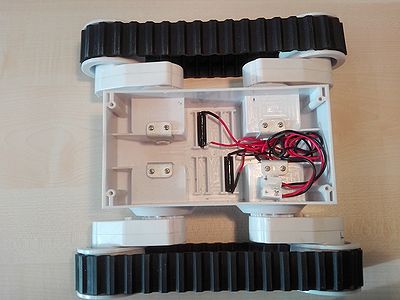 Mount the Infrared and Ultrasonic sensors on the 3D printed front and rear platforms. Also mount the Camera onto the front platform. Use M.3 screws and nuts for that. For a better visual feedback on where the front and back is, both platforms were printed in different colors (white = front). 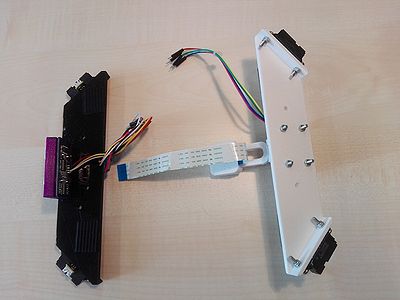 Place both platforms onto the chassis and tighten them with M.3 screws directly to the chassis. Since the forward and backward speed are identical, you have to decide which side will be the front. In this case we decided for the side on which the motors are placed. 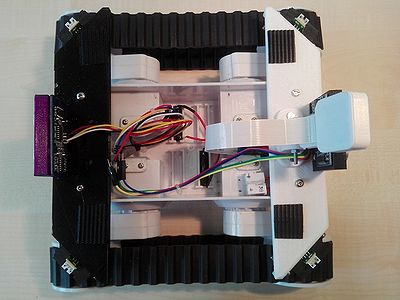 Optional: A circuit breaker can be added to the cables which power the Raspberry Pi and the motors. Therefore, the outputs are directly soldered to the breaker. Here, the breaker is placed in the USB cable towards the Pi (shown in the plan). 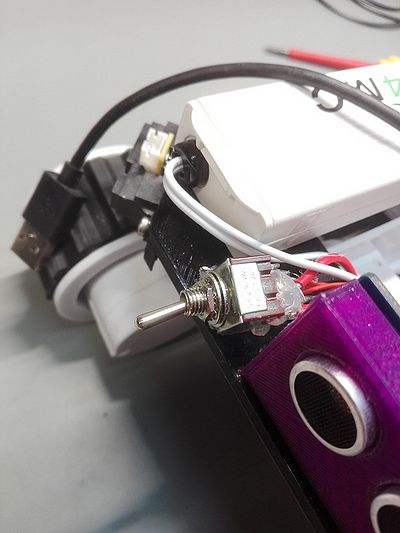 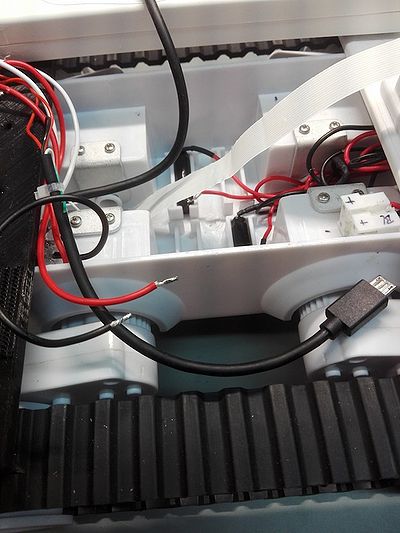 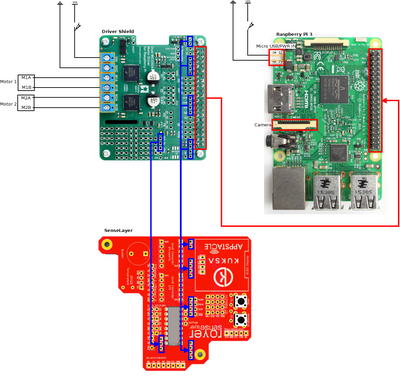 The intelligence-stack includes the RaspberryPi3, the motor shield, and the Sense-Layer. The three boards are connected on top of each other i.e.: 1. Sense-Layer (Top) 2. Motor Shield (Middle) 3. Raspberry PI3 (Bottom)

Assemble and solder (if not already done) all parts onto the Driver Shield and Rover Sense-Layer. For the Driver Shield follow the instructions that are shipped with it. You may need to solder additional male pin headers onto the shield (blue areas). 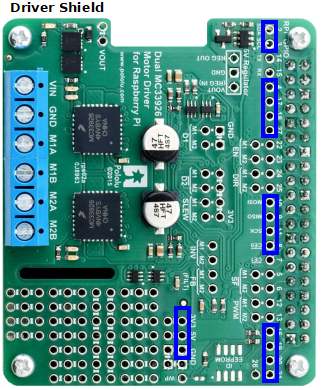 Solder all parts (from this list) onto the Sense-Layer. A soldering mask is printed on the board. The finished board should look like this: 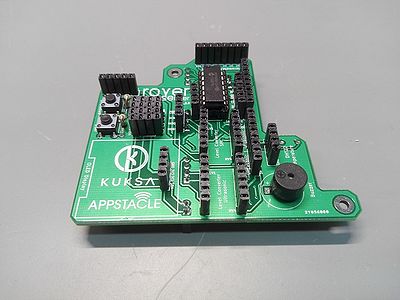 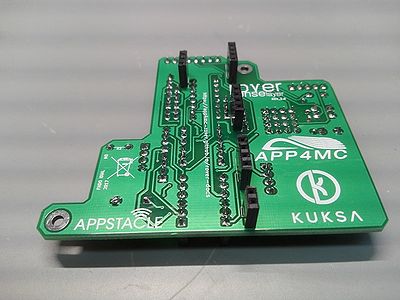 Put all three boards together (Raspberry Pi 3 <- Driver Shield <- Rover Sense-Layer). You may use spacers between the boards. The height depends on your pin heads. We use 10 mm spacers or none, as we often disassemble the stack. 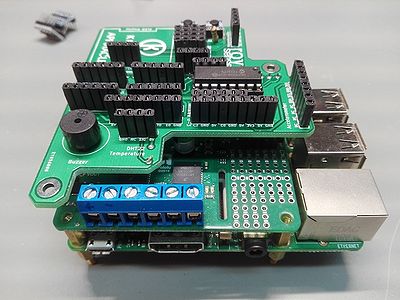 The Intelligence-Stack is loosely placed in the chassis. The power and motor cables are connected as shown in the quick wire guide. Do not forget to connect the camera as it may be difficult to reach the socket on the Pi later: 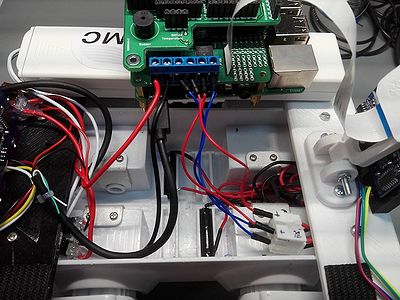 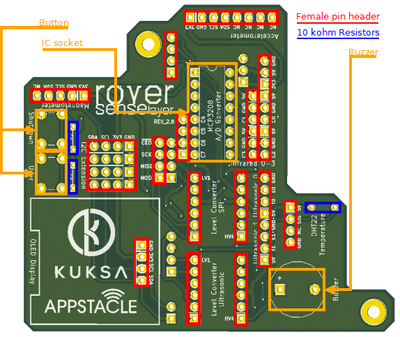 Connect all other sensors (Infrared, Ultrasonic, Temperature, …) as well as the logic-level-shifters, A/D converter and the display to the Sense-Layer: 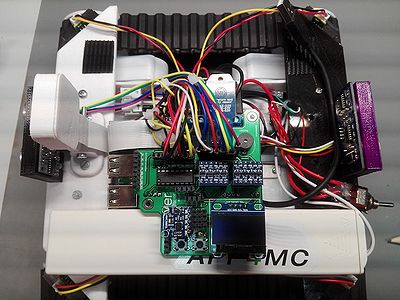 After adding the power bank and the voltage converter (set to 9V) and connecting the motors, and batteries the Rover is ready to go. 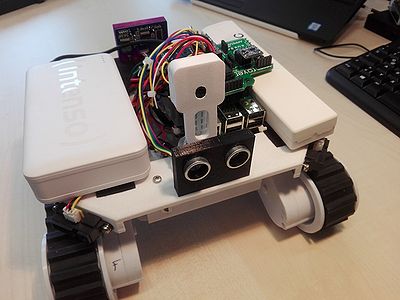 Flash your SD-card with the latest Kuksa-AGL-Image available at Repo Dortmund or build your own Kuksa-AGL image and start Hacking(thumbs up).

The Rover's wifi can be set up as an access point for a local setup, e.g. to use the Rover_Web_UI, or as a wifi client to connect to an existing network, e.g. to use the Rover_Telemetry_UI and exchange data with a cloud instance. For external communication a UMTS/LTE module should be used in the future. For lab setups it is also sufficient to use an additional Wi-Fi stick or the RJ45 connection on the Pi, to mock that connection.

This page was last modified 02:51, 13 April 2021 by Zack Glass. Based on work by Robert Hoettger, Joerg Tessmer and Harald Mackamul.