Design a service to ease management of SMILA records during workflow processing.

When to persist data into the a storage.

User:G.schmidt.brox.de: Several month ago we have had a discussion, how to persist information into the search index. At that time i proposed a configuration mechanism for controlling the storage/indexing processes when leaving BPEL. At that time we moved this discussion in the direction of using BPEL pipelets for e.g. indexing purposes because that way we are free to configure when and where to use this option. From my point of view such operations should be a general paradime. Either we use by default a configurable process for indexing/storage at the end of BPEL processing or we use pipelets for this case. Please share your thoughts.

Purpose of the Blackboard Service is the management of SMILA record data during processing in a SMILA component (Connectivity, Workflow Processor). The problem is that different processing engines could require different physical formats of the record data (see SMILA/Project Concepts/Data Model and XML representation for a discussion). Because this means either complex implementations of the logical data model or big data coversion problems, the idea is to keep the complete record data only on a "blackboard" which is not pushed through the workflow engine itself and to extract only a small "workflow object" from the blackboard to feed the workflow engine. This workflow object would contain only the part from the complete record data which the workflow engine needs for loop or branch conditions (and the record ID, of course). Thus it could be efficient enough to do the conversion between blackboard and workflow object before and after each workflow service invocation. As a side effect, the blackboard service could hide the handling of record persistence from the services to make service development easier.

This figure given an overview about how these services could be composed: 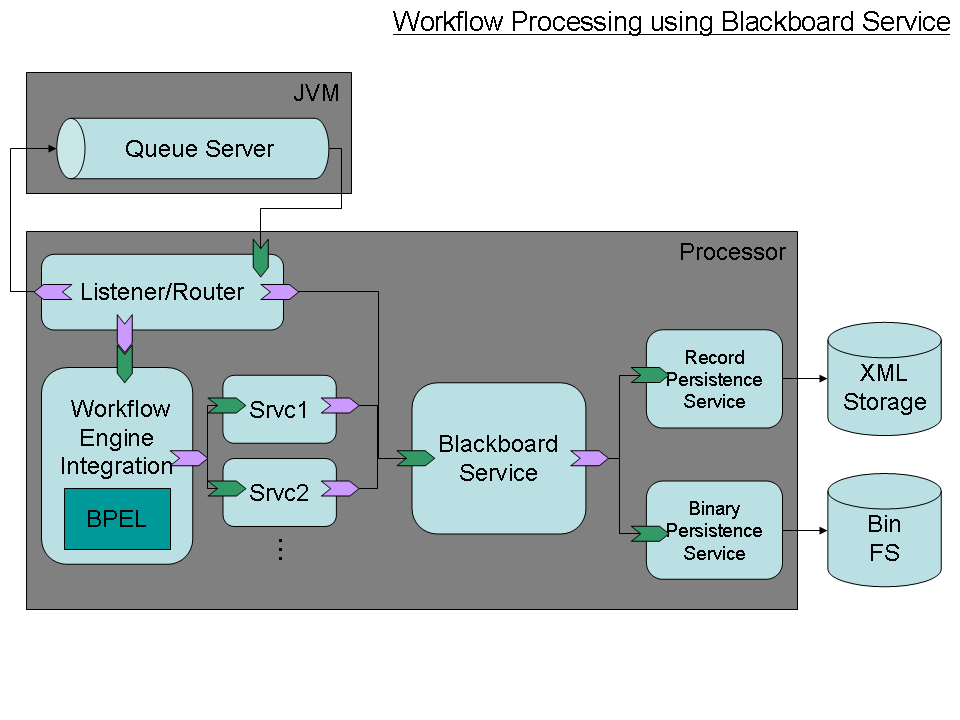 Note that the use of the Blackboard service is not restricted to workflow processing, but it can be also used in Connectivity to create the initial SMILA record from the data sent by Crawlers. This way the persistence services are hidden from Connectivity, too.

It is assumed that the workflow engine itself (which will be a third party product usually) must be embedded into SMILA using some wrapper that translates incoming calls to workflow specific objects and service invocations from the workflow into real SMILA service calls. At least with a BPEL engine like ODE it must be done this way. In the following this wrapper is called the Workflow Integration Service. This workflow integration service will also handle the necessary interaction between workflow engine and blackboard (see next section for details).

For ODE, the use of Tuscany SCA Java would simplify the development of this integration service because it could be based on the BPEL implementation type of Tuscany. However, in the first version we will create an SMILA specific workflow integration service for ODE that can only orchestrate SMILA pipelet because the Tuscany BPEL implementation type does not yet support service references (see this mail in the Tuscany user mailing list).

The next picture illustrates how and which data flows through this system: 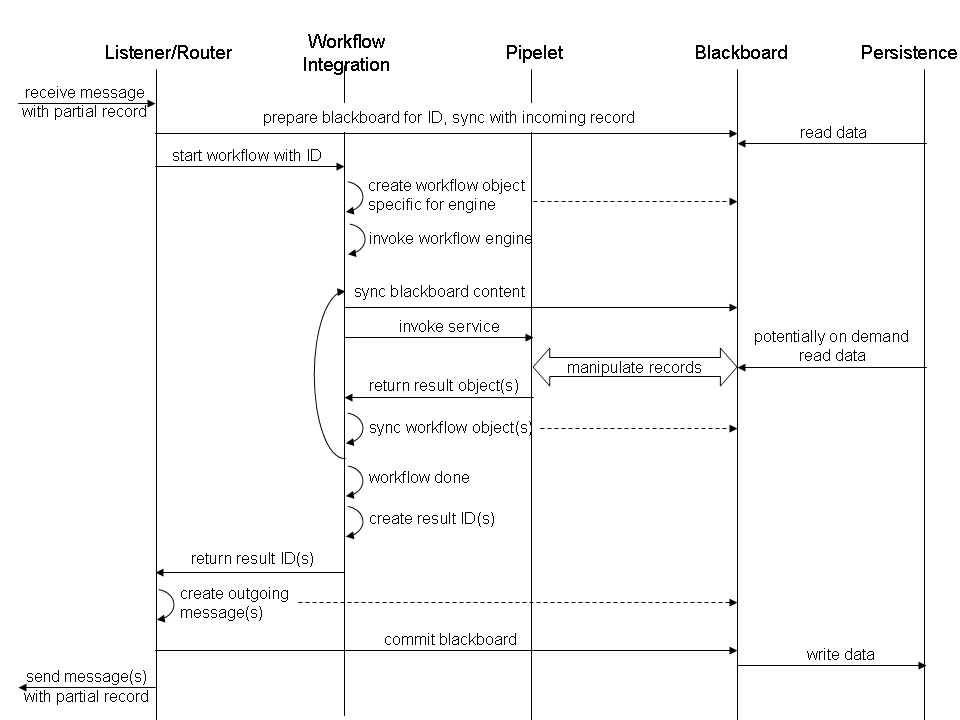 bq. The record usually contains only the ID. In special cases it could optionally include some small attribute values or annotations that could be used to control routing inside the message broker.

bq. If it finishes with an exception, instead of the following the Listener/Router has to invalidate the blackboard for all IDs related to the workflow such that they are not committed back to the storages, and also it has to signal the message broker that the received message has not been processed successfully such that the message broker can move it to the dead letter queue.

bq. Two things may need configuration here: When to create an outgoing message to which queue (never, always, depending on conditions of attribute values or annotations) - this could also be done in workflow by setting a "nextDestination" annotation for each record ID. And which attributes/annotations are to be included in the message record - if any.

Records enter the blackboard by one of the following operations:

All these methods should care about locking the record ID in the storages such that no second runtime process can try to manipulate the same record.

A record is removed from the blackboard with one of these operations:

The Blackboard will be implemented as an OSGi service. The interface could look similar to the following definition. It is getting quite big, so maybe it makes sense to divide it up into the different parts (handling of lifecycle, literal values, object values, annotation, notes, attachments?) for better readability? We'll see about this when implementing.

The business interface of a pipelet to be used in an SMILA workflow will be rather simple. It can get access to the local blackboard service using OSGi service lookup or by injection using OSGi Declarative Services. Therefore the main business method just needs to take a list of record IDs as an argument and return a new (or the same) list of IDs as the result. This is the same method that a workflow integration service needs to expose to the Listener/Router component, therefore it makes sense to use a common interface definition for both. This way it is possible to deploy processing runtimes with only a single pipelet without having to create dummy workflow definitions, because a pipelet can be wired up to the Listener/Router immediately. Becasue remote communication with separated pipelets (see below) will be implemented later pipelets (and therefore workflow integrations, too) must be implemented as OSGi services such that the remote communication can be coordinated using SCA. Thus, interfaces could look like this:

What about pipelets running in a separate VM?

We want to be able have pipelets running in separated VM if they are known to be unstable or non-terminating in error conditions. This can be supported by the blackboard service like this: 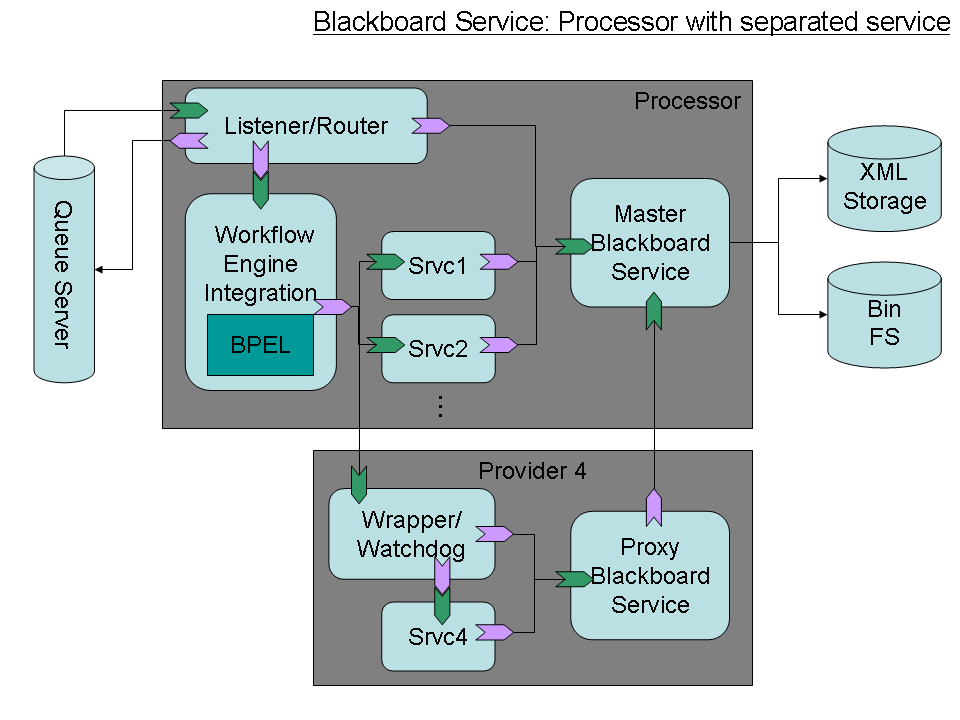