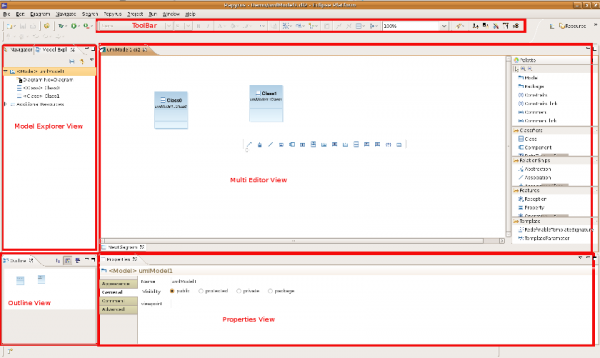 The model explorer is used to navigate to the all model's elements and the diagrams. 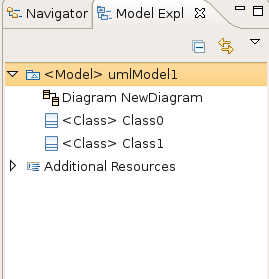 This action link the model explorer with the active diagram selection. This action works bidirectionally. 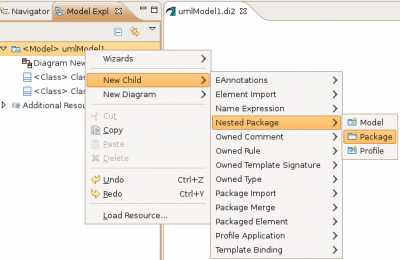 This action allow to add new diagram in current selection. 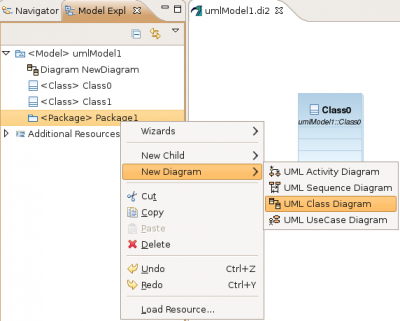 All actions are available on diagram item. 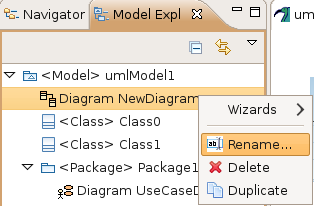 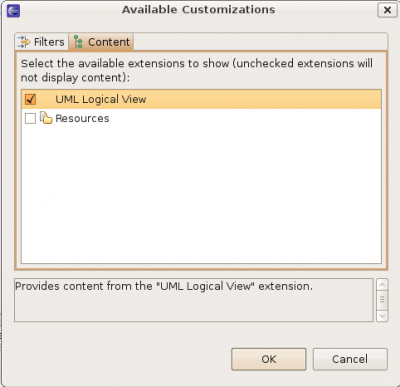 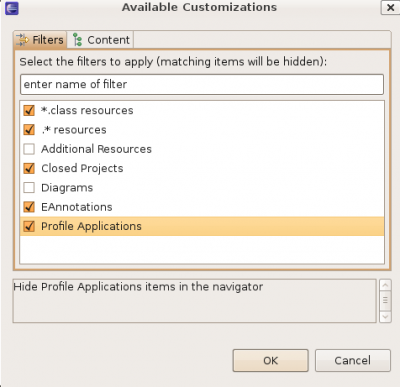 The Outline offers a thumbnail of the graphical representation and the list of semantic elements used in current diagram. 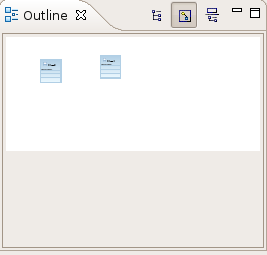 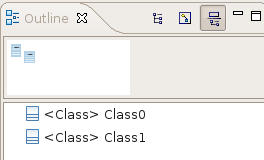 Tutorials on UML modeling with Papyrus

Choose the model file name and the first diagram to create. 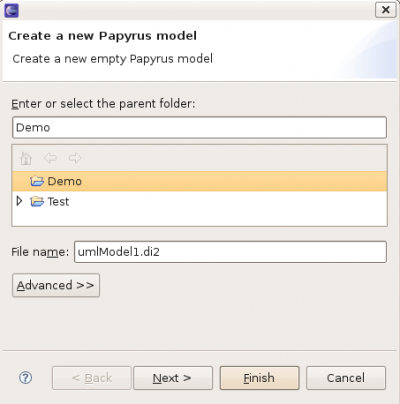 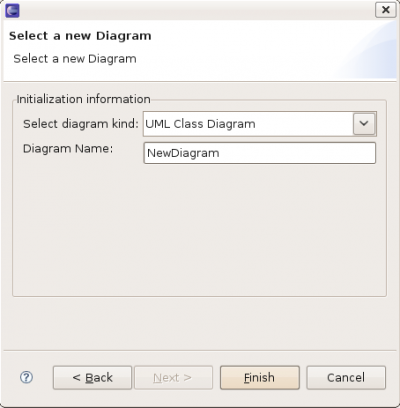 Create a diagram from an existing uml file

From your uml file, select the "Initialize Papyrus diagram" to access the creation wizard of Papyrus. Your Papyrus diagram will be linked with your existing model. 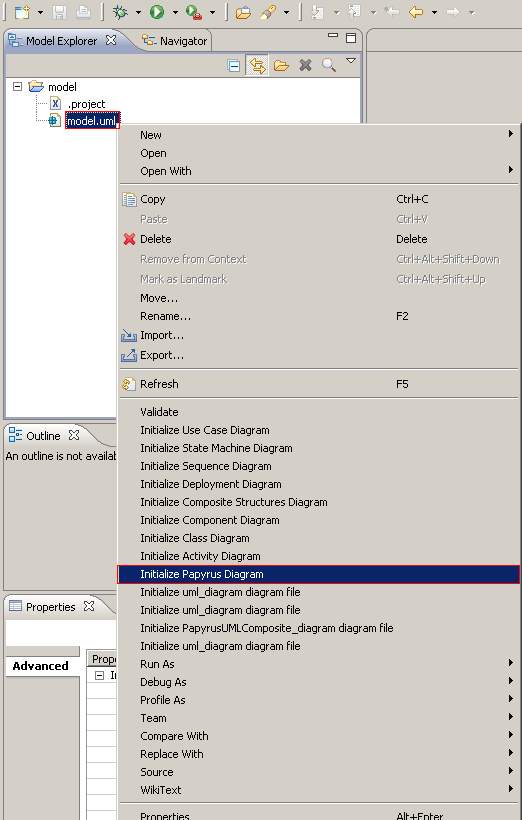 The palette is available with any diagrams. But its content depends on the diagrams type. The standard palette ( the top container of the palette in red in the here-after capture) contents a standard selection tool (the white arrow), a zoom in and zoom out tool, and marquee selection tools. 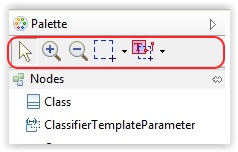 The standard palette is available for every diagram.

Papyrus has its own set of Toolbars. A Toolbar regroups a set of tools belonging to the same kind of activity. The different Toolbars can be shown or hide depending on the perspectives.
The toolbars visibility can be customized from the menu Windows/Customize Perspectives. 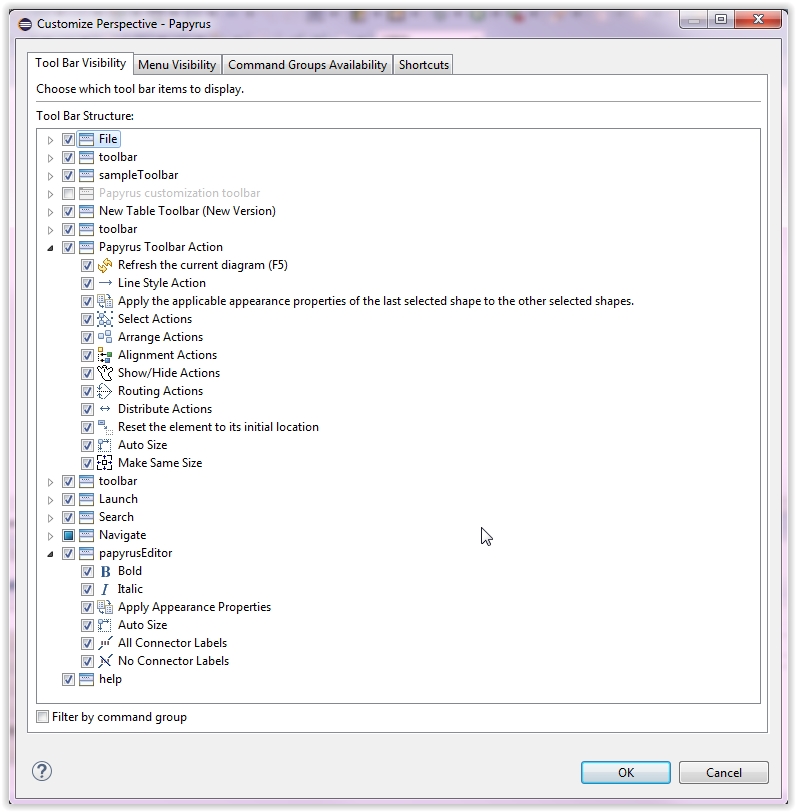 In order to customize the display of your diagram by using CSS, see CSS Stylesheets in Papyrus 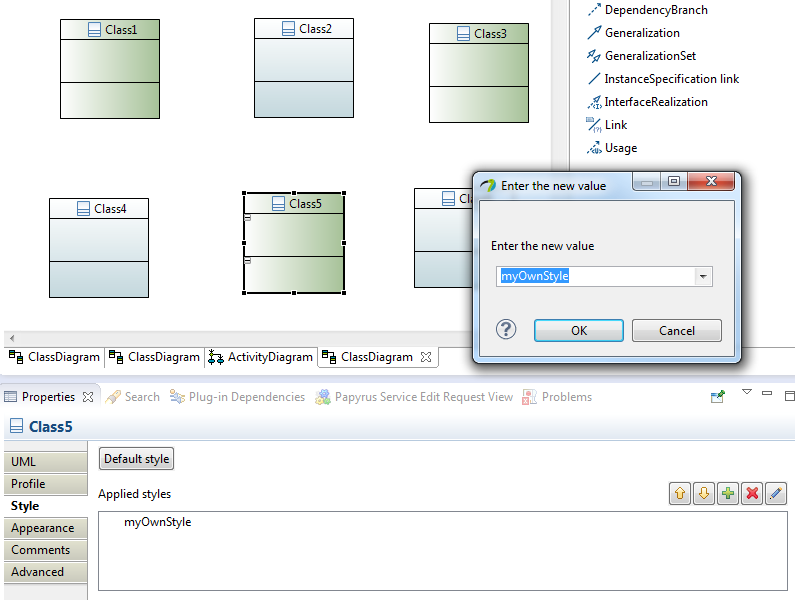 In order to edit your elements by using table representation,like the following picture, you can see Documentation about table

In order to edit your constraint in a profile as the following picture, you can see Create and edit constraints

To validate constraint on your model, you can see Define Profile Constraints

In order to edit stereotyped elements like in the following picture, you can see Display stereotypes 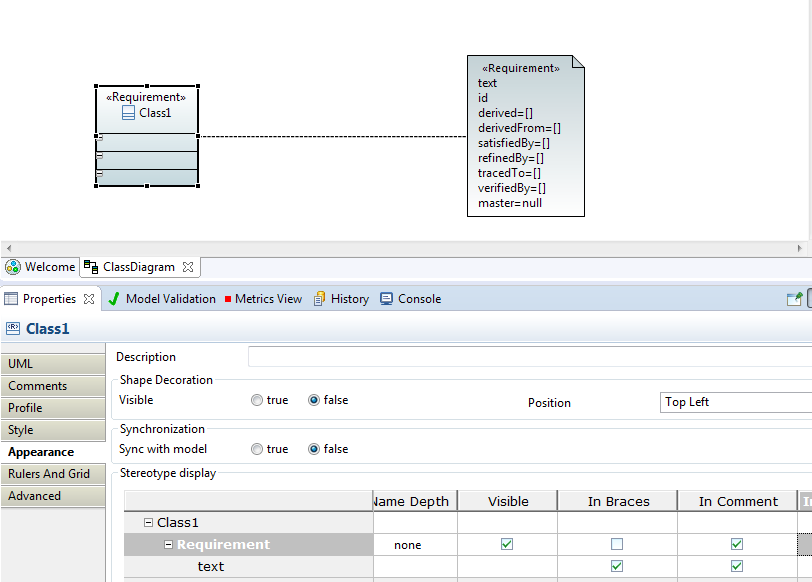 To use papyrus with SysML1.4 see https://www.eclipse.org/papyrus/components/sysml/0.8.0/user/index.html

In order to use fUML with papyrus as the following picture, see Using fUML and Alf to produce executable models

if you want to use layer, see Layers Guide

If you want to execute your model as the following picture, see Execute your fUML models with MOKA 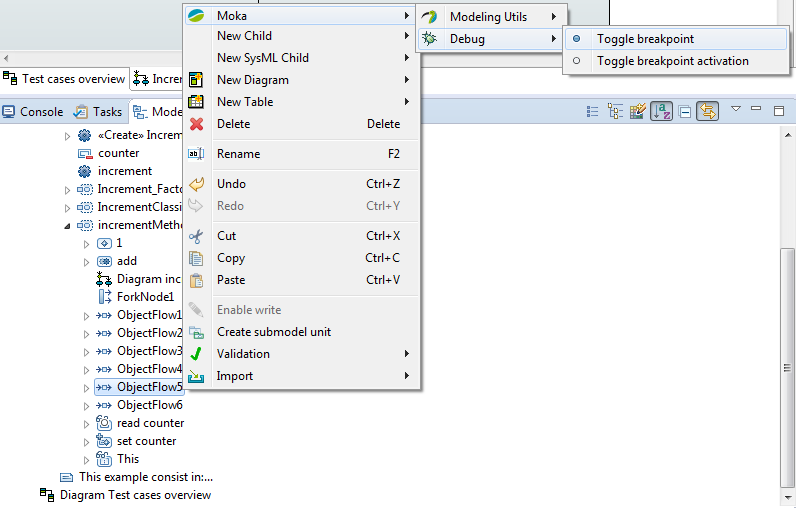 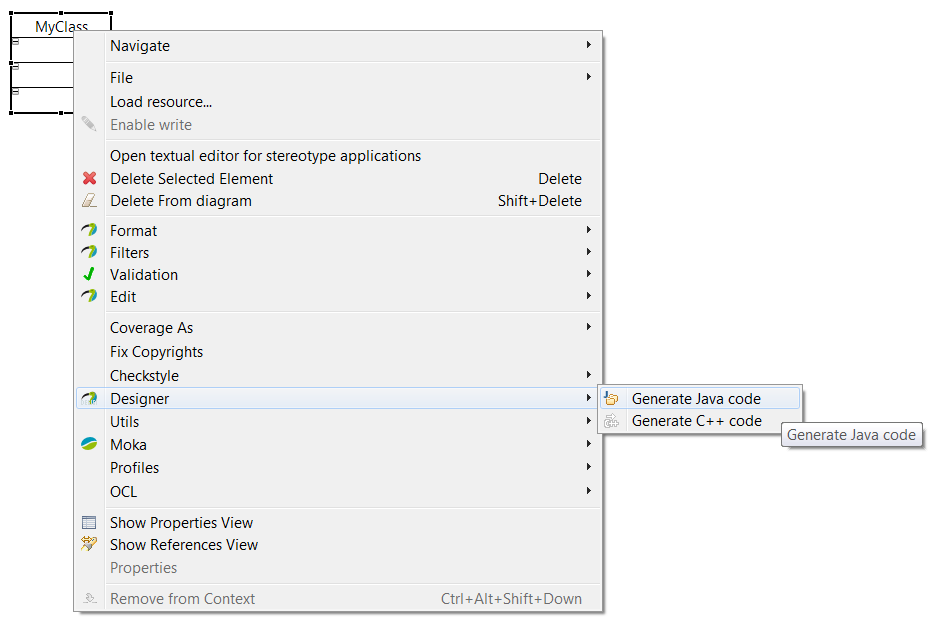 Apart from the aforementioned programming language, it is also possible to develop and integrate other code generators to Papyrus. To learn about how to add a new code generator to Papyrus, refer to the following wikipage.

In order to model your java code into UML, see Java reverse engineering 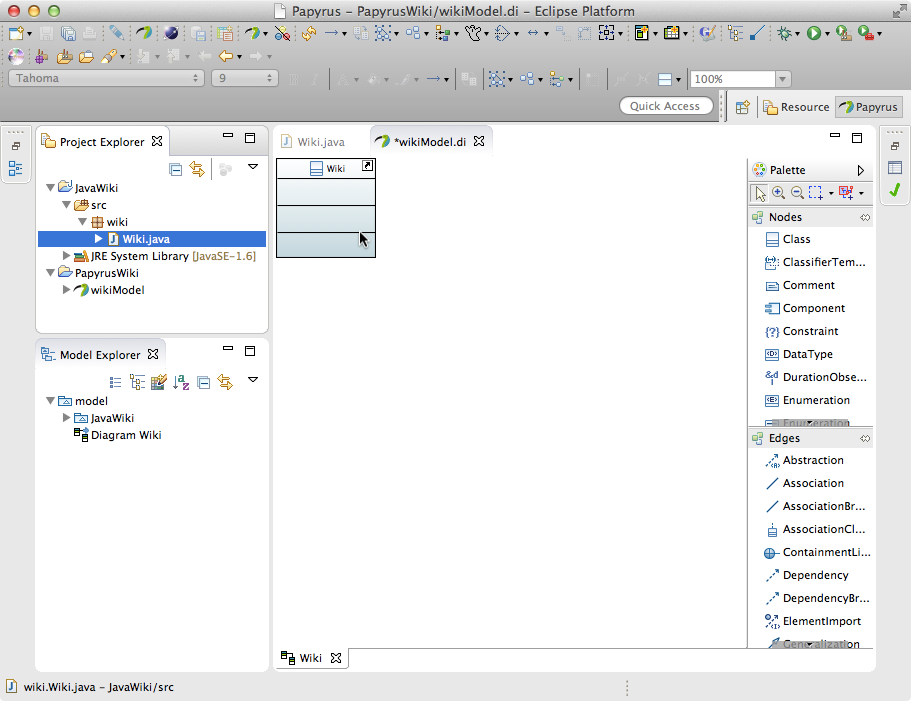 If your want to deploy an application, see Papyrus Software Designer

If you want to fragment your model by using Control Mode, see Submodel Guide 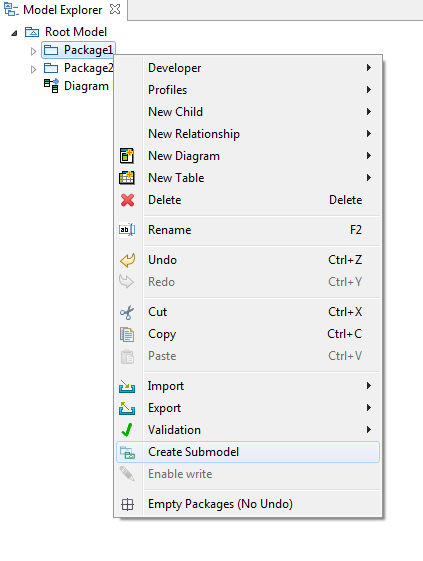 Papyrus provides embedded editors to edit UML Elements. Of course these editors allows to edit the name of the elements, but they allow to edit much more than this.

You can use this editors in Papyrus table or in papyrus Property View for example.

The developer documentation for this editors is available here.

The default grammar of the XText parser for the Value Specification is the following:

The values accepted for the differents attributes are the following:

If the text filled is not compatible with the grammar of XText parser, an OpaqueExpression will be created.

The XText parser reacts differently instead of the type of the Value Specification's container:

If the type of Value Specification's container is not defined, the default behaviour will be applied.

If the type of Value Specification's container is setted, the same text filled will be have different behaviour depending to the type. In fact, the value filled must be consistent to the type, otherwise an OpaqueExpression will be created.

The different types corresponding to LiteralSpecification are the following:

Since Papyrus 1.1.0 (Eclipse Mars), Papyrus provides a new texutal editor to edit references to UML NamedElement. This editor works only for references which are not in containment. This editor has not been developed using XText. It use a custom string parser and provide a completion (CTRL+SPACE) to help the user to find the named elements to reference in the model.

You can use this editor in Property View or in Papyrus table for example. Developer documentation is available here.

If you have 3 Classes in your model, named Class1, Class2 and Clas,s3.

The simple mode is represented as the following:

This editor must be filled by the following pattern:

The values set as lower and upper are always positive (except the * for the upper which is valued as -1).

The advanced mode with simple ValueSpecificatiton editors is represented as the following:

The lower and the upper ValueSpecification can be created/edited/deleted by the buttons:

The advanced mode with XText ValueSpecification editors is represented as the following:

This editor use the XText ValueSpecification editors (explain here) with some specificities depending on lower or upper value edition.

The specificity of the lower ValueSpecification edition is when the value filled is an integer, this one will be handled as LiteralInteger instead of LiteralUnlimitedNatural or LiteralInteger (the * value will create an OpaqueExpression).

The specificity of the upper ValueSpecification edition is when the value filled is an integer or *:

This is possible to switch between the two modes by two ways:

Regarless of the way used to switch modes, the mode used is saved in the preferences and will be used for each multiplicity in Papyrus.

Please visit the Installation steps of Papyrus for Requirements

This page was last modified 11:24, 10 September 2019 by Nicolas FAUVERGUE. Based on work by Quentin Le Menez, Benoit Maggi and Mauricio Alferez and others.