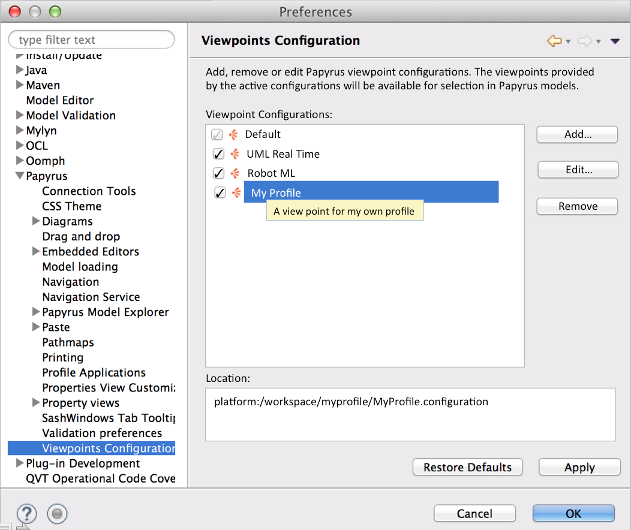 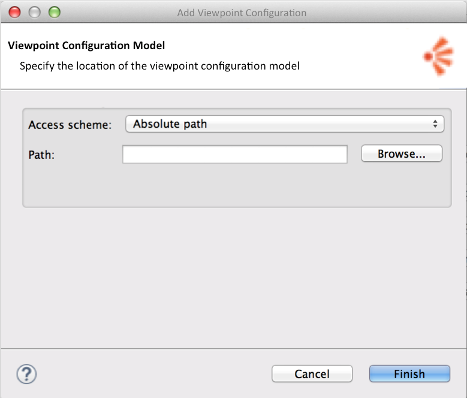 3. A 'Viewpoints Selection...' action will be contributed in multiple places in the workspace [REQ_001]. 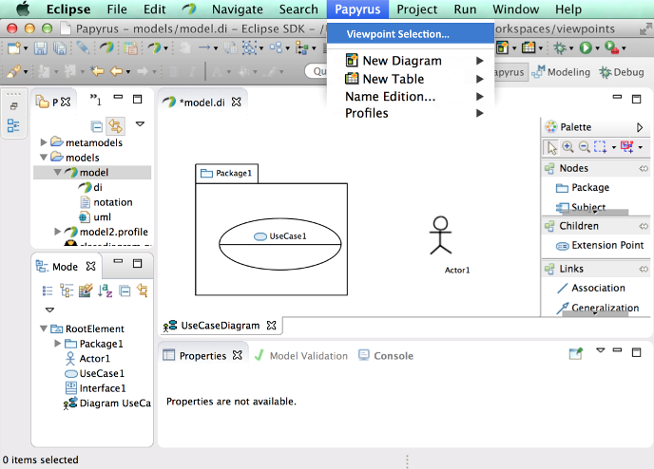 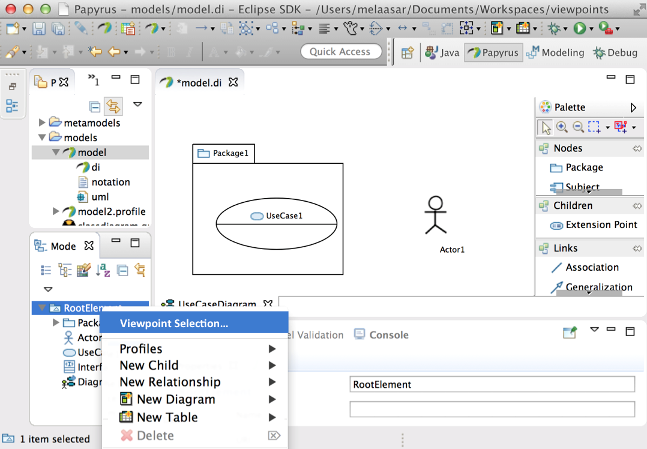 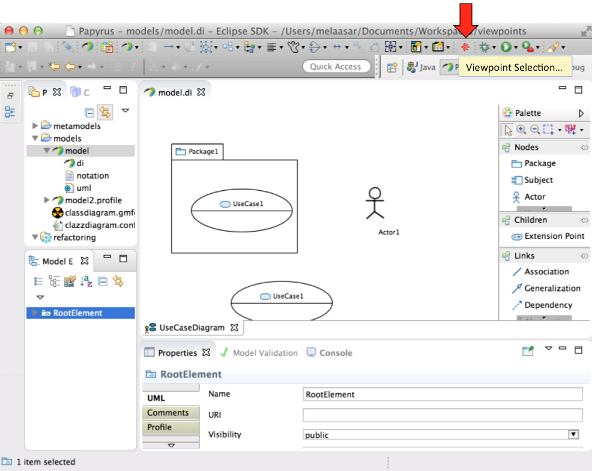 4. The 'Viewpoints Selection...' action will show a dialog to switch the viewpoint of the model. The dialog shows a list of available stakeholders (in a drop-down menu) and their viewpoints (in a list box) that are available from the selected viewpoint configurations in the preferences (a button to navigate to the preferences will be provided). It will also show the currently selected viewpoint. A user can select a new viewpoint from the list by choosing the 'Select' button. When this happens, the new viewpoint becomes active and its relevant changes take place in the model's editor and the relevant views in the workspace. 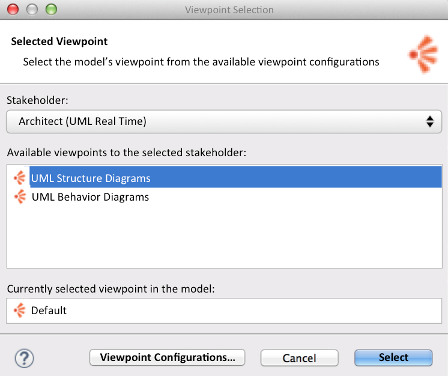 5. The Papyrus DI (.di) model will have a new optional reference to a viewpoint. This optional reference can be initialized from an added page in the New Papyrus model wizard. It can also be changed by the 'Viewpoints Selection..." action in point 3 above. If the reference is unset, the model's viewpoint is assumed to be the one provided by the Default configuration. [REQ_003] 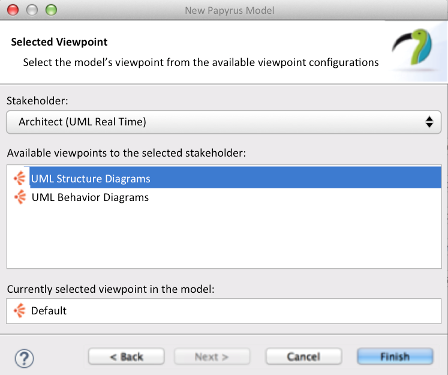 6. When a Papyrus model editor is opened (REQ_002) or receives focus (REQ_004), its model's viewpoint becomes active resulting in relevant changes to the editor and to the relevant views in the workbench. If the model's viewpoint is not resolvable, a warning will be displayed with an option to invoke the 'Viewpoints Selection...' dialog. [REQ_003]

Prior to Neon, The active Papyrus viewpoint in the workspace was selected in the preferences. In Neon, the active viewpoint is selected on a per model basis. The viewpoint preferences is where you choose one or more active viewpoint configurations (the platform deployed ones and/or workspace referenced ones). You can then choose a viewpoint for a given Papyrus model using its Viewpoint Selection dialog (available from the main menu, toolbar and popup menu). This is where you see the currently selected viewpoint, or choose a new one from a list of available ones (grouped by stakeholders) from the active configurations in the preferences. The selected viewpoint's name gets stored in a new object at the root of the DI resource of the model.

Out of the box in Neon, you will have the deployed viewpoint configurations (included the default configuration) activated by default. To change that, go to the Preferences->Papyrus->Viewpoint Configurations and deactivate some and activate others, including workspace referenced ones.

Older Papyrus models do not have a selected viewpoint, so the default viewpoint is assumed. To change that, use a model's Viewpoint Selection dialog.

A new class org.eclipse.papyrus.infra.viewpoints.preferences.ViewpointPreferncesManager has been introduced in Neon to manage all viewpoint preferences. The class's reload() API, invoked when the preferences are (re)applied, clears all related caches/registrations and reestablishes them based on the new preferences.

The org.eclipse.papyrus.infra.viewpoints.policy.PolicyChecker.getCurrent() was the API to access the currently selected viewpoint policy (configuration, viewpoint, stakeholder, etc.). Since such a policy is now per model in Neon, it has changed to the following:

i.e., you must pass now some context object to use to retrieve a policy that is specific to a given model (***)

To listen to changes to the definition of a viewpoint, you need to register a listener to the org.eclipse.papyrus.infra.viewpoints.preferences.ViewpointPreferncesManager class. The class notifies listeners when the preferences have been (re)applied, which may indicate changes to the viewpoint definition too.

The org.eclipse.papyrus.infra.services.edit.internal.context.TypeContext.getContext() API was used to get Papyrus's default context. It has been replaced by:

to get the context of the currently selected viewpoint in a Papyrus model. When no viewpoint is selected in a model, the default client context is returned. (***)

(***) This migration was done to Papyrus's core plugins in Neon. Third party plugins may need to perform similar migration.

This page was last modified 10:14, 2 June 2016 by florian noyrit. Based on work by Maged Elaasar and Sebastien Revol.