This document describes the design of an enhancement in the Neon release in which the synchronization of canonical diagram views with the model no longer relies on the drag-and-drop infrastructure.

In the Mars release, a new PapyrusCanonicalEditPolicy was introduced that replaces GMF's standard canonical edit policy (the EditPolicyRoles.CANONICAL_ROLE). The key design point of this policy was its delegation to the diagram's specific drag-and-drop policy to create views of existing elements. As indicated by bug 477384, this does have the side-effect of limiting the customizability of drag-and-drop in the diagrams. In particular, the canonical synchronization implemented by the CanonicalEditPolicy expects the drop edit policy to do nothing (or very little) more than create a view of an existing element. This restricts the amount of intelligent dropping of elements to create related new elements in various scenarios, without also going to lengths to constrain what kinds of elements the canonical edit policy will attempt to visualize.

Accordingly, the primary requirements for the Neon implementation of the canonical edit policy are:

The core issue addressed by the Mars design was that a generic edit policy such as the PapyrusCanonicalEditPolicy had no means to determine the specific visual element types (in particular, visual IDs) of the views that it needed to create for semantic elements in any given diagram. These specific element types are required to formulate the CreateRequests that ultimately are satisfied by the diagram's particular ViewProvider. The solution in the Mars release was to delegate to the diagram's generated DragDropEditPolicy by transforming CreateRequest to DropObjectsRequests (encapsulated in a wrapper to pass them through the customizable drop policy with its pluggable strategies, but that's a minor detail). This worked because each diagram actually substitutes a custom drop edit policy implementation that is specifically coded to be aware of the mapping of semantic element types to visual element types in each parent view that can visualize each semantic element within the context of the particular diagram.

Accordingly, the new design for Neon hoists this knowledge of the diagram's specific visual element types out of the drop edit policy and into a new GMF-style service that the generic PapyrusCanonicalEditPolicy can query to determine the visual element types that it should request. 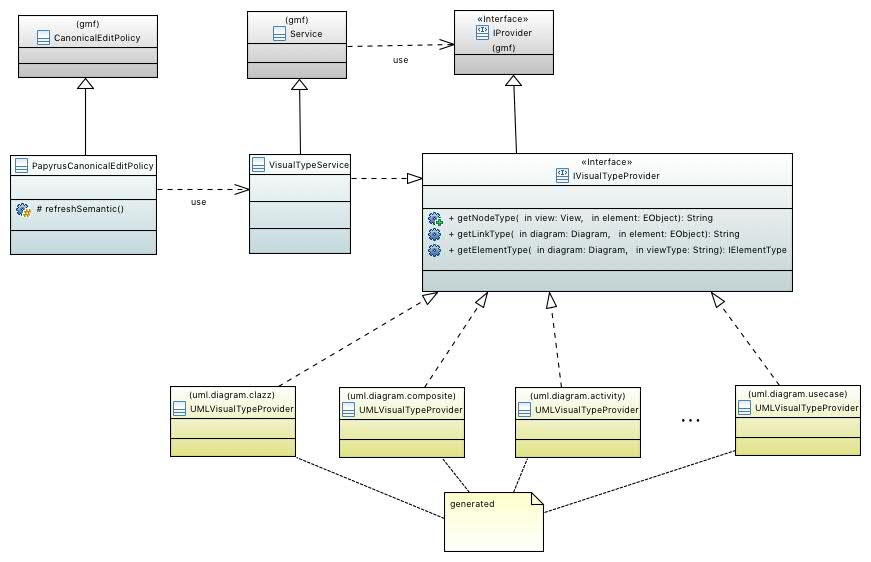 The PapyrusCanonicalEditPolicy uses a new VisualTypeService to query the following diagram-specific information that it needs to formulate CreateRequests to create new views for the semantic elements that it needs to visualize:

Thus the dependence on the diagram-specific drop edit policies is removed, as the canonical edit policy now has independent access to the visual type information that it needs, specific to each diagram. The generic CommonDiagramDragDropEditPolicy is also updated to use the new VisualTypeService to implement the previously abstract API methods that the diagrams' custom subclasses implemented to provide this same visual type information. As a result, diagrams that don't need special drop behaviour but only need drag-and-drop to create new views can be somewhat simplified.

A new code generation template is added in the org.eclipse.papyrus.def bundle that generates the diagram's contribution of a concrete implementation of the IVisualTypeProvider. The implementations of the provider API methods simply delegate to static APIs that are also generated for each diagram:

Because the APIs that the visual type provider delegates to are static, there is no way in the existing GMF/Papyrus frameworks to plug them into the core diagram layer without an intermediate object like the visual type provider. The generated UMLElementTypes classes do all include a TYPED_INSTANCE field implementing a DiagramElementTypes interface, but this, too, is a static API, so it has to be injected by code into any class that needs it. There is no facility for injecting these into a core component like the PapyrusCanonicalEditPolicy. Besides that the DiagramElementTypes API doesn't provide all that is needed in this scenario. So, the alternatives are to create a new template for generation of subclasses of the PapyrusCanonicalEditPolicy in each diagram (which would obviate the need for the VisualTypeService) or create a new template for generation of visual type providers. The latter seems a cleaner design, separating out the concern of diagram-specific visual ID discovery into a reusable component that may be of service to other clients than just the PapyrusCanonicalEditPolicy (such as, in fact, the CommonDiagramDragDropEditPolicy).

Because there is now a new generated visual type provider class, the GMFGen model for a diagram needs to be able to specify the name of the generated class, if necessary, and also a custom subclass for overrides of the generated default behaviour. This is a common pattern, especially in the edit-parts and edit-policies models. These use cases are satisfied by the addition of the GenVisualTypeProvider class in Papyrus's GMFGen extension model on the one hand and by registration of a higher-priority custom provider on the other (as is done for edit-part providers, for example). 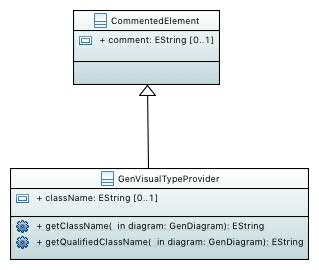 The custom drop edit policies of some of the diagrams are rather particular about what an element needs to be dropped on in order to add it to the diagram. For example, some connections cannot just be dropped anywhere in the diagram but only on a particular shape (perhaps one of its ends). In the State Machine Diagram, a region that is not the first region visualized in a composite state must be dropped onto some other region in order to partition the space that it occupies in two. To account for these cases, the Mars design included pluggable ICreationTargetStrategy extensions. These allowed the diagrams to re-direct the drop operation from the obvious target (the edit-part of the parent element) to some other edit-part. This mechanism is now no longer necessary, because the PapyrusCanonicalEditPolicy knows a priori which parent view must contain the node that it is trying to create, and the diagrams' view providers know how to create the child views (note that edges are a simpler case because they are all owned by the root diagram view).

Accordingly, the ICreationTargetStrategy API is deprecated in Neon and all implementations in the UML diagrams are deleted (the framework still delegates to these strategies if they happen to exist). The special case of regions in a diagram might have needed this target strategy but it is easily handled in the custom creation strategies for state machine compartment and state compartment using GEF's own getTargetEditPart(Request) protocol, for the case of the CreateRequest.

The Mars design delegated to the diagrams' generated drop edit policies. This required a mechanism to sidestep the CustomizableDropEditPolicy installed by the core Papyrus diagram layer to override the diagrams' generated policies, because it would not be desirable to let pluggable drop strategies interfere with the straightforward drop behaviour needed for view synchronization.

None of this encapsulation is needed in Neon, so the CanonicalDropObjectsRequest class is deprecated and the CustomizableDropEditPolicy no longer recognizes it.