What is it for?

The tool compares APIs exposed by two versions of your product. It reports changes that might break backward compatibility and provides a list of backward-compatible modifications.

Reports are produced as XML and HTML files. Here is the sample report showing APIs modified in a way that might break backward compatibility: 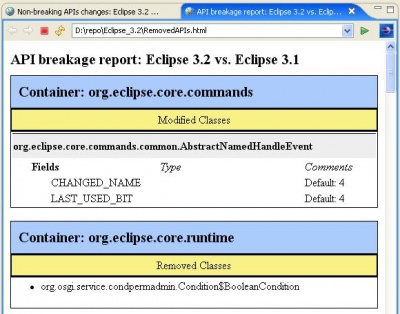 and here is the sample report on backward compatible API changes: 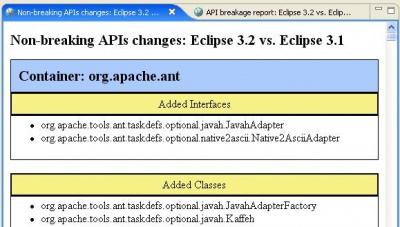 For OSGi bundles the definition of API is taken from the approach used throughout Eclipse and described in this excellent article by Jim des Rivieres: Eclipse API; in particluar, section "How to tell API from non-API".

API tools mostly follow API definitions outlined in that article. One thing that is evolved since that article was written is the wide-spread adoption of OSGi model. As a result, API tools use OSGi manifest to determine API packages (and don't use Javadoc presence for this purpose). All packages exported in manifest files are deemed to be API packages unless they have "x-internal" or "x-friends" qualifiers.

In order to reduce number of false positives during API comparison:

For non-bundles (Java JARs, etc.) it assumes that all packages are APIs unless they have ".internal" in the package name.

To allow for "special cases" API comparison tool has an exclusion mechanism - users can select specific API breaches not to appear on the report. The exclusions are specific, i.e., "removal of method ABC from class XYZ is OK". The vision for this is that exclusion mechanism will be superseded with Javadoc processing.

Some links useful in determining what is an API:

How does the tool work?

The tool contains two operations: create an API snapshot and compare the code against API snapshot.

Both operations can be accessed via menus or run in a batch mode.

The dialog to create API snapshot looks like this: 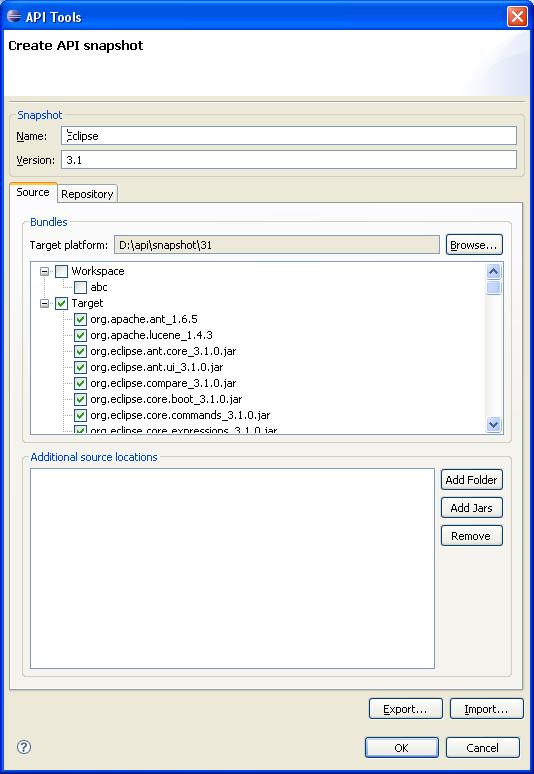 And the dialog to compare code with the API snapshot looks like this: 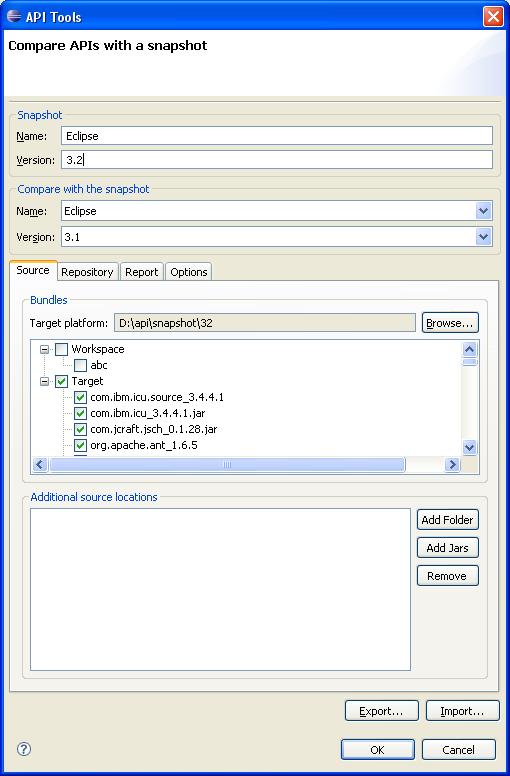 The tool can be used in the batch mode. The command line is:

Control file is an XML file that specifies repository location, location of the input or output, and a few options. Those files can be created from UI dialogs using "Export" commands.

Repository is a place where the tool stores API snapshots. At present the only type of repository supported is a folder on the file system. The location of the folder should be specified in the "Repository" tab:

Do I need to specify something else?

For comparison, report location should be specified on the "Report" tab:

This is the folder where XML and HTML reports will be placed by the tool.

While not a requirement, check the options tab:

Source code is stored in the PDE incubator (:pserver:anonymous@dev.eclipse.org:/cvsroot/eclipse) in the HEAD/pde-incubator/api-tooling/plugins.

There are two plug-ins:

The Eclipse 3.3M4 or later should be used to compile those plug-ins.