Navigate in a context from one object to another without creating and maintaining references between the objects in this context.

In order to implement a collaboration in a given context, objects may need to have references to each other. To create and maintain such references is not only cumbersome but may also lead to duplication of references which are already existing in another context between the same objects.

When the given context can access the references already existing in another context through objects being part of both contexts, this can be used in the navigation to avoid unnecessary duplication. This applies not only to direct references but also to any references which can be obtained by repeatedly making calls to objects already referenced directly.

Not only simple references are covered by this pattern but also references to array types. 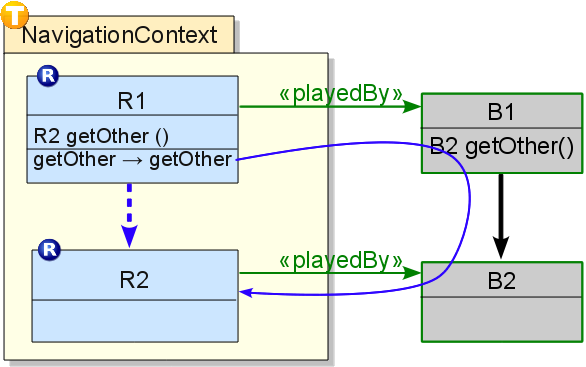 The role class R1 implements a service which returns a reference of role class R2. In order to obtain such a reference it uses a service getOther() of the base class B1. Because R1 adapts B1 through the playedBy relationship, it can access all services of that class as a callout ((OTJLD §3), i.e., as if it was calling them on itself. Therefore,

Due to this binding the return type B2 is automatically lifted (OTJLD §2.3) to the role type R2.

Role R1 need not store a reference to its acquaintance R2, but can reuse the existing link B1->B2.

Navigation will involve lowering, as method call to the base object and lifting, which might affect performance.

... (many uses exist, must mine for most illustrative example).